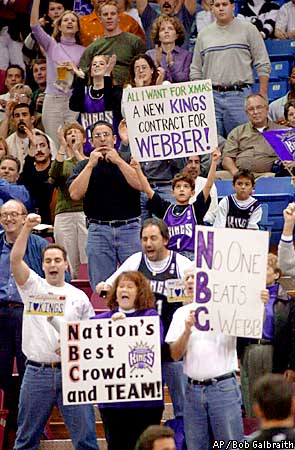 Statistics are an essential part of sports. Thereby, general mathematics explains that in a given sport there is roughly an average of 30 teams per professional league (MLB, NBA, NFL, or NHL). Though there are many well qualified teams who are title contenders, in any given season there is only one champion. All other subsequent teams have had "a disappointing season." Then assuming, for a second, if there were absolutely no chances of any team repeating a championship win, this would give each team a 1/30 chance to win a championship within thirty year period. ONE CHAMIONSHIP IN THIRTY YEARS!! The obvious reality is that there are a number of quality teams that win multiple championships over a thirty year span so that ratio actually becomes drastically expanded. That figure grows moreover when the new business management side of sports is included within this ratio.

If you are a big franchise then you comprise big money, big names, and big publicity. However, being a big market fan of teams like the Lakers or the Yankees is like betting (or cheering) for the house to win in Vegas. Though there is always a chance that outside players can beat the dealer, in some form or another, "the house always wins." Even if the Lakers or Yankees somehow do not win a championship, they are in the front of the line with cash in hand on the first day of free agency. They do some wining, dining, and then some big time signing of the small markets break out player from the previous season.

I admit that perhaps this logic is spawned out of envy that a smaller organization cannot or will not financially commit to a team the way the big city team does. But this concept has been a discussion of controversy for the past two decades. Is it fair that organizations search for ways to "purchase" a winning team? While Yankee and Lakers management rejoice a big acquisition they should also be reminded that other teams do not have the same luxury of steadily creeping around the difficult barriers of an off-season. Smaller franchises, instead, must leap over overwhelming obstacles to attempt to slowly piece together the perfect masterpiece of a true champion.

Dramatically viewed as a David verses Goliath like scenario, the smaller markets work with far less to achieve the same goals. They play in a less than adequate stadium, posses only one (if any) marquee names on the roster, and the publicity is primarily local. But despite all odds against the chance of a championship, these small markets comprise the most loyal and dedicated fans in sports. These extremist fans echo loud and abrasive sounds of hope year after year believing the same ridiculous and repetitive declarations, "Yeah, last year was bad, but I think this is our breakout year." This is OUR breakout year? These lunatics actually associate themselves with the productivity, and more likely the destruction, of a team that doesn't so much know that any such fan even exists. Why would people subject themselves to such torment and disappointment?

My mother does not follow football, but she hasn't missed a Superbowl in over forty years. Every year, with absolutely no knowledge of who is favored, the superstars on either roster, or even where the Superbowl is being held, she cheers for the team who has not won the championship in a long time, if ever. The explanation she gave me to why she chooses the underdog every season is because she feels that "each team deserves to have their moment."

As much as the team should have their moment, I feel that the fans deserve to live out their own triumph as well. Small market fans root for their team because of the tiny chance of justification. They hope to feel that all the highs, lows, heartbreak, ESPN updates, and constant constructive scrutiny must have been for a purpose. It is that very same optimism to which you have lost countless hands at poker, that same hope to which you've been left you stranded on the side of the road without gas when you thought you could make it, and that same pride which has made you scream bloody rage at the little men on your television set. You believe there is a chance. You yearn for that one perfect moment where all of your unnatural dedication comes together and coincides in harmony to Queen's rendition of "We are the Champions." Will that day ever come? Sure it will. Last year was bad, but I think this is our breakout year.