30Q: Will the Kings' Relative Lack of Assists Matter?

Share All sharing options for: 30Q: Will the Kings' Relative Lack of Assists Matter?

I didn't mean to have an in-depth, time-consuming 30Q on the Sunday of Labor Day weekend -- the one day in September few will be spending much time on the web. But Ailene Voisin made me do it.

Voisin penned a column for today's Bee on how the team needs to stay focused on ... Ricky Rubio over the next two years, because the Kings will need someone "to deliver the ball to" Tyreke Evans, Kevin and Spencer Hawes. She repeats the assertion that Evans is not a point guard, this time quoting Paul Silas. Voisin basically decrees that in two years, the Kings will have realized something she alreadys knows: Evans is a two-guard, a "point guard in an emergency only."

This is familiar territory for me, arguing that assists, in the end, mean little.

It's a subjective statistic subject to the whims of the scorekeeper, subject to the prowess of the players receiving the potential assists, and subject to more misunderstanding than any other box score digit. This is further complicated by the use of "assist-to-turnover ratio," which tells us nothing about a player's passing ability considering many turnovers occur in non-passing activities (traveling, offensive fouls, five-second violation, eight-second violation, double dribble, stolen dribbles, 24-second violations etc.).

There is no measurable relationship between assists and offensive performance. I graphed the assists per made field goal statistic and the offensive rating (points per 100 possessions) to show this. Assists per made field goal measures what percentage of a team's buckets come off an assist. Points per 100 possessions, or offensive rating, is a tempo-free measure of offensive quality. This graph shows the scatter plot for all 30 teams in the 2008-09 season. 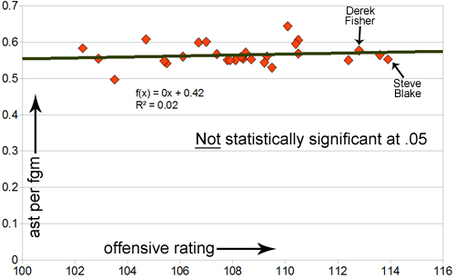 As you can see, the relationship is not evident. The correlation coefficient is only 0.14, the variance in offensive rating explained by assist/made field goal rate only 2%. And this is not statistically significant at the 0.05 level. So basically, assist rates have no linear relationship with offensive quality. You can have the worst offense in the league (Clippers) but still finish top 10 in assist rate, or you can have the best offense in the league (Blazers) and be middle of the pack in assist rate. I mean, the point guards of the top four offenses of the last season were Steve Blake, Steve Nash, Derek Fisher and Mo Williams. All four are fine point guards in their own right, but only Nash would be considered your prototypical pass-first PG. And obviously, Nash's Suns excepted, the top offenses are top offenses more because of guys like Brandon Roy, Kobe Bryant and LeBron James.

I'm not arguing passing skills don't matter, or that Rubio wouldn't help Thompson, Omri Casspi and Donte Greene gets easy buckets. But Voisin and others who still beat the Ricky-over-Reke drum base their arguments on this assumption that Rubio's virtuoso passing skills would automatically and without question raise the games of his teammates while Reke's virtuoso scoring skills help only Reke. As if Reke's 20 points are less valuable than the 20 points Ricky creates for JT and Omri.