Preview: Kings at Sixers, THE RETURN OF KEVIN MARTIN

Share All sharing options for: Preview: Kings at Sixers, THE RETURN OF KEVIN MARTIN 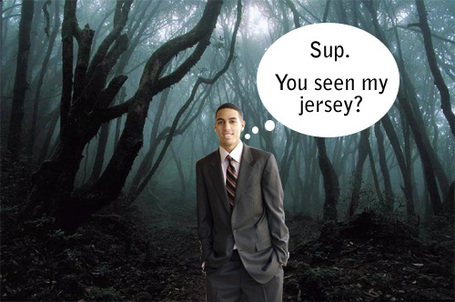 The Sixers, who the Kings faced in Sacramento two weeks ago, are an average offensive club and a devastatingly bad defensive club ... even worse than the Kings! (No small feat.) This is a big change, considering the team was good defensively last season. Eddie Jordan, eh?

The backcourt battle. The size problems this Sacramento backcourt could cause will be on full display, with Iverson and Louis Williams starting for Philadelphia. The Kings starters have a combined 10 inches on their counterparts. That's a big deal on offense -- it's not as if you'd think A.I. and Lou could guard Evans or Martin anyways -- but potentially also on the other end. Both Sixers have a quickness advantage, and we know penetration is devastating to the Kings defense. But in terms of challenging shots, the Kings could mitigate the overall effectiveness of the Sixers backcourt. Assuming the Kings get beat up again inside, a big points margin from the guard positions could prove vital.

Kevin Martin will score at least 20. So will Tyreke Evans.