Share All sharing options for: The Good, the Bad, and the Ugly Week 13 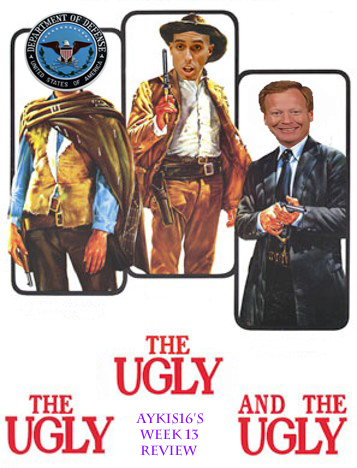 An 0-6 road trip. I guess I shouldn't be too shocked. This team is horrible on the road. But the manner in which they've lost these games? It was just a bad, bad trip, and this team needs to bounce back.

I lied about there being no Good category. Some people deserve it after a horrible week.

1. The Road Trip is Over

This grueling road trip is finally over, and hopefully with the return home, the Kings can find some confidence, which they seemingly forgot to pack for the trip. This was an ugly, ugly road trip. I wasn't too shocked by 0-6, but to have been down by 20 in almost every game at one point, thats just absurd for a team that had been playing much better earlier in the season.

Nessie continues to come in and play with a lot of intensity. He's probably our best post defender as well because of his strength and low center of gravity, which makes him hard to back down in the post. He's doing exactly what we want him to do, rebound like a fiend and play some defense. If he could hit that mid-range jumper which he's tried a few times now, he could be even better, but that would just be nit-picking.

Sergio only really got garbage time this week, but he probably deserved to play more. He comes in and ups the tempo, and surprise, surprise, the Kings play better in a faster tempo. I think we would have seen better results this week with Sergio getting more minutes, even though with Sergio, things can become really, really good, or really, really bad.

Donté hasn't become consistent on the offensive end yet, but his defense has been the best on the team. He stays in front of his man, he blocks shots, he bothers shots, it's really quite nice to see. I like him starting over Omri for this reason. Bring Omri off the bench as a scoring punch for the 2nd unit.

Spencer's stats aren't very gaudy this week, but he played well, took smart shots and rebounded well. Why didn't he get more minutes? Probably because his interior defense is iffy at best. Still he rebounded at a better rate than Jason, given that he had much fewer minutes. Right now Spencer is playing better than Jason in my opinion, although neither of them are playing great.

Omri is still playing with the same effort and intensity as he has been all year, but the difference is that his shot has seemingly left him. He only hit 1 three all week, out of twelve tries. It could be tired legs, it could be lack of practicing with Coachie. Whatever it is, he has not been stroking it well as of late. His defense and decision making could also use some work, probably more his decision making because he made some very dumb turnovers this week, ones that weren't forced either. I have high hopes for Omri, but he might need to dial it down a notch and play with a bit more control.

JT is visibly frustrated and he's letting his emotions take control of him. If he were a Jedi, he'd be well on his way to the dark side. He's not rebounding as well as he was, he's not making as many shots as he was, and he's getting into foul trouble again. He is still in a slump which I hope to see him get out of, hopefully against Golden State, who he LOVES playing.

Beno had two good games this week, against Charlotte and Atlanta, but had two horrible games against Orlando and Miami. Kevin's return definitely seems to have affected him the most, and hopefully we see a return to Wabeno soon, to keep the ship steady during the storms.

I've figured out Ime's go-to move. Park in the corner, when you get the ball, pump fake and drive and do something stupid with the ball. I would really like to see Ime just take that corner 3 more often instead of doing that infuriating move. Teams have caught on and aren't biting on the fakes at all, and it leads to a turnover more likely than not.

House Money actually rebounded ok for the minutes he played, but that was mostly against scrubs and it was unfortunate for the Kings that he had to play as much as he did. His offense isn't there, his defense consists of blocking the occasional shot and I think that Spencer and Jon are actually better interior defenders.

I almost bumped up Noc to the good for having the confidence to actually shoot the ball, but then I realized who I was talking about. Noc shoots a lot no matter how he's been playing and if the shots are dropping, its great, but when they aren't, its pretty bad. We need him to be more selective with his shots and not to shoot so often when he's not feeling it. I'm 95% certain Noc will be gone at the deadline.

We should have lost that game by 50. We could not buy a basket until garbage time and still only finished at 33% when we probably hit 70% of our shots in the 4th quarter. This game was definitely the worst of the season for the Kings. The defense didn't really exist, we couldn't take advantage of Orlando's many turnovers and shots were simply not falling.

Ziller put it best when he said the only two Kings with confidence right now are Tyreke and Noc. Everyone else is too scared to shoot or seem hesitant when they do. The team is visibly frustrated with themselves and things are not going well. That is not a happy locker room at the moment and hopefully getting home will relieve some of their probably tired legs. This team needs a confidence booster and I think a return to ARCO against fast-paced Golden State could be just that.

The robot that was built to take Kevin Martin's place in the lineup for this road trip was not built by a quality robot manufacturer, I can tell you that. Who would wire a Kevin Martin robot to be afraid to shoot the ball and looked to pass almost the instant it touched it? And to miss free throws? Poor manufacturing. They got the defense and foul drawing about right, but everything else was wrong. I can't wait till we can scrap the Kevitron and hopefully Kevin Martin makes his debut on Tuesday against Golden State.

Only 3 teams allow a higher FG% at the rim than the Kings (Minnesota, Golden State and Washington), but the Kings have a higher rate of opponent field goals made at the rim. Our defense gets a LOT better when we push teams out of the paint and make them take shots that are less than 10 feet, where we allow a league lowest 38.2%. At 10-15 feet we allow the 27th lowest FG% at 35.7%. From 16-23 feet we allow the 2nd best FG% of 42.3% but thats the most inefficient shot in the league. If we had a good interior defender, our defense might actually not be so bad. As it is, our defense is terrible, mainly because we have nobody who can guard the rim.

Tyreke is what made this road trip bearable to watch. He was at times brilliant. Besides Andres Nocioini, he was the only one who ever seemed confident at all with his ability to do anything. He put in the effort, and he was reason enough to watch this road trip. We've got a very bright future with this guy and I'm proud to say he's a Sacramento King.

This Highlight perfectly summarizes this week.

I just know that they set the floor over my car keys, but the reception on this thing sucks.

New from Johnson & Johnson: Matt Barnes – Good on the glass, great on the floors. 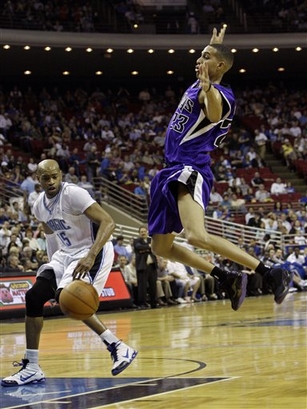 v. Golden State 1/26 W (Kings always match up well with GS, and they might not have Monta Ellis)

@. Utah 1/29 L (I don't trust the Kings on the road at all. Hopefully its at least competitive

v. Charlotte 1/30 W (Charlotte is great at home and horrible on the road, so the Kings could pull this one out)