Kings Preseason: Looking at the Stats

Share All sharing options for: Kings Preseason: Looking at the Stats

Now that the Kings are five games into the exhibition schedule, with a few days until the next contest, I thought it'd be a good time to take a look at the numbers.

Keep in mind that these are absurdly small sample sizes, and that non-rotation players have been playing substantial minutes for all teams. Take it all with a grain of salt. I just find the results a bit interesting.

All stats made possible by the incomparable Doug Steele.

Through five games, the Kings have an offensive rating of 98.8, 16th in the league. (For those unfamiliar with advanced metrics, offensive rating translates to points scored per 100 possessions. League average has been up around 107 in recent years.) Given the number of non-NBA players taking part in the preseason, and the shorter minutes for major players, and the experimentation with line-ups and systems, it's no surprise that offense lags in the exhibition schedule.

That should make you skeptical about the defensive rating as well ... not that it's particularly glowing for the Kings. Sacramento has a defensive rating of 101, currently No. 22 in the NBA.

One more note of interest at the team level: the Kings are at 35.8% on threes, middle of the pack in the league.

Player breakdowns after the jump.

* That said, Wright has hit some threes. Only Head has more makes, and (not counting Cousins) only Head and Marcus Landry have better clips so far. Extraordinarily small sample size, though.

* The team as a whole is shooting rather poorly inside the arc, with only Top Hat and Head really handling business there.

* Everyone but Greene has performed as well or better than expected at the stripe. 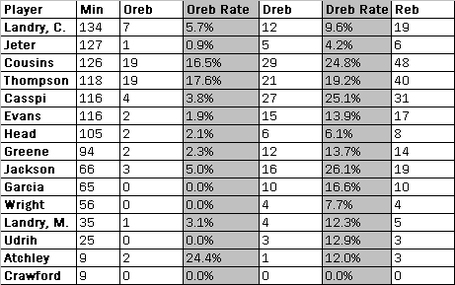 Evans has been good on the defensive glass; Greene is disappointing on both ends.

The passing and defensive numbers are so miniscule as to be completely noise, I fear.

DeMarcus Cousins is a beast. Tyreke Evans is still a beast. Jason Thompson is a handful on the boards. Carl Landry is a handful on offense. Luther Head is making a strong case. Omri Casspi and Donte Greene are TBD.