Pro Basketball Prospectus 2010-11 has been released for rabid fans to tear through. Written by Kevin Pelton and Bradford Doolittle, the book does much of what BasketballProspectus.com does -- delves into deep quantitative analysis to assess players and teams, trades and draft picks. Every player in the league is broken down in Prospectus, which alone makes the tome a valuable addition to your basketball library. (Hint, fantasy draft, hint.) The book goes deeper and longer than KP and Brad are able to do on the site, and it's handily portable. I can't tell you how many times I've referenced my 2009-10 edition over the past year.

Back when I first saw Pelton's SCHOENE team projections, I noticed that the Kings ended up with 43 wins in his system, just outside the Western Conference playoffs. I used the team projections to pull of a Watchability Index for The Works, and as that was the first wide release of the SCHOENE projections, it drew some attention from disbelieving fans. The Lakers at 44 wins? The Warriors in the playoffs? Boston barely over .500? How many wins for the Heat? Wait, the Blazers?

There's a lot of surprise in there, but KP's SCHOENE has a great track record. Since it's almost all good news for the Kings, I thought I'd do a short Q&A with Bradford, who wrote the Kings chapter of the book, which you can buy direct from BP or on Amazon. There's a PDF version as well as the deadtree edition. Both are excellent, though for quick reference I always prefer the pulp version.

After the jump, an excerpt from Pro Basketball Prospectus and our Q&A with Bradford Doolittle on the Kings.

The Prospectus fellows are very high on Mr. Tyreke Evans. Here's an excerpt from the Kings chapter on our star guard.

Evans headlines the backcourt, of course. Look, the comparables that SCHOENE generates are not meant to tell you that Player X is going to be just like Player Y. Instead, the system suggests the most likely path a player’s career is going to follow and says a lot about how much upside he possesses. Evans’ top two comps are about as promising as any Kings fan could dream of: Kobe Bryant and LeBron James. Evans has a long road to travel before he gets to the level those two megastars have reached in their maturity. Right now, all we’re saying is that at 20 years old, Evans, James and Bryant shared a fairly similar starting point. You have to admit, though, that’s a pretty damned good starting point.

The next major to-do item for Petrie and Westphal is to figure out what kind of a player fits best alongside Evans, who really isn’t a one or a two but just a guard. It may not even be accurate to call him a combo guard, because that label suggests a player that mixes in a little bit of the skills of both positions. Evans does everything, and he does it well with one exception- -his jump shot. Like Derrick Rose before him and, quite probably, John Wall after him, Evans is a John Calipari-mentored guard who just needs to develop some outside shooting touch to be a truly unguardable player. He shot .255 from three-point range last season and just 32 percent on long twos. If Evans can get above league average in those sectors, he’ll be an MVP-caliber player.

StR: You're very high on Tyreke Evans, not unlike a good many NBA observers. But it's interesting that Evans hasn't exactly been the golden boy of the metric-minded -- his per-possession shooting efficiency isn't great, and his assist rate is on the low side for someone who played point guard almost exclusively a third of the season. His defensive numbers also haven't been the best. Yet, his comps are amazing and PBP projects him as a superstar (and soon). What numbers or attributes beyond the surface really make Evans sing as a prospect?

BD: Kevin Durant was barely above replacement level during his rookie year because of how inefficiently he compiled his impressive superficial numbers. Nevertheless, we never wrote that he was a bust, or was overrated because what he had going for him first and foremost was a high usage rate. The ability to create frequent offense is a marker of a standout offensive player, and Durant upped the efficiency in his second season and became a star. We're seeing the same path for Evans. He proved he can create offense. Last year, he didn't do it efficiently. However, a .264 usage rate at the age of 20, to go with his other skills, puts Evans on an elite career path. His list of comparables includes names like Bryant, James and Anthony. As for his defense, we actually had him rated as a very good defender as a rookie. He started slow, but that rating just kept going up as the season went along. 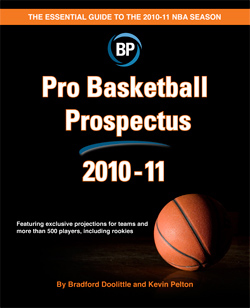 StR: When Omri Casspi came into the league, he looked like a tough hombre who would rely on broken plays and transition for his offense. Donte Greene once looked like a magnificent high-voltage scorer who wouldn't be worth a lick on defense or in any column but "points." Yet in the NBA Casspi has become a sort-of microwave scorer and Greene is the preferred versatile defender and for-the-love-of-God-just-take-open-shots offensive liability. What have you noticed about the players that speaks to their actual potential on the court?

BD: Greene showed a lot of growth in his second season. I didn't like him coming out of Syracuse. I thought he floated on the perimeter way too much and had "underachiever" written all over him. Last year, he had much better shot selection and his efficiency improved as a result. I think he's capable of creating more offense than he does, but unless he becomes a more capable passer, I'm not sure how much you want to put the ball in his hands other than in catch-and-shoot situations. His ceiling is very high--you can see flashes of his athleticism at times when he's on the open floor. He just needs to learn how to turn it into production. Casspi showed a more full-developed offensive game than I anticipated. He just needs to become more selective from the midrange. I know Westphal likes him coming off the bench, and that's fine depending on who the starting five turns out to be. But I see Casspi as a legit starter, and our system likes his defense as well. It'll be interesting to see if some separation emerges between these two guys. If I had to choose, I'd take Casspi, but Greene has a higher ceiling.

StR: Your essay goes into some depth about finding the perfect partner for Evans, with the takeaway being that a partner that doesn't create off the dribble might provide the best complement. How big a role does Evans' own court vision play in deciding who should be his backcourt mate? Can the Kings excel if Evans is the only big-minutes guard who regularly sets up his teammates?

BD: Here's the way I look at it. Everything the Kings do from now going forward is ostensibly to augment the skill set of Evans. Long term, I think you've got a good point. The Kings' offense will be more functional if Evans is paired with a guard that can take some of the playmaking load. However, in the big picture Evans is going to have to be the guy who is making most of the decisions in the halfcourt offense and clearly that's not his strong point right now. To me, that's all the more reason why you want to put him in that position as often as possible. Pairing him with someone like Beno Udrih might be the most successful lineup in the present. Down the road, it is essential that Evans becomes a player that makes those around him better, and not just because he ties up two defenders looking for his own shot. That's why I'd like to see him surrounded by as many shooters as possible, along with a top-notch pick-and-roll partner. The latter I assume will be DeMarcus Cousins at some point.

StR: Foul rate is one of the those metrics that usually becomes less of a concern as a player gains some experience. But some big men remain foul magnets as they become veterans. That's of specific concern to Jason Thompson and DeMarcus Cousins. At what point do you consider a player foul-prone for good, and not just as a young player? Is Thompson on the verge of crossing the threshold?

BD: Thompson's foul rate did drop a little last season. I don't think it's too late for Thompson to become a smarter defender and he's got enough athleticism that he shouldn't have to be so handsy. Pairing him with a legit defending big might really pay dividends for him because I don't think he's been as good a help defender as I think he can be. Fouls are a real concern for Cousins, who faces a similar learning curve on the defensive end. While I like an eventual pairing of Samuel Dalembert and Cousins once the former gets healthy, I'm not sure how much you want to ask Cousins to step out on the floor to defend face up fours, at least initially. It'll be hard to develop him if he can't stay on the floor.

Thanks again to Bradford for hooking us up with some inside insight, and KP for all his wonderful work as well. Remember: you can buy Pro Basketball Prospectus in PDF form or in paper. It's also on Amazon.