The View from section214 - Dinner with Geoff and Jerry

Share All sharing options for: The View from section214 - Dinner with Geoff and Jerry 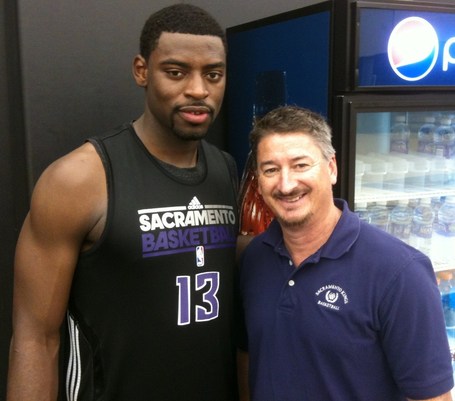 A few quick notes from tonight’s "Legends" dinner, an event for long-time season ticket holders (and dinner was delicious, thank you for asking):

· Noted that the real struggle of this team right now is on the offensive end of the floor.

· Everyone in the organization is disappointed in the recent play. Not wholesale change disappointed, but improvement is needed disappointed.

· Petrie remarked that good shooters can have bad nights, and that this has been a too regular occurrence lately.

· Regarding DeMarcus Cousins, Petrie said that his performance has been that of a rookie with a lot of promise and a lot of growth ahead of him. He anticipates more good and bad nights as the season progresses.

· GP stated that the defense would see marked improvement if the offense took better care of the ball, as the turnovers have led to extra possessions and easy baskets for the opposing teams.

· Cryptic as always, when asked about the CBA, Petrie said that we’ll know a lot more when we get closer to the June 31st expiration date. He said June 31st on two different occasions. Now playing it close to the vest is one thing, but when you start telling your fans to mark dates that don’t exist…

· Jerry said that he really enjoys being around this team, and that they are a great group. He added that he would enjoy being around them even more if the won more often.

· Jerry said the challenge with young players is that they have the knowledge, but lack the wisdom. As an example, he shared this pearl: "You can have the knowledge that a tomato is a fruit, but it takes wisdom not to put it in a fruit salad."

· Reynolds pointed out that historically point guards and bigs need the most amount of time and work to adjust to and grow in the pro game.

There was an extensive Q & A period, but most of the ground covered during this time has been reviewed around here already. There were a few things that struck me as amusing –

· A question regarding what can be done to help Cousins grow up. You could see Reynolds just dying to say something like, "The best thing we can do is allow him to get older," but somehow he refrained. I cannot imagine being under this type of scrutiny when I think of myself as a 20 year old.

· One fan suggested that the Kings follow the OKC model, and Petrie was quick to remind everyone that this model included a #2, 3, 4, and 5 draft pick over the span of three years, with one of those picks being Kevin Durant.

· A fan asked about free agent opportunities, and one fan mentioned ‘Melo specifically. Petrie was especially candid here, mentioning that Anthony had the leverage and was seemingly set on exploring New York opportunities. Petrie added that the Kings would not pursue a player like that unless a contract extension was in the bag, as the franchise could simply not afford to trade assets for anything less than a long term commitment.

· One fan seemed perturbed that the Kings had not, in his view, spent available free agent dollars over the past couple of years. Petrie assured the fan that the Kings would explore free agents when the right situation came along, but declined to correct the fan in regards to how long this cap space has existed. Simply, this past offseason was the first one in probably a decade where the Kings had workable cap space. Petrie alluded to the fact that the team did not have the space for the cream of the free agent crop. It is apparent that the franchise will not spend money at this point just to spend money.

Conversation starter via the poll -