Share All sharing options for: The Kings' (Three-Game) Defensive Renaissance

Last Friday, the Kings were 30th in the NBA in defensive rating. Paul Westphal inserted Donte Greene and Luther Head as starters over Omri Casspi and Beno Udrih. Casspi largely disappeared, while Beno still gets minutes (with Francisco Garcia get knocked back in the rotation). Westphal also went largely with a four-man big rotation prioritizing Carl Landry, Samuel Dalembert, DeMarcus Cousins and then, in lesser minutes, Jason Thompson.

Today, after three games, the Kings are 25th in defensive rating. Take a look at how much better the defense has been since the switch. 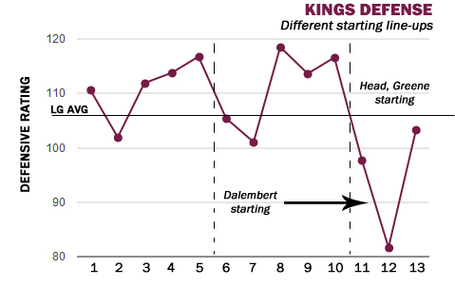 I didn't adjust for opponent offense, but note that the best defensive performance of the season -- Game 12 against New Orleans -- came against the No. 6 offense in the league, and the last game against the Jazz was against the league's No. 12 offense. That makes those performances (especially in light of those bad nights against bad defenses earlier in the season) stand out even more.

Westphal shook things up for the sake of defense ... and it looks like it worked.