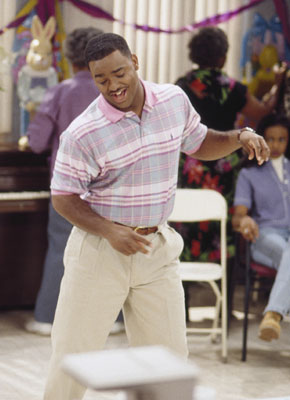 During the 1997-98 season, Billy Owens (above) was only one of three Kings to average better than 10 points per game. Owens was also a snappy dresser and a helluva dancer.

(To be filed under "Here’s hoping that history repeats itself" -)

I’ve been reading some of the comments in the threads lately, speaking of how this franchise has hit an absolute low point. These comments have merit. Unless you have been a Clippers fan for the past 30 years, it would be hard to fathom a more pitiful NBA existence than what we have seen here locally lately. Simply, this current Kings team is not a lot of fun to watch, and I think that it would be fair to call the season to this point a disappointment, even if you were one of the crowd that entered into this season with tempered optimism.

While success in the NBA is measured in wins and losses, the current state of the Kings calls for a different measuring device. Sure, wins would be nice, but what most of us want to see is progress from the young core of players. We are dying to see Cousins show some of his enormous potential, for Evans to take his game to the next level, for Casspi, Greene and Thompson to become more consistent and reliable. In a couple of games we will be 20% through the season, and we have seen very little to get excited about.

The natural (and sensible) reaction is to call for change. Change the players, change the coach, change ownership, change your drawers. Something stinks, and it ain’t Pooh.

But here’s the thing about change – you want it to be for the better. We’ve done change for the sake of change (Mussleman begat Theus, who begat Natt), and that didn’t work out too well. We’ve swapped Martin for Landry, and Nocioni and Hawes for Dalembert, yet we aren’t getting better. What gives?

To an extent, the Collective Bargaining Agreement is what gives. Come June 30 of 2011, the current NBA agreement between ownership and players will expire, and a player lockout looms on the horizon. And I believe that one of the reasons that the Kings did not delve into the free agent market this past year is because they are positioning themselves to be in a position similar to the one they were in when the last lockout ended in 1998 (note that I say one of the reasons – the fact that this franchise is on the cheap right now is a factor as well).

When I recall the time and team prior to that lockout, I find a few similarities, beginning with the state of ownership. For all of the hand wringing about those penny-pinching Maloof brothers and the tenuous status of the Kings in Sacramento, the situation was similarly dire back in 1997. The Kings ownership of that time had basically run out of money, and talk was that the team would eventually be sold, and probably moved as well. The Maloof family came in and purchased a minority limited partnership in January of 1998, and the Kings were supposedly on their way to play at "The Pit" in Albuquerque if you were to listen to the pinings of some. A year later, the Maloof family purchased a controlling interest in the team, which did not exactly ease the fears of some.

During this season of transitional ownership, the Kings sellout streak came to an end, drawing a little better than 13,000 people on a few nights. The Kings were led by Mitch Richmond, a multi-talented player and All-Star. Richmond had made it clear that he was fed up with his contract, and playing in the NBA’s version of Siberia didn’t help his attitude. He still played his heart out, but he was now being branded by a few lunkheads as a loser. The second best player on the team was Corliss Williamson. Once more for emphasis – the second best player on the team was Corliss Williamson. Don’t get me wrong, Corliss was as class as a class act could be, and he would later become an integral part of a championship team as a 6th man. But Corliss Williamson was never meant to be the second best player on a competitive NBA team. Aside from Williamson, only Billy Owens accomplished double-digit scoring for the season, at a robust 10.5.

This team included Olden Polynice and Michael "Yogi" Stewart and Lawrence Funderburke and Mahmoud Abdul-Rauf and Terry DeHere and Lawrence Funderburke and Anthony Johnson and Tariq Abdul-Wahad. Michael Smith and Bobby Hurley and Otis Thorpe had abbreviated runs on this squad. All in all, it was a group of serviceable pros, largely bereft (with the exception of Richmond) of true NBA star talent. The squad went 27 up and 55 down in 1997-98. They were actually 24-29 before dropping 26 of their final 29 games.

This team was coached by Eddie Jordan, a man that had the support of General Manager but ultimately not ownership. Jordan was replaced by Rick Adelman just prior to the lockout of 1988.

The timing of the lockout was rather precarious for city of Sacramento. There was talk that the Kings may have played their last game in Sacramento, despite the reassurances of the Maloof family that they were not going anywhere. Season ticket sales took a hit as a result of the lockout, and the next sellout streak would not begin in earnest until May 2, 1999.

But the lockout did provide for the perfect storm of events for the Kings. Predrag Stojakovic was coming over from Europe and joining fellow rookie Jason Williams. Richmond was traded for Chris Webber, though he was initially even less thrilled about coming to Sacramento than Richmond. The Kings paid Vlade Divac what no one else could really afford, and Jon Barry and Vernon Maxwell were offered a larger piece of pie as well. They picked Scot Pollard up off of the scrap heap about a dozen games into the 50-game season. And the golden age of Sacramento Kings basketball was born.

I bring all of this up for two reasons. First, while the current Kings team may be painful to watch, it is not exactly new to anyone that rooted for this team prior to the lockout of 1998. Not that this should make anyone feel better – sucking is sucking. But if there is a reason why some fans are more philosophical than others when it comes to the current state of the Kings, it is because they have seen this before. And while we didn’t like it, our Pavlovian response is that something tasty must be on the horizon.

The second reason is that I’m really not sold on any knee-jerk moves at this point in time. A band-aid is not going to stop the bleeding on this team – a tourniquet is needed. And I only see that happening in the offseason, and only after the new Collective Bargaining Agreement is in place. At that point, the Kings should be buyers in a seller’s market. This does not mean that they should turn a blind eye to any deals that could improve them right now. It just means that I am resigned to the fact that given the timing and circumstances, this is another transitional season for the Kings.

Now, a transitional season should not be a lost season. The youth on this team must progress, to prove themselves as either a future component of the Kings or as a valuable trade chip. And management and the coaching staff needs to figure out how they are going to get to that place, and they need to get there quickly. As I said, the season is nearly 20% over. Time’s a wastin’.

Oh, and about that head coach. Westphal was brought in on the cheap, and he may go out that way. He is a short term caretaker, not a long term solution. That said, the next Kenny Natt is not going to get a whole lot more out of this current roster. Unless the Kings have the opportunity to go big, I don’t see the need to jettison Westphal right now, unless he has lost the team. Scott Brooks did a 180 with the Thunder a couple of years ago when he replaced P.J. Carlesimo. Could Mario Elie do the same thing? Brooks was smart enough to move Durant from the 2 (where P.J. had him) back to the 3, and the team has been on the uptick ever since. If there is such a player as Durant and such a move to make on this Kings team, I don’t see it. To be clear here, it’s not that I would shed any tears if Westphal were relieved of his duties. But please, for the love of Jerry Reynolds, no more changes just for the sake of making changes. However, if Westphal is unable to get through to his young troops, a change will need to be made. The Kings cannot afford any further devaluation of these young assets. Westphal must figure out a way to help these young players succeed.

So my recalibration for 2010-11 is now complete. 14 games into the season and I’m not worrying about the number of wins this team amasses this year. The way I see it, this team cannot be fixed this year. It will take the massive moves that are more likely to occur on the other side of the impending lockout (yeah, for as optimistic as I like to be, I think that at least part of next season will be lost to a lockout). My larger concern is the development of the player assets that are currently on the roster.

Recapping, I guess what I just said is that it sucks so much to be a Kings fan right now, even the lockout looks good.

Man, this optimism thing is harder than it looks.