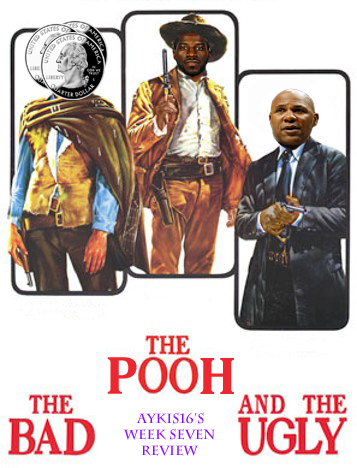 A bit of a roller coaster type week for the Kings, disappointing against the Clippers once again, showing signs of brilliance against the Wizards, and showing good effort but just not having enough talent to beat the Heat.  Still, it definitely hasn't been as bad as the last few weeks were.

The biggest benefactor of the new up-tempo style the Kings have played (sparked by Pooh) has been Omri Casspi.  Omri's remarkably quick for a man his size and he gets down the floor with ease.  Omri had two 20 points games this week, and his defense has also picked up as well.  Omri is also the most consistent shooter the Kings have, now at 41% from 3 for the season.  Omri might not be starting, but if he keeps playing like this, he'll further cement his grip (in my mind at least) as the Kings SF of the future.

This win, and this manner of win, was sorely needed.  The Kings have definitely had a frustrating season, so it was nice to see them win a game that I thought they should win.

Remember last year (check games 5-9, and 20-26), when Jason had a stretch of games early in the season where he was playing like an All-Star?  Well he's back to playing with that type of confidence at least.  His jump shot is going down and he's playing solid defense too.  He's staying out of foul trouble for the most part too.  He also brings another guy who can move the ball around to our lineup as well, something Carl doesn't do too well.  I don't know if those rumors about the Kings shopping JT were true, but if they were, I'm glad other teams didn't bite.

5.  Tyreke Evans does not have a stress fracture

I cannot repeat how good this news is.  Stress fractures are very serious.  Plantar Fasciitis is too, but a fracture would've meant trouble.

Yeah I rag on him for his offensive ineptitude, but a bit of that isn't his fault, but how the Kings use him on that end.  He does a great job on the boards and at protecting the rim, basically the two things we traded him for, and I think that needs to be acknowledged.  Also, it shows what kind of man he is that he would fly back to Philly to attend the funeral of the beat writer who covered him for most of his careers.  Cheers Dali.

7.  Defense in the 1st Quarter of the Miami Game

This deserves its own category, because the defense in that 1st quarter was just the best I've seen this team play in a long time.  The rotations were perfect and the effort was there.  Defense is hard work, but it pays off.  I hope Westphal shows the team that 1st quarter on tape, and demands the same type of effort and execution for 48 minutes.

The Kings have definitely had a big problem coming out of halftime, against the Clippers and Heat especially.  This has been a problem for a lot of the season, and it needs to change.  Its good to come out of a game strong, something we've done rather well this season, but we need to keep that energy coming out of the half as well, because if we don't, we either let the opponent build up a bigger lead if they were in the lead, or we let them come back into the game and take the momentum away if we were in the lead.

He just isn't the same player.  As a fan, I appreciate how he's opting to play through the pain, but he's just not having the same effect on the games.  He knows it, Westphal knows it, and we know it.  I'd sit him and let him rest.  We don't have anything to lose by doing so, since we're not in playoff contention or anything.  I also don't want to see him get more hurt by playing through it and aggravating his Plantar Fasciitis even more.

Cisco is a great leader/mentor off the court, but on it, he's a mess sometimes.  He was terrible defensively all week against whoever he was trying to guard, and he didn't hit his shots with consistency either.

4.  Beno getting too carried away

At times (the Wizards game) Beno will be great.  Simply marvelous.  But then there are the times where Beno tries to do too much and it ends up digging the Kings a hole they very seldom can afford to dig.  Beno is nice in spurts, but I feel it is safe to say that the Kings will not make the playoffs anytime in the near future (near future being 1-2 seasons) with Beno as their starting PG.  An upgrade is definitely needed.

This has been a problem with Donté for his entire career to date.  He'll shoot extremely well one game, then horrible the next.  Unfortunately this year, the horrible games have happened more than the good ones.  This week he was 2-10 from three.  He's much better when he takes the ball inside though, but this team needs him to be able to space the floor.  I do have to give him praise for being one of the few Kings who consistently cut to the basket for easy opportunities.

Seriously?  I'm getting sick of how often I've had to include a DUI into these posts.  I don't want to write about one again.  Just a stupid decision by Elie, and its likely he's suffered a big stepback in his goal to be an NBA Head Coach.

2.  Getting Outrebounded by 21 to the Heat

The Kings as a whole average 1 more rebound per game than the Heat have this season, but got severely outworked on the glass by the same Heat team.  Sure we missed way more shots than they did, but that just makes their offensive rebounds all the more valuable.  With our big size advantage, we have to control the boards regularly.  We have to.

We're back to being the worst team in the NBA, with a team many thought'd be better than last years.  Expectations are a b*tch.

Carl Landry had 1 Defensive Board all week, in 65 total minutes.  5'11 Pooh Jeter meanwhile had 12 in 60 minutes.  Carl is dead last on the team in defensive rebound rate.  That's not only embarrassing, but its just unforgivable from a Power Forward, especially when he hasn't been making up for it with his offense like he was last year.

Disgusting how many there were by the sound of the TV.  This was even worse to me than the Bandwagon Laker fans, because at least they're in California, and at least they've won something.

Pooh showed this week what a real floor general and leader could do for this team, almost single handedly leading this team back from a deficit and near victory against the Clippers, and also helping spark the blowout against the Wizards.  He was more reserved against the Heat, but its a bit hard for him to get out and do his thing on the fastbreak when the other team doesn't miss and can set up their defense.  Pooh was active on both ends of the court, and he acted both as a facilitator and scorer.  He's earned the nickname "Spark' for his play off the bench and for good reason too.  Perhaps more importantly, Pooh has helped make this team fun to watch again, and for that I applaud him.

I know what you're thinking -

"Has he banned six trolls or only five?" Well, to tell you the truth, in all this excitement I kind of lost track myself. But being as this is the StR Ban Hammer, the most powerful ban hammer in the world, and would blow your membership clean off, you’ve got to ask yourself one question: Do I feel lucky? Well, do ya, punk?

AHHHHH!!! everyone run away, its a rebound!!! 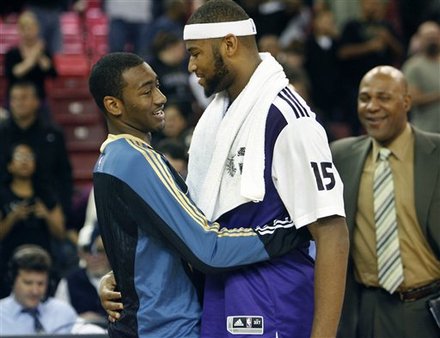 This could be the most epic Caption Contest ever. Don't let me down.

This week's caption contest winner will get an Autographed Mario Elie shot glass.

December 15th is coming up next week, marking the first day players signed over the summer can be traded.  Do you think the Kings will make a move at or around that day?

@ Houston 12/14 W (Houston's a better team than we are, but we also have some advantages on them, mainly size wise.  Hopefully for once we can take advantage of it.)

@ New Orleans 12/15 L (We played the Hornets well last time but it was a very slow paced game.  We'll see how CP3 does against our more offensively oriented lineup, but I don't think we'll shut him down again.)

@ Oklahoma City 12/17 L (Kings have problems fouling shooters.  Westbrook and Durant are among the league leaders in FTA, and the Thunder lead the league in FT%.  We're screwed.)

Nostradumbass Record for the Season 12 - 11