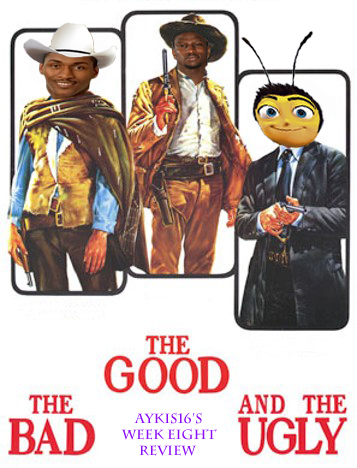 See what I did there?

The first three game road trip since the start of the season ended in an 0-3 Kings trip, as has been the norm lately, with the Kings now again holding the worst record in the league and having now lost 17 of 19.

1.  Tyreke Evans is Back

If there is one player the Kings can count on providing a decent scoring punch night in and night out, its Beno Udrih.  This week, Beno was the only one who seemingly didn't give up against the Hornets, and against the Thunder he dropped 19 on 9-12 shooting.  He definitely has his deficiencies, where he gets too careless/reckless at times, and he's a terrible defender (although he definitely tries and can play the passing lanes) and giver of And-1s, but his offense has been something we have come to rely on and need to stay competitive.

The difference in DeMarcus Cousins game from the beginning of the season to now is very noticeable.  He's a lot more patient on the floor already, and he's making smarter decisions on both ends of the floor.  His efficiency has increased as well, and he shot 53.8% in the three games this week.  He still makes some dumb mistakes (those travels down the stretch of the Hornets game especially) but he's learning from them, and a lot faster than I thought he would be too.  Keep it up big fella.

To make room for Terrence Williams, the Rockets paid the Kings cash to take on 15th man Jermaine Taylor, a 6'5 guard who hadn't played much on a team strong at his position.  Taylor is extremely quick and athletic, and could possibly fill in well for when Tyreke is on the bench, as he also attacks the rim constantly and aggressively.  He can't be worse than Antoine Wright, so I don't see how we'd hurt from playing him every now and then.  If it works out, cool.  If it doesn't, oh well.  This is basically our Dominic McGuire trade of 2010-11.

5.  You Guys Came Through

I'd like to thank everyone who came through in the 11th hour and bought tickets to StR Night III: Elect-Reke Boogie-loo for this upcoming Tuesday.  We only needed to sell 11 more tickets to secure a meet-and-greet with Bobby Jackson, and we ended up selling 24 more.  So thank you guys, and if you are coming to the game, I'll see you there.

Mind you he still wasn't as good as he was last year, but he was better.  Better enough to actually warrant his playing time.  But the Kings really need to somehow set him a limit on how many jumpers he can take.  One or two is fine, but I hate seeing him shoot those 20 footers early in the shot clock when he's so good around the basket.  Look at his Shot Selection over the years: He finishes at an EXTREMELY high percentage around the rim, but he's attempting more shots from 16-23 feet (where he's only shooting 35%) than he is at the rim.

1.  Hassan Whiteside Not Getting Enough Playing Time in Reno

E-Muss for some reason is not playing Hassan Whiteside very much despite the young big man staying out of foul trouble and being the teams best shot blocker.  Over the last three games, Whiteside has only played a combined 46 minutes, with only 5 fouls in that time, so foul trouble hasn't been an issue like it was at the beginning of his D-League run.  Hassan is only averaging 13.4 minutes per game as a Bighorn, and yet is 2nd in the entire D-League in blocks per game at 3.43, with the 1st place guy being Magnum Rolle, who has only played two games and averages 27.1 MPG.  Someone get E-Muss on the phone and tell him to play the young guy more.

The Kings really didn't get any good production at all this week from any of their main wings.  Not Donté, not Omri, and not Cisco.  Against Oklahoma City those guys combined for 6 points on 3-15 shooting, and although they were slightly better against New Orleans and Houston, it still wasn't nearly enough.  All three of those players have had bigtime consistency problems this year, and this week was only different in that they were consistently bad.

The Kings have had a tough time establishing their players down low, especially Carl Landry.  DeMarcus does a better job at fighting for position, but the team still get the ball to our bigs way too high on the perimeter and that's a recipe for disaster, either from Carl shooting a jumper, or DeMarcus trying to take it to the basket and traveling.  Opposing defenses do a good job at fronting us, but we have to learn to beat that and not give up so easily on establishing our big guys, because they are so darn good down low.

Speaking of not taking advantage of our big guys, our team was outrebounded in each game this week.  Not by much, but still.  A big problem there is having Carl Landry as one of our main rotation bigs, as he is the worst defensive rebounding big man in the league.  He's a worse defensive rebounder than a broken down Peja Stojakovic.  That's terrible, and its a big reason teams are killing us on the offensive glass.

Sort of as expected, Jeter had a bit of a regression to the mean week this week, and for this blogger's sanity I'm glad it came.  I don't know if I could've read one more comment suggesting that he was our PG of the future.  Jeter is a nice backup guard... on a 5-19 team.

The perimeter defense of this team is still pretty pitiful.  Against the Thunder especially, their guards and wings were able to get inside at will, our bigs had to collapse, and this led to easy layups at the rim for guys like Nick Collison or Jeff Green.  This likely won't improve without a trade, because we simply don't have the personnel to put out a good defensive team without sacrificing most of our offense.  On a sidenote, the Kings could take some notes from how the Thunder were able to penetrate and dish to their guys at the basket considering they have one of the best players in the league at getting to the rim and forcing defenders to collapse.  That also is on Tyreke too to focus on distributing the ball there instead of forcing a shot.

All year the Kings have given up big runs to opponents, but this was by far the biggest one yet, as they had a 23 point lead on the Hornets in the 3rd quarter and they ended up losing by 3 (but really 6 since Jeter hit a three at the buzzer).  The Kings stopped doing what they had been doing to get the lead, and by the time they tried to get back to it, the Hornets had all the momentum and there was no stopping them.

When we traded for Dalembert, a lot of us hoped that he'd be the defensive/rebounding stalwart we had needed, who would also be able to take enough minutes to soften the NBA transition for rookie DeMarcus Cousins.  It hasn't turned out that way though, as Dalembert only played 32 minutes all week.  Right now this trade is looking more and more like a salary dump than the talent swap many saw, which is fine, but many of us expected more.  As we've all found out this season, expectations are a b*tch.

Have you seen them? They look nothing like the players they're supposed to portray.  I remember the old Carl's Jr. ones (what do I mean I remember, they're right behind me) looked just like them.

At the beginning of the week, it was unsure whether Tyreke would be playing at all.  Then he missed the Houston game and to me at least, it seemed for sure that he'd be out for the road trip.  But against New Orleans and Oklahoma City, especially in the first half, he looked like the Tyreke of old, maybe even slightly better due to his improved jumper.  But the most important thing is that he seems to be getting his aggressiveness and rim-attacking ways back.  Hopefully that means that maybe he's feeling less pain (although it certainly can't have disappeared completely so soon) and he'll get back to his consistent 20-5-5 self in no time.

You can't see the jersey...

Look, I know all this losing is frustrating for everybody, but isn't the team we're trying to model ourselves after the Oklahoma City Thunder?

Anyone remember the 2008-2009 Thunder? You know the ones that had Kevin Durant and Jeff Green in their second years with this rookie named Russel Westbrook? The same one that started the season 3-29 and had all the analysts debating whether they were going to be the worst team ever? Those kids turned out ok. Give us some time, we’ll figure things out.

Nobody puts Boogie in the corner. 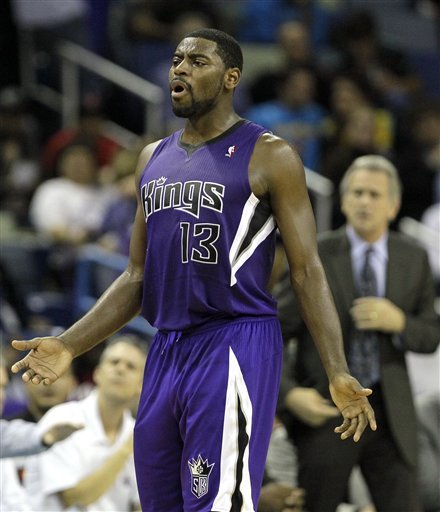 This week's caption contest winner will get dribbling lessons from Luther Head.

Do you think newcomer Jermaine Taylor will be able to provide anything other than the cash that he was traded for?

My opinion: He can't be worse than Luther Head/Antoine Wright so yes.

Screw it lets go Optimist Prime. Explanations in the voice of Paul Westphal.

v. Houston 12/19 W (We're at home and we're pissed.  We can do this.  We won't have to play Luther Head at all this time, and Jermaine Taylor will tell us all of the Rockets secrets.)

v. Golden State 12/21 W (Alright! We've got some momentum going from a good win against the Rockets, and now there is this crazy group of guys chanting "Peaches" in the stands! I don't know what that means but lets roll with it!)

v. Milwaukee 12/23 W (You better watch out Ersan or Tyreke is going to give you more than a concussion as payback)

Nostradumbass Record for the Season 14 - 12