Share All sharing options for: Vladimir Radmanovic Opens the Gates to Nirvana

Still painful to watch Vladimir Radmanovic's game-winning three to send Kings vs. Warriors into overtime? Here's a silver lining: imagine how much more stomach-turning it'd be if the Kings were in the playoff hunt.

Here's another silver lining: by watching this single play, you too can discover complete enlightenment as to why the Kings suck.

Situation: the Kings lead by three with two seconds left. The Warriors are out of time-outs and have hit 4-8 from the line in the final moments, so scoring a two and playing the free throw games is absolutely off the table. The Warriors need a three. With two seconds left, the options to get that shot involve no more than one quick pass after the inbounds, or 1-2 quick dribbles. In other words, if the Warriors inbound the ball to a player inside the arc, that player would have to make an immediate pass to a player outside the arc, or would need to able to take one dribble to behind the arc, turn and shoot. They say stuff like "two seconds is an eternity," but it's not. It's two seconds. Click-click.

Here is how the Warriors are set up for the inbounds. 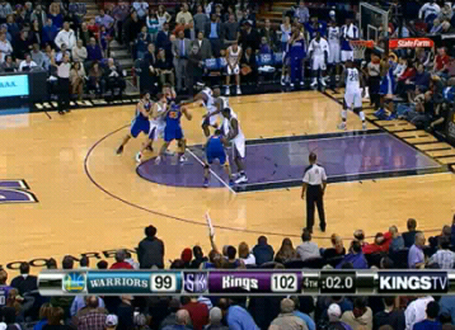 Four three-ball shooters on the floor -- three in play, with Donte Greene guarding Dorell Wright on the inbound; Wright won't have time to get the ball back. DeMarcus Cousins has a hand on David Lee, the only non-shooter for the Warriors. Darnell Jackson is a solid 5-6 feet from his man, Radmanovic, with the No. 2 Golden State threat -- Reggie Williams -- and his defender (Beno Udrih) between them. Tyreke Evans is guarding the No. 1 option, Monta Ellis, closely. 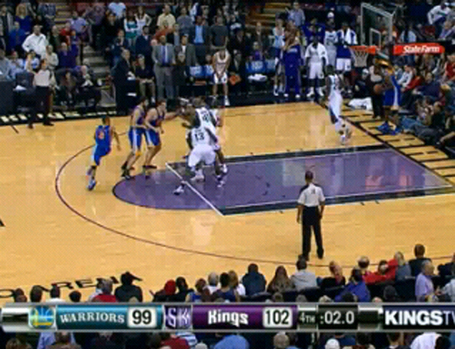 Lee and Williams cause a scrum at the free throw line, effectively screening Evans as Ellis goes over the top toward the left corner. Greene is watching. 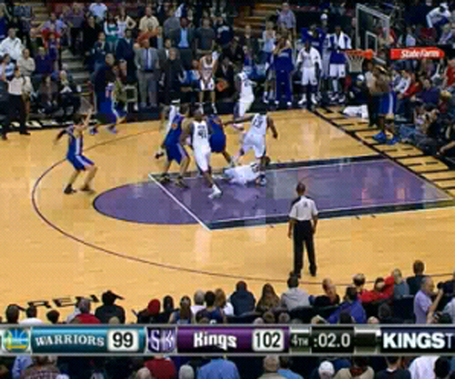 Let's count the Kings folllowing Ellis. There's Greene slipping over, as he should. One. Cousins, guarding a non-shooter, turns his attention. Two. Jackson, now 8-9 feet from his man as Radmanovic slides backward, is trying (in vain) to shove past Lee to get to Ellis. Three. Evans is still chasing (four), though he's having trouble getting over Udrih, who tripped, slipped or otherwise fell. Was Beno chasing Ellis too? Or did he see a Slovenian mob boss waving an Uzi in the stands? But Beno is looking at Ellis, so we'll count him as five. Five Kings completely focused on one Warrior, who does not yet have the ball. 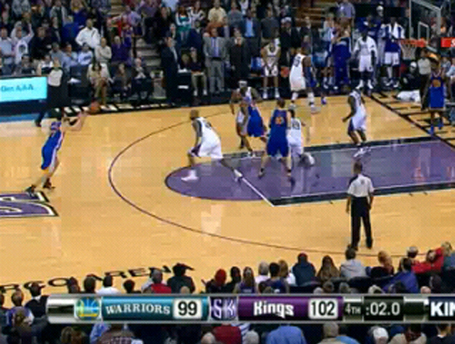 Here comes the pass to a completely wide open Vlad 25 feet from the basket. There are two Warriors in three-point shooting position as Wright passes the ball, and all five of the Kings defenders are watching one of them and/or laying on the ground. As the passes come in to Vlad, Jackson tries to make up the 11-12 feet of distance to challenge the shot. 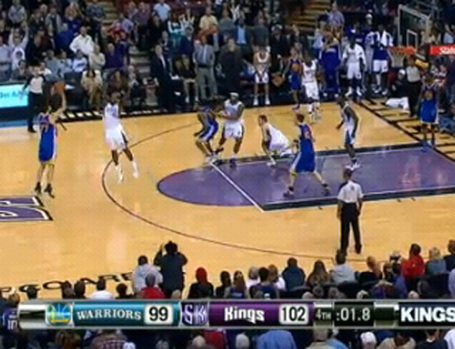 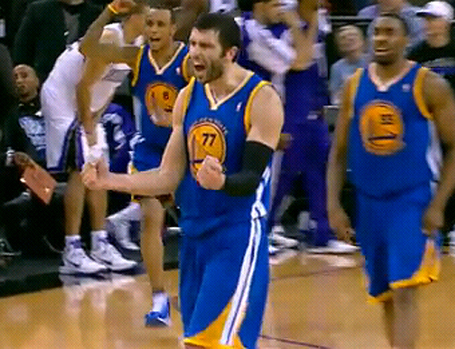 The Kings are surprised by the simplest things. Constantly. Five people do not need to guard Monta Ellis. No one needs to be hangin' in the paint, guarding David Lee. Vladimir Radmanovic -- Vladmir "The Space Cadet" Rad-farking-manovic -- outwitted the entire Kings team. Monta Ellis is a goat standing on a mountainside on the eastside of Highway 1, and Vlad Radmanovic is the Pacific Ocean, and the Kings just careened off the cliff and fell into the sea. :-(