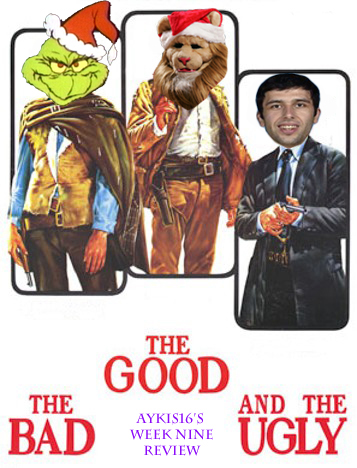 Hope you all had a great Christmas! Except you Vlad Rad.

This was possibly the toughest week Kings fans have had to endure in quite a while.  Three games were in our grasp, ripe for the taking, and three games the Kings collapsed in, and now the fanbase, the players, the coaches, and the ownership are at their wits end.

D-Block has seen his share of DNP-CDs and limited minutes this week.  He was promoted to the Starting lineup this week due to Jason's injury, and he came in ready to play, rebounding, playing defense, and setting good screens.

In every single game this week, the Kings had a chance to win, before faltering late.  If they can just learn how to close out games, and play down the stretch like they played during the rest of the game, the wins will come.  But that's easier said than done, and its up to the players to execute.

Other than the Golden State game, Carl didn't put up gaudy numbers, but he does seem to look like old, good Carl lately instead of new, bad Carl.  With Tyreke suffering, and Cousins on the bench, the team will need him to carry most of the offensive load, and he'll need to be up to the task.

Sammy D did an alright job off the bench, but its clear he prefers playing as a starter, and he did a pretty good job most of the game against Bogut too, before foul trouble eventually knocked him out.

Hey we actually hit a decent percentage of them this week (80.6%)!  Now lets just continue to do that for the rest of the season.  No excuses now.

1.  Jason Thompson out with Stitches

Its never good when a main rotation player is out, and the team missed JT this week I think, especially against the Warriors.  I don't think he would have left Vlad Rad.  I have no way to prove that, but there you go.

Hassan leads the entire D-League in Block Rate and Blocks per Foul.  Yet in his last game, he only played 2 and a half minutes.  I wouldn't be surprised to see him get called back up to the team soon if this continues, as the whole point of him being in Reno is to get court time.  Unfortunately as the Kings don't own the team, they can't force E-Muss to do anything other than to have him on the roster.

More than anything I think the wing position has proven to be our weakest link so far this year.  Donté isn't the defensive savior we hoped he'd be, even though he can be quite good at times, and none of our wings can consistently hit wide open shots.  Donté will chuck up a ton more threes when he's not hitting in order to try to get a rhythm going, and Omri shoots a ton either way.  Cisco will take any open shot you give him, regardless of whether the situation calls for it or not.  The Kings need a consistent wing player and none of these three are doing it for me right now.

I don't know if I've seen a worse shooting week from this team in a while.  Each game, the team shot 39% or below, while the opposition was 43% or above.   A lot of this has to do with our execution down the stretch, and those stretches where we seem to forget whatever we had been doing the previous ten trips down the floor that had worked.  It's extremely frustrating.

5. Switching and Guarding the Corner Three

Here's the secret to get a good 3PA on the Kings: Move the ball a lot, run off the ball, make sure you have a good to decent shooter parked in the corner, and once the Kings get caught on a switch, swing the ball over to him for what is likely a wide open shot.  The Kings have been getting killed by bad switches all year and I wouldn't be surprised (if this continues that is) that when we play the Spurs they shoot 50+% from three (they love their corner threes).

Tyreke shot 52 FGA this week in 3 games.  He only made 12.  That's an abominable 23.1% from the field.  Tyreke's foot is either hurting him a lot more than he's letting on, that undisclosed personal issue (which I have a nasty feeling is going to come out somehow now that its been mentioned) is really weighing on his mind and affecting his game, his confidence is absolutely shot, or all of the above.  His decision making has been pretty terrible as well, turning the ball over at critical junctures, and taking terrible shots out of the flow of the offense.  The one area that Tyreke hasn't really struggled with though has weirdly enough been his defense, as he's actually looking pretty good in that area.  The good thing with Tyreke is that we know how good he can be, and hopefully we'll see the return of the old 20-5-5 Reke, sooner rather than later (20-5-5 this year seemingly refers to his shooting percentages).  Its no wonder this team is struggling when the best player has had a terrible season.

If you haven't heard by now (like you have something better to do than read about the worst team in the NBA on the reg), DeMarcus Cousins was fined and removed from the starting lineup for taunting Reggie Williams at the end of the Golden State game.  I don't have a problem with the fine, but the benching is tough for me to swallow.  DeMarcus has been improving noticeably on the court for the last few weeks, and benching him now is a confidence and morale killer to me.  Also, this nonsense about sending Cousins to the D-League?  That's just ridiculous.  The D-League is for development.  The only place Cousins will get any development is in the NBA, where he can learn to play against players at his talent level.

3.  Reports that Geoff Petrie and Paul Westphal are on the Hot Seat

It shouldn't be news that Westphal may be on the hot seat, as pretty much any coach that has started the season 5-22 would be.  But to fire Petrie? That'd be a huge move, and in the wrong direction (my opinion).  I can only hope that these rumors are indeed false, as they have been claimed to be.

4. The Abomination That Was the Warriors Game

I don't ever want to talk about this game ever again. Moving on.

In a five point loss, to have 25 turnovers is unacceptable, especially when the other team only has 12.  That's shooting yourself in the foot, and when you're only shooting 36% on the game, every possession matters.  The Kings haven't figured that out yet.

The Fourth Quarter marked our doom in each of the games this week.  We were outscored by more than the margin of victory in each Fourth Quarter this week (meaning we had the lead going into the final period), and each game had the other team making multiple runs where we didn't score a bucket.  Houston had two 7-0 runs over about 5 minutes, the Warriors had an 11-0 run in about 3 minutes, and the Bucks had a 12-0 run over 5 and a half minutes.  I don't understand how a team can keep losing when they have the game in their hands and all they have to do is just play the exact same way the final 12 minutes.

Beno is not a player without his faults.  He has many, including a tendency to drive into a crowd for no reason, and his poor defense (not for lack of effort though).  But he also is a usually consistent, above-average offensive player.  I almost feel bad for Beno, that he's stuck on this Kings team, because he'd be absolutely fantastic as the primary backup guard for a lot of playoff teams.  But instead, he's stuck here, and he's making the most of it.  I applaud him for that, and I hope that we can either trade him to a winner soon, or if he stays, that the wins eventually reward his effort.

Your point is invalid.

Caption: "What do you mean pass the ball? What do I look like, the freakin' Assist Fairy?!"

"No, it's just a coincidence that my jersey matches the time left on the shot clock when I initiate the offense." 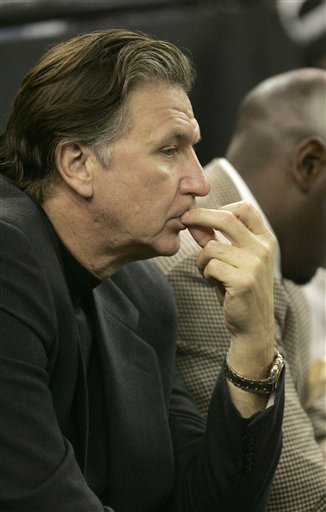 This week's caption contest winner will be receive the same job security Paul Westphal has.

If you were the Maloofs right now, what would you do in regards to this team? Would you stay the course, and keep chanting "In Petrie we Trust", or would you clean house?

v. Memphis 12/29 L (I can however predict another loss to the Grizzlies.)

@ Denver 1/1 W (We actually played Denver really well in each game last year, winning two of them and barely losing the other.  I think we're due. Right? Please give us a winning week. Pleeeeeeeease)

Nostradumbass Record for the Season 14 - 15 (I decided to go optimistic last week, and as such I got three straight wrong predictions. PFFFT)