The Case for Tyrus Thomas as a King

Share All sharing options for: The Case for Tyrus Thomas as a King

Let me start by telling you my conclusion.  My conclusion is that it is worth giving up our 2011 (NOT 2010) first rounder, lottery or not, for Tyrus Thomas.

How did I arrive at this conclusion? Well that is what we're going to explore today.

Tyrus Thomas, selected 4th in the 2006 NBA Draft by the Portland Trail Blazers, and then traded to the Chicago Bulls for LaMarcus Aldridge, was expected to be a building block for the Bulls future.  4 years and 3 coaches later (that sounds familiar), it was not meant to be.  At least not for the Bulls.

As stated earlier, the Bulls are looking to trade Tyrus Thomas for a first round pick.  The Kings are among teams interested, and unlike the other teams listed, can offer a better pick than any of them.  The 2011 first round pick.  Unprotected.

I doubt anyone who has perused this site or followed the Kings for more than a day would question that the Kings biggest need is a big man, one who can guard the paint, rebound, and score a bit.  Tyrus Thomas does all those things, a few of them better than any of the current Kings big men.

Why is Thomas so maligned in Chicago if he's such a good player then Aykis? Why aren't they trying to keep him?  Well Thomas hasn't been a model citizen in Chicago, and to be fair, he has had 3 coaches in his short career and none of them offered him consistency as has been well documented.  Here's a good quote from Kelly Dwyer, a lifelong Bulls fan, from his article on Thomas yesterday:

One doesn't lead to the other, but it doesn't help. Thomas was drafted as a project by the Bulls in 2006, but he was never treated like a project. Instead, he was treated like some four-year college starter that had been on CBS too many times to mention, and someone who was used to the grind. Thomas wasn't used to the grind. He was a basketball scrub until his late teens. He only had one year of slapping the backboards at LSU. He was ready, but he wasn't ready.

It's a messy situation in Chicago to say the least.

To make a point, here's what Thomas's Minutes per game looks like for this year for the 27 games he's played (he missed a big chunk because of a broken arm): 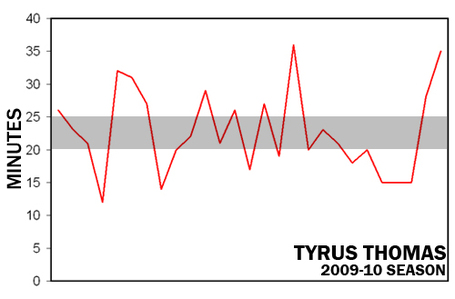 Notice the dip in minutes to start the season.  That's where he gets injured. He got MORE minutes in his first game back from injury than he did before he was injured (He scored 21, had 9 boards, and 2 blocks in that game btw). Not much consistency on that chart.  In one of those games, a 3 point loss to Philadelphia, he went 6-8 from the field and grabbed 6 boards, and he only got 15 minutes of game time.

The Kings also have a history of dealing with malcontents and have been known as a place where players have been able to thrive after leaving bad situations (Webber, Bonzi, and Artest come to mind).

Let's take a look at the stats now.  Tyrus Thomas is 1 month younger than the Kings very own Jason Thompson, despite being in his 4th year in the league.  He would be a better defensive rebounder than any of the Kings bigs that play meaningful minutes (Sean May is the Kings leading defensive rebounder).  He would be by far the best interior defender and shot blocker the Kings have had since Keon Clark.  He's almost as good a shot blocker as another guy the Kings have reportedly had interest in, Samuel Dalembert, and his block rate would be good for 8th in the league.

On offense, Thomas is knocked for his much maligned jump shot, but it is improving, and besides, he attempts most of his shots up close, and he makes a very high percentage of them.

The Kings weren't going to be players in the 2010 offseason anyway, so acquiring Thomas would be a solid move for our future in my opinion.  Players like Kirilenko, Dalembert, Murphy, who might be able to help a little bit now (and are worth a lot of money I might add), might be able to add a few wins for a year or so, but what's that do other than hurt our lottery position now? It's not like we're planning on keeping those guys for the future are we?  Thomas is a guy we can acquire with our eyes set on the future.  At some point, acquiring/developing lottery picks will not help the team as much as it is now.  This year the Kings will have another high-mid lottery pick, making it our 4th straight year in the lottery.  Hopefully, we're going to keep on improving, and while we probably won't make the playoffs next year knowing how hard it is in the West, we shouldn't be too far behind, especially if you factor in the improved interior defense a guy like Thomas can bring, improvement in Tyreke and Kevin working together, improvement in our other young guys, not to mention our lottery pick.  So in 2011, when we're gearing up for a possible playoff run, does another lottery pick help this team as much as a Tyrus Thomas not yet in his prime?  A pick who for all we know could take 3-4 years to develop?

Acquiring Thomas is help for the now, and help for the future in my opinion. We don't necessarily have to trade for him, and we don't necessarily have to give up that 2011 first rounder (as Ziller explains over at FanHouse, the Bulls are trying to get out Thomas's potential cap hold, so getting anything for him would be a gain) and we could wait until the offseason and see if we can pick him up as an FA, but if the Bulls trade him, the team that gets him likely wants to keep him, and they have him under Restricted status.  I think giving up that 2011 pick to secure Thomas is a risk I'd be willing to take.