Share All sharing options for: The Good, the Bad, and the Ugly Week 16 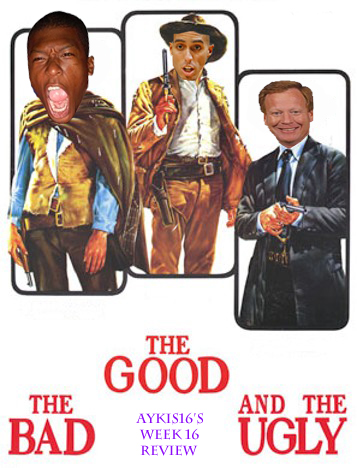 Was anyone else hoping Derozan won this crappy dunk contest just so we wouldn't ever have to see Nate again? I know I was.

This was probably the best week we've had of the new year. Two wins in a week and Tyreke wins the MVP of the Rookie-Sophomore game. BTE you were right. I need to be optimistic more often.

Each and every time this kid plays, or speaks, I count my lucky stars that he's a Sacramento King. Not only is this 20 year old kid probably the best talent to ever come through Sacramento (Chris Webber included), but he just gets it. He knows when to put a team on his back to bring them back into the game and win it (New York, Detroit). He knows what to do off the court, as shown by his desire to share his Rookie-Sophomore MVP honors with the also deserving DeJuan Blair. And he knows what to say off the court, unlike Brandon Jennings. Take this quote from an article about him: "I mean, it's an honor to be mentioned as possible Rookie of the Year, but the main thing is to get the Sacramento Kings as many wins as possible.". Amazing. Be thankful Sacramento. Be very thankful.

Winning makes everything better. I don't care if its against two bad teams like New York or Detroit. The fact of the matter is that the Kings went in there with one of the worst records on the road in the league, and came out victorious. We even played well against the Raptors for 3 quarters.

Donté had a very nice week. His shot looked extremely smooth, hitting 8 of 10 3 pointers this week, and his defense was as usual, great. We saw some looks with him at the Power Forward, and against the smaller teams like Toronto and New York, it seems to work out great. It's definitely something to try for the rest of the year. His rebounding numbers seem to go up when he plays PF as well. He really has to work on his Free throw shooting stroke though. His 3P% and FT% from last year have alternated. Last year he was an 85% FT shooter. This year? 60.1%. Not good for a guy who shoots so well from the floor, and has the potential to get to the line quite a bit.

Omri had a good week, especially in Madison Square Garden, where he was posterizing Gallo and lighting it up from the floor when he wasn't shooting from 3 (1-8). Omri played well in the Rookie Challenge and H.O.R.S.E, where he showed the most personality. You have to love the guy's effort and composure on the court. He's also a fierce rebounder for a Small Forward. He and Ersan Ilaysova are two guys who I think could have similar careers and be Lamar Odom type players (although I don't know if either of them have the wingspan to be as good of a defender as Lamar. They'll be better shooters though).

Beno had two good games this week, and an inexplicable 5 minutes in New York where he wasn't playing bad, yet didn't see much game time after he was pulled before the midway point of the 1st quarter. Against Toronto he played well in his limited time, although he had trouble on defense, and against New York, where he had trouble guarding against Stuckey's greater strength and size, he simply dominated on offense, hitting on all but 2 of his shots, totaling 6 assists to go with 3 steals. Beno has shown to me this year that he isn't as big of a necessity to move his contract. His production this year is worth his contract, and he makes a solid back up to Tyreke Evans. I would venture that Beno is better than a few starting points in this league, and is one of the better back ups. If anything we could perhaps use Sergio as a sweetener in deals at the deadline.

Yep. Two straight weeks. And you know what? Its all because of one game. He was alright against Toronto, and downright atrocious in New York, but against Detroit? He was unstoppable. He came into the game and hit his first 5 shots, and along with Beno, torched the Detroit defense and kept the Kings in the game so Kevin and Tyreke could finish them off in the 2nd half. If it weren't for Andres and Beno in this game, we probably would have lost.

Is it just me or does it seem like Sean May never misses any of his jump shots now? How pretty is his stroke? He can have a decent career I think. He just needs to find the right team. I wish him the best for the future. It's clear he's put the effort in and that he belongs in this league.

Brockman had 5 offensive rebounds against New York. That's 5 extra possesions. Kings won by 4. Those rebounds helped win us the game. Keep up the good work Nessie, although I do think that sightings will be rarer from now on.

We didn't lose the rebounding battle in any game this week. We beat Toronto at it, we shellacked New York at it, and we tied Detroit. Not bad.

Spencer didn't have a horrible week. His end of game defense and rebounding against Detroit helped win us the game, and he was pretty solid against Toronto. He didn't see any meaningful time against New York either. But I'm putting him here for not showing the consistency that he had been showing in the past few weeks. His jumper wasn't falling, he was losing the ball when he put it on the floor. He needs to be consistent to get consistent minutes.

You know what? JT isn't himself. And yet he still put up seemingly solid numbers off the bench against New York and Toronto. But it just seems to me like he's not playing his best still, and if you're watching, I think you can get what I'm saying. He's still playing too much with his hands on defense, still overreacting to the fouls, still letting the frustration get to him. I hope he comes out strong after this break. He really needed it.

Nothing memorable from either of them this week. And Sergio managed to have 3 turnovers in only 7 minutes against New York. As well as two assists. The guy has no conscience when it comes to making the crazy pass.

This was a game we could have won and should have won going into the 4th quarter. But once again, our offense faltered, our defense faltered even more, and Toronto went on to win by 11. The Kings desperately need a decent post defender, whether it comes in the draft, trade or free agency. I don't care which, but it has to be done.

What a snooze fest. That is all.

It looks like we're going to have a lockout as neither side can seem to agree on anything. It's going to be an ugly war of attrition and the players have already brought the Brock Ness Monster to the meetings. This thing is far from over.

Do these numbers look familiar to you? Other than the 3P%, it looks like Kevin's back. He and Tyreke have finally seemed to gel a little better on the offense and Kevin once again knows he's out there to score, and act as the complement to Tyreke that he needs. As Ziller said, teams are finally having to make the tough decision over who to focus on, Tyreke or Kevin. Against New York, Tyreke took over the 4th quarter, leading them to concentrate on him in overtime, where Kevin punished them with 9 straight points. The one thing that still isn't very Kevin like is his 3 point shooting. I'm not too worried about it though, because he's a shooter, and shooter's don't just suddenly become bad. He'll find his rhythm once again (like he is on his two pointers) and those threes will start dropping. When they do, watch out.

In regards to Jesus

"I know it’s you running me over, Hedo! The mask is clear, dumbass." 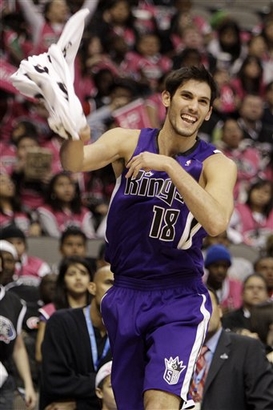 I'm going to say it right now. DeMarcus Cousins has the chance to be a Superstar. He also has a chance to be one of the worst players in the league. It's about 50/50 at this point. He's been dominating college ball in Kentucky with 2 other lottery projected teammates, Patrick Patterson (profiled last week) and John Wall. He has the 3rd highest PER (38.5) in college basketball since PER has been recorded, trailing Michael Beasley and DeJuan Blair, and slightly ahead of Andrew Bogut. The guy is an absolute monster in the low post, definitely something the Kings have been lacking. He also has a decent jump shot as well, but he tends to take too many of those when he could take it inside for the more efficient shot. His rebounding is also great, and his shotblocking skills are adequate. He's not a very fast moving player, and that might expose him a lot more on defense in the NBA, but he has all the physical tools (great wingspan and instincts) to be a force on that end of the court as well. By far the biggest downside to Cousins is his perceived lack of effort sometimes, and the fact that he is somewhat of a black hole. Even with his incredible production, it doesn't seem like he's trying all that hard. Maybe its the competition, but its more likely that he just doesn't care. He hardly ever passes the ball once he gets it, as he's constantly thinking about scoring. Cousins has a lot of growing up to do. The team that drafts him and all his skills will definitely need to take that into consideration. Will he be Shaq? Or Derrick Coleman? That's up to him.

v. Boston 2/16 L (Boston has been having some trouble, but they're still a much better team than Sacramento. It will be interesting to see how Tyreke does against Rondo, one of, if not the best, defensive PG in the league).

@ Golden State 2/17 W (Westphal is not going to let the guys forget that they were up 18 in the 3rd last time they visited Oakland.)

@ Clippers 2/20 W (Because we always beat the Clippers, no matter how crappy we are or how good they are. Expect Beno to be on fire in this game.)

Nostradumbass Record for the year 30-22 (similar to the Thunder, Spurs, Suns and Raptors records)