What Happened to Jason Thompson, and Why I'm Not Worried

Share All sharing options for: What Happened to Jason Thompson, and Why I'm Not Worried

Outside of an unnamed shooting guard, Jason Thompson has perhaps been the source of greatest consternation among Kings fans this season.

Last spring, Thompson was seen as a vital cog in the Machine of Tomorrow for the Kings -- the power forward that'd protect Spencer Hawes down low, that'd help give Sacramento its long sought after mean streak, that'd be a rock of consistency for the next decade. And Thompson started this season brilliantly, among the best players under the age of 23 anywhere in the league, and a nightly savior in the paint. At one point, ESPN rated Thompson the second best performer from the Class of 2008, behind only Brook Lopez.

Things changed, somewhere around late December or early January. Thompson began slipping into early foul trouble, it seemed. He missed more bunnies than ever. His 18-foot jumper abandoned him. His rebounding slipped, his frustration grew, and his role as the frontcourt's top minute-soaker shrunk. And at the same time -- perhaps related, perhaps a cause, perhaps an effect -- the team went from Surprise of the Year to third-worst in the West. 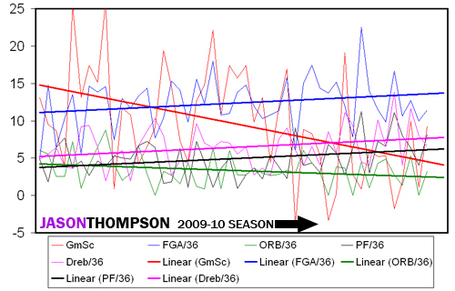 GameScore (denoted in red on the graph) is a Hollinger stat based on PER. You'll notice that while his other per-36 numbers haven't changed dramatically, his GameScore has. To explain that, a second graph: 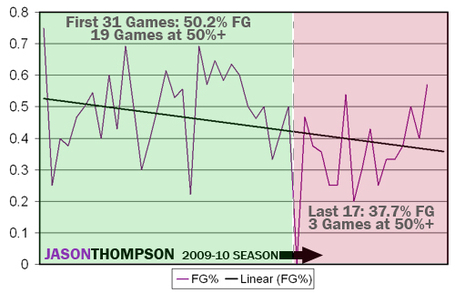 J.T.'s field goal percentage has seriously trailed off as the season has wore on. Over the season's first 31 games, Shock shot 50.2 percent from the field. In 19 of those games, he shot 50 percent or better.

In the last 17 games (not including last week's back-to-back in New York and Detroit; sorry, compiled the stats last week)? Just 37.7 percent shooting for Thompson, with only three games at or above 50 percent from the field.

Is it the cause of Sacramento's notable slide, which began right around the time J.T. began struggling from the field? Well, no. Many things caused the Kings slide. Thompson's struggles may have contributed; to what extent, I have no idea. We can, though, look at each prominent King's won-loss field goal percentage splits, to see if perhaps the team's fortunes and J.T.'s shooting has an inordinate strong correlation.

You'll notice that the fortunes of the team are more closely aligned with the shooting performance (good and bad) of players other than Thompson: Kevin Martin, Beno Udrih, Spencer Hawes and Donte Greene. J.T., like those four, does shoot quite a bit better in wins as opposed to losses. But the correlation (binary, admittedly) is stronger for the others.

(Of course, it's worth mentioning the complex relationships here. If, say, Evans shoots poorly in a first half, he'll continue to shoot in the second. If Greene shoots poorly, he's likely to make way for Casspi, Nocioni or Ime Udoka. Thompson is a bit in between: no other big man but Hawes is likely to take many shots either way. So if Thompson misses four straight to open a game, he's still likely to take four more. There's also the matter of offensive rebounds; Thompson and Jon Brockman have better opportunities than anyone else to get a non-playcall shot off due to the offensive glass.)

(Note #2: I'd ignore Martin's split for now, if only because he's been a part of so few wins -- four -- that the data is extremely noisy. There's certainly some cause-and-effect somewhere in there; in other words, the team's fortunes and Martin's shooting were clearly related in several games, most notably the narrow Charlotte defeats. But the split seen above almost assuredly overstates the correlation due to sample sizing.)

So where does this leave us? Thompson is going to get minutes, he must. He's the team's best rebounder outside of Brockman, and a vital player stylistically for the offense. Paul Westphal has (rightfully) shown a degree of confidence in J.T. exceeding that of the team's other young big man (Hawes). Thompson will always get minutes, and due to his role he'll always get shots. Making them obviously helps the team. And no one would dream of arguing Thompson is trying to miss his attempts. Two-point field goal percentage is among the most volatile statistics, night-to-night and week-to-week and season-to-season, in the game. Let's hope it picks back up to near 50 percent for Thompson, because that helps the team stand a better chance of winning, and Thompson of ensuring his place among the brightest of Sacramento's future.

If it doesn't, I hope J.T. will avoid frustration and rebound and defend and pass and set screens like the demon we know he is.