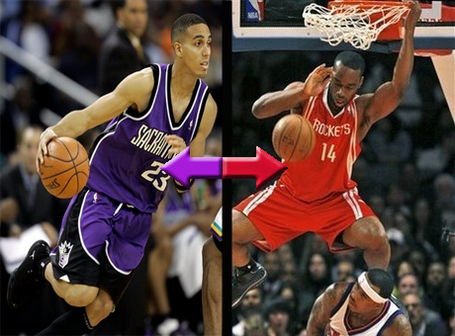 Updates after the Jump, but main pieces as of now are Tracy McGrady, Carl Landry, Joey Dorsey for Kevin Martin, Kenny Thomas, Hilton Armstrong and Sergio Rodriguez.  Updates will stay on this page and continue to be updated as they come in, but continued discussion will take place in this thread.

More updates to come but Stein reporting (and Amick confirms) that Kevin Martin is heading to Houston.

Woj Twitter: "Sacramento management told Paul Westphal to pull Kevin Martin in the second half of loss to Warriors, once agreement was within reach."

Amick's Twitter: "Martin has confirmed to me that he is heading to Houston barring any late snags."

Woj's Twitter: "Two league sources tell Y! Sports that Kings are unsure whether they will keep T-Mac, or move him onto Knicks in a deal before deadline."

Sam Amick Blog Post up: "It's a sad day for me in sense that Sac was first team that took chance for me late in first round of draft," Martin said from the team bus. "They showed so much loyalty to me through out the years. They gave me the big contract to show that you loved me...(But) I just think it was time for us to go in a different direction. I was the young guy before, and now I'm the oldest starter. I think it's good."

Post 2: "Sergio Rodriguez and Kenny Thomas have no idea where they're going. Just talked to both."

Marc Stein's Twitter (Twitter is a lifesaver): "Just spoke to another source close to the situation who said of T-Mac winding up with Knicks on Thursday: "I think it will happen.""

Sam Amick's Twitter on T-mac: "Was told of McGrady going to New York: "They'll deal with that component in the morning.""