Is the Kings Rotation Abnormally Inconsistent?

Share All sharing options for: Is the Kings Rotation Abnormally Inconsistent?

I want to go even more basic, more atomic. The question: is Westphal's rotation inconsistent by current NBA standards? If so, how inconsistent compared to the norm?

Using data from BasketballValue.com, I looked at the number of minutes each team's three most frequently used five-man units have played together so far this season. This seems like a good proxy for rotation consistency without slicing too thinly -- Atlanta, for example, has a very consistent rotation, but has two or three heavily used line-ups.

That said, compared to the league as a whole and to fellow "young, rebuilding teams," how inconsistent has Westphal's rotation been? 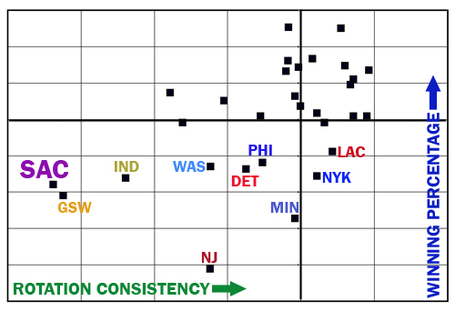 The next lowest total is Indiana, with 326 minutes between its three most heavily used line-ups.

The most heavily used line-up in the league this season has been Memphis's starting five (Mike Conley, O.J. Mayo, Rudy Gay, Zach Randolph and Marc Gasol), with 1,166 minutes as a unit. You may remember that the Grizzlies are one of the very few teams in the league younger than the Kings. The Memphis starting five has only been changed when Gay and Conley each missed two games due to injury. The Grizzlies, with this line-up, began the season 1-8. Coach Lionel Hollins stuck with the unit, and the team is now 28-27 and within striking distance of its first playoff berth since 2006. The Memphis starting five outscore opponents by more than seven points per 100 possessions.

Again, I'm not saying Westphal's erratic rotation either hurts the team or is a necessary component of this team's status. I'm just saying it is indeed erractic by NBA standards.