Share All sharing options for: The Good, the Bad, and the Ugly Week 15 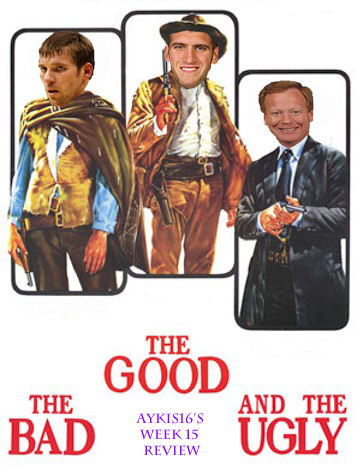 Spence, you've been playing well ever since my Article asking if you've regressed.  Perhaps I should do this for JT and Kevin as well.

Another 0-3 week, but this time there is reason for encouragement.  The Kings played 3 good to great teams and had the chances to beat 2 of them.  That's better than being embarrassed in all of them, which had sadly started to become a trend.

1. Effort seems to be back

The Kings seem to be once again playing with the determination that they were with at the beginning of the year.  This was especially evident to me during the Denver and San Antonio games, both games the Kings could have won, and the eventual loss could definitely not be blamed on effort.  I'm just glad we're seeing it come back again, and against some very good teams too.  I think the team is tired and the All-Star break will be a good chance for them to get some rest.  I also can't wait until the deadline is over so the team can put its full focus on the games at hand.

Donté scored a career high 31 points against the Suns.  Is this reason to be excited? Not for the reason you'd think.  The reason I get a little excited is because he scored 31 points, and if you watched the game, he really didn't have all that great of a game.  Donté could become something special.  He's got amazing natural gifts, athleticism, and range on his shot, and his defense has become great for a 2nd year player who was anything but special on that end last year.

Sergio was quite capable as the primary backup point guard this week, and he showed remarkable skill at getting to the rim and finishing, mainly because of his quickness.  He's a magician with the ball, and if we trade Beno at the deadline, I'll be glad that Sergio is here to take his place.  But if we keep Beno, I think Sergio could be a pretty good trade chip.  Guy has skill, there is no question of that.

Tyreke has been distributing the ball extremely well as of late, and thats what I want to focus on this week.  He's making an art form out of the drive and kick, and while it doesn't always lead to points, most of his passes are to wide open shooters.  There's no doubt in my mind that Tyreke will have the Points and Assists requirements for the 20/5/5 crew.  Now if only he could pick up his rebounding a little bit.  But that's just nit picking.  Kid's special.  I'm glad he's in a Sacramento uniform.

Omri had a fairly solid week after some slumping, and he finds ways to contribute even if he doesn't score.  He rebounds extremely well for a G/F, but he does need to work on his decision making, which is probably his biggest weakness.  Omri is definitely NaPG.  I have faith he'll get better in this area.  He is a rookie after all.  Its nice to see him shooting the ball decently again.

I probably delayed a week Noc's return to the Good, but he definitely earned it this week.  While his numbers for the week aren't glamorous, they aren't bad, and they definitely aren't ugly.  And you have to give Noc this, he always plays hard, and plays scrappy defense.  He was an especially big boon in the Denver game.

Give May credit.  Guy plays his ass off and his jumper looks silky smooth.  In fact, I wish Kevin Martin had his jumper right about now.  Ime and Brockman also go in this category, for coming off the bench and playing hard.  And Hilton Armstrong gets in because of his sneaky Ninja move at the end of the Phoenix game, where he went to shake a hand but then went for the ball instead.  You're not part of the Kings future Hilton, but I'll always remember you for that.

One of those games (Denver) he continued his horrid slump.  The other two were a funeral.  Condolences to JT, and he looked pretty good against Toronto, so perhaps all he needed was a slight rest.  We'll see what happens after the All-Star break.  If his slump continues, then I think we start to get a little worried.

Please spend the All-Star Break with Coachie and/or David Thorpe and get your shot back.

I can't wait until the deadline is over.  What happens, happens.  Until then, the team needs to tune out the voices and just keep playing.

I'm going to chalk up Beno's recent poor play to his Plantar Fasciitis.  I have known people who have had it, and from what I've heard, it is very painful.  Get better soon Beno!

Dejuan Blair. Tim Duncan. Chris Andersen. Kenyon Martin. Robin Lopez. Amar'e Stoudemire.  All of them had great offensive performances against the Kings this week.  I love Spencer, JT, and Donté, but none of them are good post defenders.  This needs to be rectified before next year (doesn't necessarily mean at the trade deadline).

Losing sucks.  There's no getting around it.  You can look at the silver linings all you want, but at the end of the day, you want to see your team with more points than the other team.  But don't lose hope Kings fans.  Things could be so much worse.  Imagine if you were a Nets fan.  You thought last year was bad?

Sam Amick Rules.  Napear drools.  That's all I have to say about that.

I was entrusted to write the Game Preview for the Raptors game. In fact I volunteered for the job.  Where is the preview you might ask?  Yeah...

Spencer had one bad game against Phoenix this week (who he never plays well against), so that's whats dragging his per game stats for the week down, but even with that bad performance, Spencer had a good week.  He was arguably our best player in our loss to Denver, and was very solid going against one of the All-Time greats and his idol, Tim Duncan.  Spencer is consistently being very solid lately, and he has come up big in crunch time a lot this year.  His pass to Beno took us into overtime and the eventual win v. Memphis earlier this year, he hit several clutch shots against the Lakers to start the year in a game the Kings should have won, and he had a huge tip in during the Denver game to send us to Overtime and hit a big 3 during overtime, where we unfortunately ended up losing.  Spencer to me is the more valuable of our two young big men and the one with the most potential.  It's nice to see that he's finally begun to show some consistency. Keep it up for the rest of the year big guy.

If you're going to be in the lottery, you may as well be near the top.

It just can’t be said enough: We are rebuilding. Rome was neither built, nor rebuilt in a day.

I’d also like to humbly suggest that, no matter how well we draft this year, we are going to be in the lottery again next year, although I would expect to be at the lower end of it. Getting a rental like Stoudamire who could conceivably get us to 30 wins this season just isn’t worth the cost of derailing the long-term rebuilding plan.

2011-2012? That’s going to be an exciting season, and barring something completely bizarre, it will be a fun climb from there. And maybe in the interim, we even manage to shed some of the bad deals (Nocioni/Garcia/Beno), and make a decent splash in the FA market.

Until Halloween 2011, the only thing that truly matters is making sure the entertainment complex proposal keeps moving forward. The personnel of the team itself is in good hands.

Ime: Reke, check them out. What the heck are they doing?
Tyreke: Shakes head. "White people".

Beno Udrih gets snagged in the invisible tether that Paul Westphal has attached to Spencer Hawes.

This week's picture (FROM THE FUTURE!): 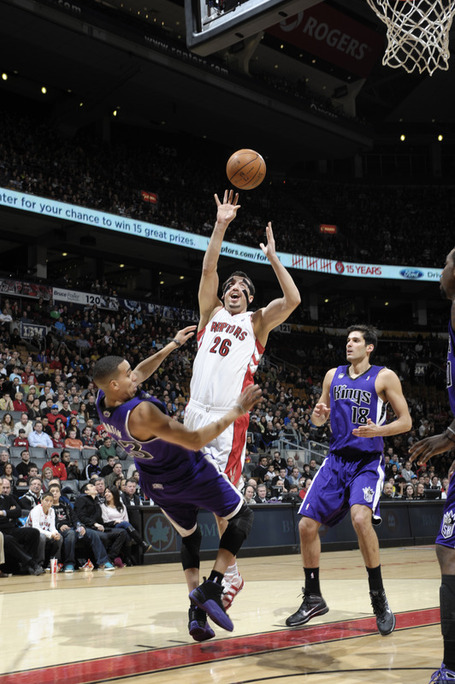 Lottery Projection and Profile of the week:

Since we've entered the 2nd half of the season and are clearly headed for the lottery, I thought it'd be about time to add some draft analysis.  I'll be profiling a different college player each week, as well as showing the possible range for where the Kings might end up, pre-ping pong balls of course.

Patterson has made noticeable improvements in his game since his Freshman year.  This year with new Freshman Demarcus Cousins and John Wall coming to Kentucky, Patterson hasn't had to be the focal point of the offense, but is still a decent offensive weapon.  He's got great athleticism, and is a VERY efficient scorer, hitting almost 60% of his shots over his college career.  His basketball IQ is great and you can trust him to make good decisions with the basketball and to know his role.   He's also, by all accounts, got great character.

As much as I think Patterson could be a great player, his deficiencies are exactly in the areas the Kings lack: Rebounding and Defense.  Despite his great wingspan, he's not a good shotblocker, and he's also not a very good defender.  Draft Express labels his best case as Carl Landry, and his worst case as Kris Humphries.  Not a bad comparison.  Wherever Patterson goes, I'll be rooting for him.

And Nostradumbass Prediction for next week:

@ Toronto 2/7 L (Kings start off poorly, play some great stretches of basketball during the 2nd and 3rd quarters, but just can't stop the Raptors in the 4th or score for that matter.  Raptors win by, oh lets just say 11)

Nostradumbass Record for the Year: 27-22