Share All sharing options for: The Good, the Bad, and the Ugly: Week 24 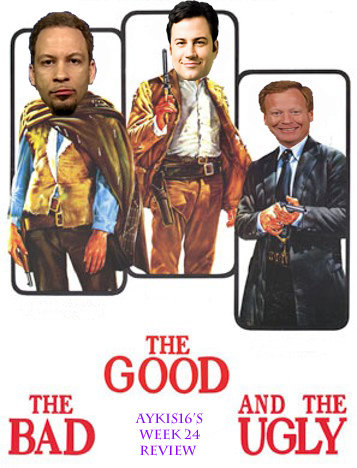 People like Chris Broussard are the reason that there's even a "discussion" on who the RoY is.

The season is winding down and there will only be one more Good, Bad and Ugly until next season after this week. And it wasn't a bad week all told, even going 1-2.

2. My experience on the X-Over and the ensuing Caption Contest

If you haven't read already, the X-Over was a blast, and section214 started an incredibly funny caption contest as well. This is as good a time as any to thank you guys for being so awesome. Without you, this experience would have likely never happened for me.

It's amazing how similar Landry's stat lines are to Kevin Martin's when you look at them. Take the Mavericks game for example: 30 points on 10-16 from the field and 10-12 from the line. This guy is incredibly efficient. He still has some work to do with rebounding, and although he'll likely never be a good rebounder, he can at least learn to not be a poor one. But his offense is All-Star caliber.

Omri was definitely fatigued when Paul started cutting his minutes, but it seems like he's back to full-strength now. His shots are falling and he's rebounding well once again. Omri has a lot of fire in him and I hope it convinces him to work on his conditioning this coming summer so he can contribute like he has for a full season. He can be special.

I really like JT at the Center spot. On the offensive end of the floor, he has enough range with his mid-range jumper to draw Centers out, and he's also quicker than most Centers. Defensively is where he has problems, but he has some upside on this end of the court and he has shown some improvement here throughout the season. I'm glad of the work JT has put in this year and I think we're likely to see a much better JT next year.

Beno didn't put up the gaudy stat lines this week like he had been the last few weeks, but he's still been effective. He shot pretty effectively (except the Spurs game, but he got to the line 9 times against them), dished and took care of the ball well (7:1 A:TO), and he's even good for a few rebounds a game. On defense, Beno just isn't big enough to guard some of those guys, but he puts the effort in. I was watching the Phoenix-Spurs game on Tuesday, and Goran Dragic, Beno's countryman, reminds me a lot of what Beno could be like if he was a little taller and more athletic. Beno and Goran are giving Slovenian's a good name this year (Speak not of that abomination that plays for the [Redacted[)

It seemed odd to me how Donté has been having his minutes limited as of late. He doesn't seem as if he's fatigued, and he's been pretty efficient on offense when he's been in. It doesn't seem like its anything he's doing thats causing him to not play more than 20 minutes a game. Other than Spencer, Donté has had his minutes yanked around with more than anyone on this team. It's a testament to him that he's able to take it in stride and continue to build on his game. Other than Tyreke, I think this is the guy you look at on this team to have a very special career.

8. The Effort this team has shown all season

The one biggest difference between this years team and last years is the effort that's being given night in and night out. Watching the Clippers game, the Clippers just seemed lifeless and it reminded me of how our team looked last year. But this team keeps on fighting. Once that fight coincides with increased experience and talent, look out league.

Other than the Spurs game, the Kings did a great job on the glass, annihilating the Clips and out-battling the Mavs. Its funny that we knock on our guys for rebounding and yet this team has been so much improved at rebounding this year at 9th in the league. Westphal has really done a great job with what he had this year. I cannot wait to see what he does in year 2.

It's painful to watch when Cisco goes for a loose ball and afterwards is holding his wrist. I really hope he doesn't re-injure it in these last few games and I think thats why he's been seeing limited minutes. This guy is full of heart and this was supposed to be his year to shine. I hope he can come back next year and do next year the same thing that Beno has done this year and win our minds back. Because he has our hearts. Viva el Flaco!

I was sort of confused by Noc this week. He wasn't really seeming to make much of an impact on the court this week, it was just like he was another body on the court that sort of just played. I'm guessing he's been starting as of late because Westphal thinks his defense is better than Donté or Omri's right now, but I'm not really seeing it. Jefferson torched us as usual, and Butler (Caron, not Rasual)had a good game as well. It will be interesting to see how or even if they try to address Noc this off-season.

You know, I use to only dislike Peaches for his radio show, and thought he was a pretty good play-by-play guy, but now I just dislike him in general. I mean, I love Tyreke too, but there are other guys on his team as well. I can't wait till the 20-5-5 is over so Grant can stop mentioning how many points Tyreke needs and get back to just calling the game. And using the Play-By-Play spot to make continual assertions of how great Tyreke Evans is is bad form. We know how great he is Grant, we have eyes.

This man is evil incarnate. It's a good thing we have his counterbalance: eduardo_m7.

3. Eddie Jordan to be let go as Sixers coach at end of the season

I know its technically not Kings related, but Jordan was almost the coach here this year and its interesting how badly he has done this year compared to how well Westphal has done improving this team. We got lucky in a lot of the ways we got "screwed" last year. 4th pick: Tyreke. No Rambis, no Jordan: Westphal. What a difference a year makes.

It's official: Mouthguards be damned! Tyreke came back with a vengeance this week, scoring at a high rate and doing it at a good percentage too. He's also continuing to rebound like a mad man and dish the ball to his teammates at a decent rate. His defense has also been stepped up as of late as he did a pretty good job of limiting his opponents. Tyreke only needs 24 points between the next two games to get 20/5/5 so that is pretty much guaranteed at this point, and it will be really nice to see if he can get it at home against Houston on Fan Appreciation Night in Kevin Martin's return. I unfortunately cannot attend that game, but I recommend going if you can. Last Kings game you'll be able to go to this season, so many cool things going on (20/5/5, Kevin's return), and you'll probably walk away with something free from the Maloofs as well.

But be warned. I just received an anonymous STR e-mail saying, "You will never get comment of the week." Couldn’t have anything to do with calling Aykis name. Right?

Rudy: And, that, Kings, is how Spaniards remove testicular tumors.

Rudy shows off his new "Reke For ROY" tattoo to the Kings. But that’s not what has the Kings shocked.

Meanwhile, Sean May embarrasses himself by saying, "Wow. That’s a mouthful." 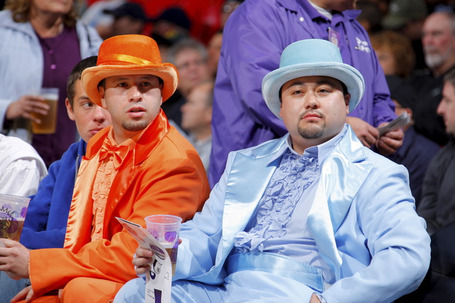 Do not be surprised if you see the Kings work out Ed Davis quite a bit. He's only 6'9 but he's got tremendous wingspan and good defensive skills (2.7 blocks a game in 27 minutes), as well as being a pretty good rebounder as well (9.2 in the same amount of time). The biggest knocks on him is on the offensive end. He has no ball handling skills whatsoever and his scoring is limited to around the basket. He only took 4 jumpers all season according to DX, and its mainly because he sucks at them. At least he knows his limitations right? In the post his lack of strength or weight lets him get bothered by more physical and powerful defenders, and he hardly uses his right hand (he's a lefty), something he'll definitely need to work on. Davis is essentially the poor man's Derrick Favors, and probably a bit better on the defensive end right now. But Favors has considerable upside on the offensive end of the court as well as his already considerable upside on the offensive end, while Davis will likely remain a sub-par offensive player for most of his career. It's not to say he can't be a valuable player, or learn to score, but his value won't be in his offense. Maybe that's what the Kings need, who knows.

v. Houston 4/12 W (This will be a very fun and close game. I'm giving the edge to the Kings. ARCO should be rocking to welcome back Kevin)

@ Lakers 4/8 W (No Kobe, no worries, although Lakers might bring him back so as to get a little momentum going. They're only 5-5 in their last ten, not a good way to enter the playoffs. So lets kick them while they're down!)