Share All sharing options for: The Good, the Bad, and the Ugly: Week 23 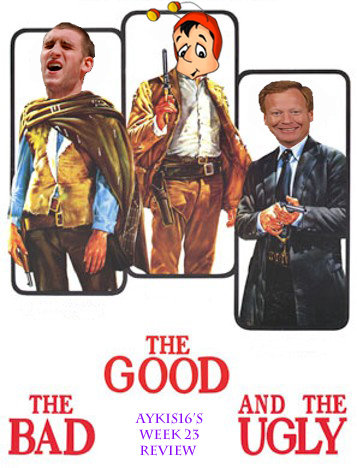 El Chapulin Colorado would've been proud of you this week Noc. Well done.

I hope you all had a better Easter than the Kings had a week, because it was another bad one. Ah well, seasons almost over right?

Tyreke returned to the Kings from his concussion on Tuesday, which is a nice sign from the youngster, and in those first two games back, he kept up right where he left off, with two more almost triple-doubles. It wasn't until Portland that Tyreke had a bad game, one of the few he's had this season. His 20-5-5 status remains clouded now, but there have been several points this season where it did for both rebounds and assists, and both times Tyreke came back and destroyed those statistics. Now all thats left is points. I have faith in him to do it, but he doesn't need to do it to affirm my belief that he is the best young player this Sacramento franchise has ever had. But it'd be nice. The icing on the cake if you will.

Noc came back in fine form this past week, playing his usual scrappy defense and finally finding the range on his long ball (11-17 this week). He was a big reason why we were able to keep it close with the Cavs for a while, but unfortunately the team couldn't win a game despite Noc's best efforts this week.

Omri only played twice this week, against Cleveland and Portland, but in both games he seemingly regained his confidence in himself and was able to provide solid offense and rebounding. The Kings will have an interesting decision to make in regards to both Omri and Donté next year on who to start and who to bring off the bench. I personally think it should be Omri coming off the bench as the energetic sparkplug, but let's see what transpires this offseason first.

Other than his poor performance in the Minnesota game, Beno has continued to put up great numbers and play his heart out. On defense, the effort is there but some guys are just too strong and quick for him to handle (see Miller, Andre and Flynn, Jonny). It remains to be seen if Beno can keep this type of production up consistently, but if he can, he can be a part of this teams future.

This guy isn't very flashy, doesn't tend to have very many dominant nights, but he just quietly goes out there and gets around 18 and 7 every night. Sometimes more, sometimes less, but never very different. He still has plenty of work to do on his game, and if he can become a competent rebounder, he can be a very special player.

1. Spencer Hawes done for the season

Not a good end to a semi-disappointing season for Spencer. I say semi-disappointing because ever since Rolegate he has been playing well, and he has had his dominant moments this season when he has shown exactly what he's been capable of (Memphis, Los Angeles, etc.) I am definitely with Ziller that it would be foolish to extend him this summer (unless its for a ridiculously reasonable contract), but I also think that it would be foolish to talk of trading him this summer. I don't think you can give up on players that have as much talent as Spencer and are as young. Most big men take awhile to develop. Spencer has finished his 3rd season, but he'll only be 22 next year. 7-footers with his skillsets don't just grow on trees.

2. Dominic McGuire done for the season

This is a shame because Dominic had been showing some nice flashes. I wouldn't be surprised to see the Kings retain him next year. He is a very good defensive player and like Tyreke, merely needs a serviceable shot. He definitely belongs in the league.

3. We released the Kraken

Joey Dorsey was waived by the Kings and subsequently signed with the Raptors. He is a talent in this league, and he was definitely not waived because of his basketball skill. Still, its a bit disappointing that his attitude and demeanor got in the way of his potential. I hope this isn't going to be a career trend with him as it is with so many young players. Best of luck Joey.

12 - 20 against Portland and 8 - 15 against Minnesota. We cannot keep shooting ourselves in the foot with Free throws. We're 29th in the league in FT%. There is some irony to my argument though. The team that is 30th in FT% is the Cleveland Cavaliers, the team with the most wins in the NBA.

1. Getting beat up by the T-Wolves

The Timberwolves were too big and too strong for us, and not having bodies like Spencer and Sean May really hurt the Kings. Each of the Wolves major big men (Jefferson, Love, Milicic) had double doubles, while the most rebounds any one King had was 7 (JT, Carl and Tyreke). The Kings also couldn't get anything going inside either, as 10 of their shots were blocked. It was just not a pretty game against an inferior team. It definitely was a game that showcased our weaknesses and what we need to improve on for next year.

Most disappointing was another winless week for the Kings, especially when you take into consideration the strength of our remaining schedule. There is the fairly good possibility the Kings don't win another game this year. That would not be the way I want this season to end. But these are the new scrappy Baby Royals. I won't discount them from any game.

Here's Donté's point and minute per game this week: 3 pts in 27 minutes, 5 points in 18 minutes, 21 points in 30 minutes, and 2 points in 13 minutes. Consistency needs to be the theme for Donté next year, just as "major improvement" was the theme this year.

Jason was back in his early season form this week, scoring very efficiently, rebounding well (except for a bad rebounding game against Portland), playing solid defense, and best of all, not fouling. He was able to average 38 MPG with only 3.3 fouls per game, well below his average of 4.5 FP36. If this kind of improvement can continue next year, JT can be a very valuable player to this team in the long run. He's still got plenty of potential, and I think its a nice sign that JT has been playing so effectively as of late at the Center position. He's the perfect size to be able to play both PF and C effectively as long as he's able to keep defenses honest and stay in the game without fouling. Keep up the good work Shock.

This was a great week for comments so there are 3 winners. In order of rec's:

We released the Kraken.

Please. Maynor breaks the rules of the universe for breakfast

then rebuilds it for lunch and remodels it by dinner. And for fun, he makes a Lego version for supper. The Universe is his bitch.

This is how I see it, Pookey

Having a shot at Wall with one of the top picks even though we already have Tyreke on our team is like having a shot at acquiring a second wang. Now, you may think to yourself "I’m very excited about my current wang, it’s served me well, and frankly I’m not sure what I would do with a second one," which may lead you to pass on this fantastic opportunity and take a safer prize instead.

But what if you could master that second wang, Pookey? Just imagine the glorious possibilities for a moment (okay, stop imagining them now, it’s getting creepy). It would be like having a Ferrari and a fighter jet. "Which one do I take to work today?" It doesn’t even matter, because you’re in for an awesome ride either way.

In conclusion, we should draft Johnson… wait, I’ve confused myself…

PW: What’s up with the whistle?
Ref: JT’s about to check in. 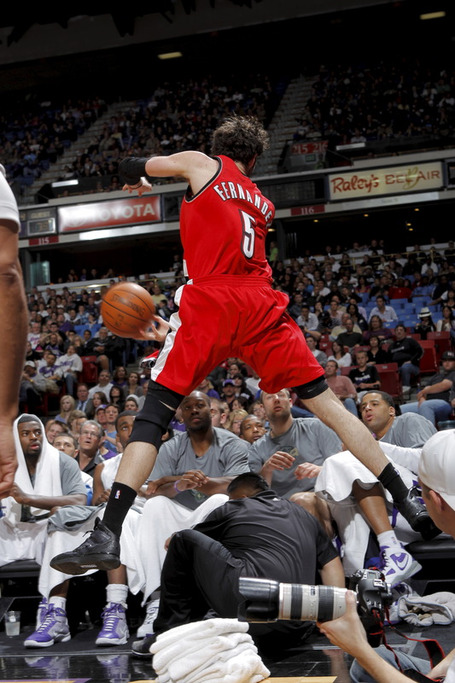 This picture should be a comedy gold mine.

The best Euro prospect in this years draft comes with a lot of questions and expectations. Just like many Euro big men who have some range, comparisons to Nowitzki have been made, but Motiejunas is closer to a mix between Channing Frye and Andrea Bargnani. A very poor rebounder for a 7 footer, he would weigh less than our point guard, and is also a pushover on the defensive end of the court. He's also got some red flags mentally, as he doesn't always seem to try his hardest, and plays much like a player who thinks he's better than he is. He does have some good points to him though as he is very offensively skilled both in the post and with his jumper, although his 3 point percentages aren't great or even good for someone who takes slightly over one a game (30%). The team that drafts Motiejunas better hope he can develop some mental and physical toughness or have an extremely skilled defensive presence to pair him with because otherwise he is going to be demolished in this league.

v. San Antonio 4/6 L (No Parker, but Manu is on a roll right now and Kings are banged up. Not having Spencer could hurt with JT on Duncan)

v. Dallas 4/10 L (Dallas just has too many weapons, and will likely still be fighting for playoff positioning.)