A Night to Remember

Share All sharing options for: A Night to Remember

As you probably know by now, I was a pre-game guest of the Kings on the XO Communications X-Over tonight.  It was a blast, and first off I'd like to give a huge thank you to Andrew Nicholson for setting it up.

On to the recap of my night:

My friend and I arrived at ARCO at around 6:15.  Upon arrival at the media entrance we were accosted by Security.

"You got to use the regular entrance guys, this is media and special guests only"

"Oh I know that, I'm here to be part of the pre-game show.  I'm going to be on the XO Communications X-Over"

"The what now?", he replied, clearly thinking us suspicious types.

"I'm supposed meet Andrew Nicholson here, you know who that is right?"

"Never heard of him"

"Um... well if its alright could I just wait here for him?"

"Yeah just stay out of the way"

So we waited by the entrance, along with some of the absolutely stunning Kings Dancers.  I also spotted Omri's brother talking to someone and saw Dominic McGuire come through as well.  After a brief time, Nicholson came and greeted us.  My friend wasn't able to join us by the court as Nicholson only had one pass,  so he departed for our seats.  It wasn't a complete lost cause for him though.  On his way upstairs he got into the elevator with a group of the Kings dancers.  That's all he needed to be happy.

Meanwhile Andrew led me to the media room where the first man I spot is none other than Jerry Reynolds.  I immediately go up to him and shake his hand.

Jerry's eyes automatically lit up and we automatically got into a discussion of the website (which he reads), Tyreke Evans, and even Jason Williams.  But of course, there was unfinished business between me and Jerry, and since I finally had him in front of me I asked:

"So Jerry, about that Brock Ness Monster..."

He immediately laughed and replied

"Ha, I read that you wanted me to split the royalties with you.  Well, tell you what, you can go ahead and have all of them because I haven't seen a penny"

Soon after he wished me luck and Andrew and I departed for the court.  I got the feeling that if Andrew and I didn't have to go prepare for the pre-game and a game wasn't on that Jerry would have been able to talk basketball with me for hours and have a good time doing it too.  Jerry, you're truly "Jerrific" - © Aykis16 2010

Admittedly I was a bit nervous heading onto the court.   I had never addressed so many people before, but Andrew and Scott (who came to meet us when we reached the court) did a great job prepping me and the layout of the show isn't as nerve-racking since it felt like I was just talking to Scott and Andrew.  I spotted BTE's shiny dome while we were setting up, but didn't see that sneaky section214 until it was too late: 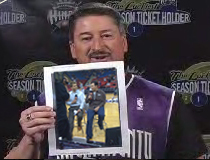 The actual interview went a lot smoother, quicker and easier than I expected it to and I was relieved when it was over and I had done better than I expected.  That's when BTE and section called over to me.  Thanks for the support guys.

Although I was close to the players, I didn't really try to engage them, although I did talk to Donté (thanking him for his retweet of me) briefly.  Jason Thompson was coming out of the tunnel when we were leaving the court and boy is he huge.  I have a 6'9 cousin so I'm not usually too awed by players sizes, but JT has a much bigger and way more muscular frame.

My night wasn't over quite yet after the interview was done.  Andrew offered to take me on a tour of the facilities before the game tipped off, and I saw a lot of cool stuff.  The buses for the Clippers, (Andrew shared a story with me about how Kevin Martin used to forego the team buses on the road and take a taxi to the game so he could get there earlier and put some extra work in, a habit he learned from Ray Allen during his rookie season).  The visitors locker room is apparently extraordinarily small, although my pass didn't allow locker room access.  I also got to see where the players park their cars (and I thought my '04 Camry was hot stuff) and met the man behind the Lion as Slamson went to get ready for tip-off.  Finally Andrew led me to my seats and got my address so that he could mail the X-Over segment video to me sometime during next week, and I will put up the video as soon as I can.

This night was a huge blast and the great game that followed was just icing on the cake for me.