Yesterday, I linked over to my graph and column regarding this season's big men prospects on offense. Grading defense at the college level is nearly impossible. But rebounding is assessable. So here's a graph showing the top big man prospects as well as top prospects from the past two years who made the NBA. The x axis show offensive rebounding (further to the right is better) and the y axis shows defensive rebounding (higher is better). This is not adjusted for the size or strength of the opponent, but by virtue of being rebound rate it is adjusted for pace. 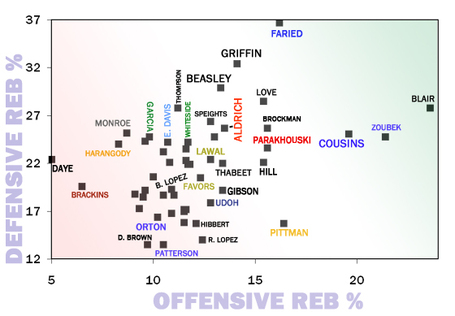 Cousins ranks just below Greg Monroe and Cole Aldrich in defensive rebounding. The contrast in the Cousins-Patrick Patterson and Derrick Favors-Gani Lawal relationships is interesting, both here and on offense. Cousins' superlative scoring and rebounding made the more experienced Patterson a role player. Lawal, though, ranks better than Favors on both offense and rebounding. Yet Patterson is higher than Lawal on nearly every draft board you can find, and Favors will likely go ahead of Cousins. I know defense and attitude plays a significant role in Favors-Cousins, but it's still interesting to me how this has shaken out.

And yes, I'm closer to "in the tank for Cousins" every day that passes.