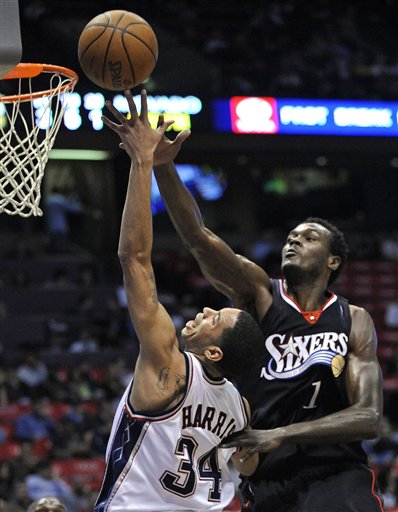 Now, since there was no criteria set, it’s sort of left up to me to establish the guidelines that we’ll be using. For example, the thread comment of this individual suggested that current old players and unproven young players both belonged on this list. I say that you can’t have it both ways. If you are projecting this list for 3-4 years down the line, then guys like Shaq, Tim Duncan, maybe even Yao have to come off this list. On the other hand, if we’re living in the present, don’t waste my time with the "upside" of guys like Hawes, Speights, etc. So, I’m going strictly by who is starting in the NBA today, and whether or not the Kings would be better off with these other big men.

For reference, Dalembert averaged 8.1 points, 9.6 boards and 1.8 blocks in 26 minutes a night last year. He was the 5th best rebounding center in the league last year in terms of average, 2nd in rate, trailing only Dwight Howard. His blocked shot totals ranked him 5th amongst centers (he was 6th in rate). Dalembert shot 55% from the field and 73% from the line (and took no 3 point shots!), but he is not a prolific offensive player. Simply, Dalembert hangs his hat on the defensive end of the floor, and we might have to go back to Doug Christie to find a rotation Kings player that fit that description.

Atlanta – Al Horford. I’m not going to argue whether or not Horford is a true center. He plays center for the Hawks, and that’s all that matters. I take Horford in a heartbeat. He works on defense, rebounds, scores efficiently, shoots free throws well for his position, and makes only $5.5 million (QO the following year, so he is due to get paid big soon). Sorry Dali, you’re down 0-1.

Boston – Kendrick Perkins averaged 10.1/7.6/1.7 for the Celtics this year. For what it’s worth, the 25 year old also drew 16 technical fouls and shot a frightening 58% from the line. Some say that Perkins would have greater numbers if he were not the 5th offensive option, while others say that he is the benefactor of playing with Garnett, Pierce, Allen and Rondo. I tend to believe the latter. Dalembert would have been a lot better in a Celtics uniform this year than Perkins would have been in a 76ers uniform. On Perkins side is the fact that he will make over $10 million less than Dalembert this year before becoming a free agent, and he is 4 years younger. But Dalembert brings more defense and less nonsense. This one is a push. Dalembert trails 0-1-1.

Charlotte – Tyson Chandler would be starting over Nazr Mohammed if he were healthy, so we’ll go with Tyson. For their careers, Chandler averages .5 more rebounds per game, while Dalembert counters with .5 more blocks per game. They score the same, with Chandler better from the field and Dalembert better from the line. This is also close, especially when you consider they both get paid in excess of $13 million this year before they become free agents. But Dalembert is healthy, and Chandler likely is not. Dalembert wins here, the score stands 1-1-1.

Chicago – Joakim Noah averaged a double double last year, and added 1.6 blocks per game. Somehow, he shot 74% from the line with that stroke, but only 50% from the field. He is 25 years old, he is inexpensive (at least until next year), and he is better than Dalembert, in my opinion. 1-2-1.

Cleveland – With Shaq a free agent, Anderson Varejao would be Cleveland’s current starting center, I guess. I’d take Dalembert over the Shaq circus for this Kings team, and while Varejao is a nice player, Dalembert is a better rebounder and shot blocker. 2-2-1.

Dallas – Erick Dampier is 34 years old and not as good as Samuel Dalembert. You might be able to make more of a case with Brendan Haywood, but he is neither a starter nor a Maverick. 3-2-1.

Denver – This one is closer than one might think. Nene is going to make $23 million over the next two years. He averaged almost one rebound less per game last year than Jason Thompson., and finished 24th amongst center in rebounding rate. His blocked shot ranked him 30th at center, just behind Jason Thompson. He averaged 13.8 points per game, which was 1.3 points better than Jason Thompson and good for 9th best in scoring at his position. In other words, Nene is a more expensive version of Jason Thompson. Understanding that he kills Dalembert when you compare their offensive talents, Dalembert makes more sense for this Kings roster than Nene. Yes, Nene is probably a little better when taken at face value. But Dalembert is better for this Kings roster. Dalembert now leads 4-2-1.

Detroit – Um, they have no center. Wallace is a free agent, Jerebko is a power forward (and not as good as Dalembert – not yet, anyway). Jason Maxiell? Charlie Villanueva? Mulva? Gipple? Delores! 5-2-1.

Golden State – Who is starting for them at center these days, Monta Ellis? Biedrins is the likely candidate, I suppose; he of the 4 year, $36 million contract and the 16% free throw percentage (4-25!). Dalembert has higher point, rebound and block averages for his career, playing at a slower tempo. You win another Juan, Samuel. 6-2-1.

Houston – The question is Yao’s health. I would trade Dalembert for Yao right now, without a physical, and take the chance. 6-3-1.

Indiana – If Roy Hibbert grows up to be as effective defensively as Samuel Dalembert, the Pacers will be very, very happy. He is not there yet. Now, Hibbert is younger, but one wonders how much better he will really get. This is a guy that finished behind Spencer Hawes in rebounding average and rate. Nice shot blocker, though not as effective as Dalembert. Much cheaper, but a plodder. Down the line or for cap purposes, Hibbert might be the choice. But today, it’s Dalembert. 7-3-1.

LA Clippers – I’m going with Chris Kaman here. You give up a little on defense, but he brings soooo much more to the table on offense. 7-4-1.

LA L*kers – Do me a favor – go check out Bynum’s last three years, the number of games that he has missed, the numbers that he has put up. The potential is certainly tantalizing, but where’s the beef? Yeah, I would trade Dalembert for Bynum. But I’d probably wind up regretting it. 7-5-1, in spite of my reservations.

Milwaukee – Like Yao (but to a lesser extent), his health can be a concern. But he’s uber-talented, and plays both ends of the floor (Tyreke putting him on skates notwithstanding). 8-7-1.

Minnesota – Don’t start with Al Jefferson, because he was a PF for the latter part of the season, after the Wolves determined that he and Kevin Love were not an effective starting duo. They went with Milicic (currently a free agent), and he was backed by Nathan Jawai and Ryan Hollins. 9-7-1.

New Orleans – I think that Okafor is the better overall player (though his 56% free throw percentage might say otherwise), but his contract is a lot worse (longer, anyway). Dalembert basically brings what Okafor could, and with far less long term risk. But since we’re dealing in the here and now, I’m going to give the edge to Emeka. 9-9-1.

Oklahoma City – Nenad Krstic is the starter for the Thunder, and Dalembert is better for the Kings than Krstic would be. Ibaka is behind him and developing, though I think that he will ultimately be a PF. Hello, Dali. 11-9-1.

Philadelphia – Speights and some young kid out of Washington. Maybe they’ll eclipse Dalembert someday, but not today, and likely not this year. 12-10-1.

Portland – I like Oden, but he’s oft injured. I like Pryzbilla, but he got injured while rehabbing. That leaves Camby, I guess, who I also love, but he turned 36 in March. Healthy and/or younger, I might take any of these guys. But today (and amazingly), Dalembert might be the best of the bunch. I’m taking Dalembert for now, but this switches the moment Pryz or Oden get a clean bill of health. 14-10-1.

Toronto – Andrea Bargnani is turning into a very nice player. He’s really a bit of a defensive liability, but he is such a good offensive player. In spite of the fact that the 325 3’s that he shot last year (yep, practically 4 per game, hitting 37%) would cause seizures among many of the StR faithful, I would take Andrea over Sammy. 15-11-1.

Utah – Okur is Bargnani Lite. He doesn’t do quite enough offensively to make up for his overall lack of rebounding. I’m taking Dalembert here. 16-11-1.

Washington – Fabricio Oberto was starting at center late for the Wizards, but he’s gone, so I guess it’s Javale McGee, unless they move Blatche over from power forward. But until they do, Dalembert > McGee. 17-11-1.

So there you have it. I come up with 11 guys that would be better for the Kings this year. As far as the future is concerned, Dalembert either will or won’t earn a new contract with the Kings. And the cost was an unhappy, overpriced forward that no one wanted to see play ahead of Greene and Casspi, and a square peg in a round hole that just seemed to always be on the outside looking in (I will be rooting for Spencer – hopefully Philly will be a better fit for him). I had pitched the idea in the threads over the past few months that perhaps the Kings could utilize their cap space and obtain Dalembert for the 2nd round pick. I think that I might like this deal better.