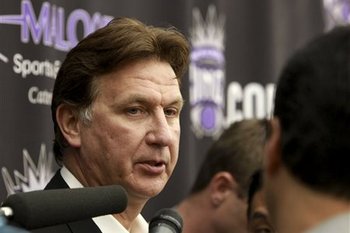 "No I'm not crazy, and neither am I. Next question!"

From 1998 to 2000, Geoff Petrie scorched the earth. He drafted Jason Williams. He traded Mitch Richmond for Chris Webber. He signed Vlade Divac, as well as Vernon Maxwell and Jon Barry and Scot Pollard (among others). He signed Peja Stojakovic, whom he had drafted the year prior. He drafted Hedo Turkoglu, signed Bobby Jackson, and traded Corliss Williamson for Doug Christie.

These were the moves of an aggressive and fearless general manager. Williams, Webber and Maxwell had "pasts," and Divac had to be overpaid to get him to come to Sacramento (or so the story goes). Peja and Hedo were unknowns; at least to most everyone not named Geoff Petrie. Ballsy moves that paid off in spades.

From 2001 to 2004, the deals abated, but impact was still felt. Williams for Bibby in 2001. Hedo and Pollard for Miller in 2003. Petrie became known as a conservative, a guy that pondered much, but rarely acted on his ponderings.

2006 - Peja for Ron Artest. I find this time interesting, because many are saying that Petrie is now building a tough as nails team for the first time. Show of hands – how many people would like to mix it up with Bonzi or Ron-Ron? Later, Petrie pulls John Salmons away from Toronto, leaving Bonzi Wells in the dust after Wells rebuffed a 5 year, $35 million offer.

2007 was fairly quiet, and many began wondering, is Petrie conservative, or dead?

And then 2008 rolled around, and somebody spiked Geoff Petrie’s coffee. The ponderer was gone, replaced by a guy that was suddenly making deals as if he were in a fantasy league. Since 2008:

Swapped 2nd round picks with Portland, netting Sergio Rodriguez and cash to pay his salary.

It was just a couple of years ago that some of us were questioning whether Petrie was nimble enough to rebuild a team. Sure, he had proven that he could assemble a winner. But could he deconstruct and reconstruct? Well, the salaries are gone, so I suppose the deconstruction is pretty much complete. The reconstruction has begun.

I’m not a fan of every one of Petrie’s draft picks or trades, but he sure seems to get a lot more right than wrong, and he sure has proven recently that he’s not all scared of taking a chance or pulling the trigger. I don’t know what the draft holds, and I don’t know which of the current players will or will not be on the roster at this time next year. But I know one thing, and that is that I am fastening my seat belt. Geoff Petrie is at the wheel, and he is flat, freaking nuts.