On Thursday I got a text message.  "Nocioni and Hawes just got traded to Philly for Dalembert."  Of course it had to happen during a week when I was completely swamped with work and would have absolutely no opportunity to draft a response.  So please forgive the tardiness of this article, I had to write it.

So, Spencer Hawes.  Spencer conflicted me like few players ever have.  Normally you like a guy or you hate a guy, and you stick with that opinion (see Thabeeeeeeeet, Hasheem).  When the Kings drafted Spencer, I hated it.  A big white dude with bad knees, I was sure it was going to be a disaster.  I can't remember exactly when things changed, but one day I found myself rooting for Spencer.

Maybe it was because he could pass, and he didn't look like those other clunky centers with bad knees.  He was young, big, and I bought into the concept that he could be part of the future for this team.  Back and forth I went, Summer League turned me against him, "Popcorn in my whip" had me in his corner.  As Spencer's time as a King comes to an end, I find myself squarely in support of him.  I don't know the he can overcome his deficiencies, but I believe in him. If Spencer had spent the last three years tearing through college players, I think he'd be one of the earliest players off the board this year.  I still think he can figure it all out.  But I'm also relieved that I will no longer have to eagerly wait for that day to come.

Through all of this, I like this trade for the Kings.  Getting rid of Nocioni was necessary, and Samuel Dalembert is a player I've liked for a long time.  The worst part of this trade is that I have no clue how to work "Dalembert" into song lyrics. It seems we've been trying to replace Divac ever since he left.  We thought Brad Miller could fill the void, and then Hawes.  Maybe Dalembert will help us all move on.

Spencer Hawes enters the realm of other favored Kings.  When Webber was traded, it was the right move even if I was sad to see the Webber era end.  Ditto for Peja, and for Kevin Martin.  Perhaps Gerald Wallace would be a more apt comparison.  The point is that these players enter the collective concept of the Sacramento Kings, and they remain in our consciousness long after they leave.  Spencer will be a player I root for against every opponent except Sacramento, and I wish him the best.  At the same time I look forward to watching Dalembert, and I hope that he too enters that lasting concept of the Sacramento Kings. 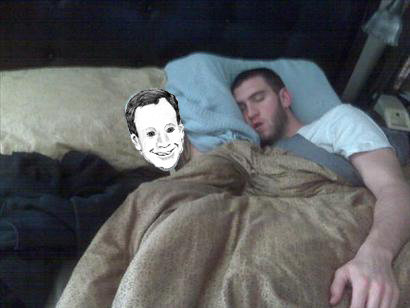 Shhh, he can't hurt you anymore...