The Greatest Time to be a Kings Fan

Share All sharing options for: The Greatest Time to be a Kings Fan 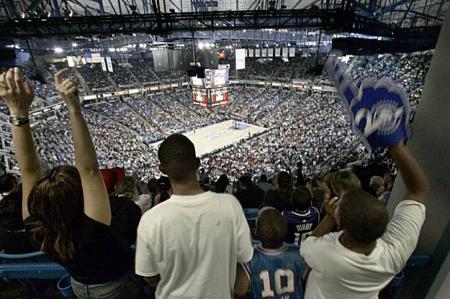 Yesterday, the Kings drafted DeMarcus Cousins and Hassan Whiteside and solidified their position as one of the best up-and-coming teams in the NBA.  The so-called "experts" have varied on their reactions to these picks, stating that Cousins and Whiteside both have huge risks, and that despite their talent, they could end up not panning out.

I don't care what they think.  Yesterday, the Kings took a huge step forward back to the road of relevancy, and possibly even more than that.

DeMarcus Cousins, despite all the red flags around him, is largely talked about as the best talent in the draft (next to Wall).  Sacramento has had a great history of bringing in supposed headcases and having it work out: Chris Webber, Vernon Maxwell, Jason Williams, Ron Artest, Bonzi Wells ... the list goes on.  DeMarcus really seems to love the game and is confident in himself and the fact that he can become "the best player in this draft".  I have high hopes that this will be the case.  Another thing going in his favor is that he actually wanted to come to Sacramento.

Hassan Whiteside meanwhile, was always projected as a project, but one with ENORMOUS upside.  7'0 with a freakish 7'7 wingspan, he fell in the draft because of questions of his maturity and ADD issues.  Now, I don't always agree with Jay Bilas, but I believe he said it best when the Kings drafted him: "Whiteside would have been a risk/reward pick in the first round.  But here in the 2nd, he's all reward"  I completely agree. Whiteside comes in for cheap, we can sign him for 2 to 5 years, and we have plenty of time to develop him.  This could end up being like having another lottery pick.

The Kings also recently got rid of their worst contract in Andres Nocioni (who didn't want to be here) and an intriguing big man in Spencer Hawes for the services of Samuel Dalembert, who also wanted to be here (I'm sensing a theme).  Dalembert brings the two biggest things the Kings have lacked in recent years, rebounding and shot blocking.  At 29 years old, he's young enough that the Kings can re-sign him if they like him.

The best part of these additions is how it makes the team better.  We've addressed our weaknesses in the frontcourt, but we've also improved our team's talent base.  In practice now, Tyreke and JT are going to have to go up against some intimidating presences in the middle for once.  Perhaps they'll become more adept at not getting their shots blocked.  DeMarcus will have to learn to guard an offensive dynamo in Carl Landry or try to score against Samuel Dalembert.

The Kings also have flexibility for the future.  Only Beno and Cisco have contracts that extend past the CBA, and I don't see the Kings trading them as they bring veteran leadership and both have the ability to play with 'Reke in the backcourt.  The Kings do have quite a bit of money though, money they can use to shore up the guard spot, or wait to re-sign Carl Landry or Dalembert next year after the CBA.  Here's a short list of some of the guards the Kings can go out there and target:

As you can see, the Kings are not lacking for options, especially when you consider all the talented guards that went undrafted somehow.  Right now this is what the Kings roster looks like:

That's 11 roster spots, with 12 being the minimum, and the Kings likely to add maybe 2 players, probably to the backcourt.  This is a roster now loaded with youth and talent.

Now, as expected, even the draft was dominated by LeBron, with most people calling the Bulls the winners of the draft as they were able to unload Kirk Hinrich on the Wizards to free up enough cap space to get two max level guys.  Something I think these "experts" are missing out on, and that Kings fans should be excited about, is that the Kings now have potentially two franchise level players in Tyreke Evans and DeMarcus Cousins, at the two most difficult positions to fill.

Like DeMarcus said "We're gonna bring back some W's next year". Yes, yes you will. And the years after.

It's a great time to be a Kings fan.