On Hedo Turkoglu and Bad Ideas

Share All sharing options for: On Hedo Turkoglu and Bad Ideas

As you've no doubt heard, Hedo Turkoglu has apparently expressed a desire to return to Sacramento.  Ever since Turkoglu was traded from Sacramento, there have consistently been rumors of Sacramento and more specifically, Geoff Petrie, wanting him back, so there could be credence to the rumors that the Raptors and Kings will talk.

But I think its a bad idea, unless the Raptors make a horribly lopsided trade in Sacramento's favor.  Here's why.

1. Hedo Turkoglu has 4 years and 43.8 million left on his contract.  The 4th year is a player option for 12 million dollars that Brother Hedo would be absolutely insane to waive.  Taking into account that the new CBA will likely lower the salary cap and player salaries, Hedo's contract could look even worse than it does now.

2. Andres Nocioni, the player mentioned in the Woj article as being the one dealt for Turkoglu, has only 2 years left, with a 3rd year as a team option that is unlikely to be picked up.  Also, Nocioni's contract declines slightly, while Hedo's rises each year.

3. Hedo has been declining for 3 years in a row now.  He will be 31 to start next season, and his statistics from last year are not much different than Andres Nocioni's Per 36 minutes.  In fact, Noc averaged more points and the same amount of rebounds as Hedo Per 36.  Their FG% and 3P% are relatively comparable as well, although Noc was better from distance.  The only thing that Hedo really trumped Nocioni on was assists (4.8 to 1.8 Per 36).

5. Hedo is definitely a downgrade when compared to Nocioni on the defensive end.  While Nocioni was perhaps not as effective on defense this year as he was in years past, Hedo has never been known for his defensive prowess, and his lack of real speed or athleticism limits him in this area.  Paul Westphal clearly values defense, sitting players or playing them based on their defensive effort.  This was most noteable with Spencer Hawes and Donté Greene.

6. Hedo's addition would mean that if Donté Greene or Omri Casspi (Not to mention that the 5th pick could end up being Wesley Johnson or Al-Farouq Aminu) ever develop into good or even great players, we would have a $10,000,000 + backup for a few years. 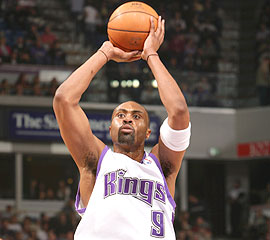 7.  Acquiring Hedo kills a bit of the cap flexibility that Geoff Petrie has taken so long to acquire.  A team looking to deal Hedo is not working from a position of strength, as the Kings so often themselves have learned (Chris Webber, Mike Bibby).

8. (Thanks to KF10) - Hedo's contract has a 15% trade kicker, so if the Kings traded for him, his already horrible contract would become 15% worse.

The only way I see the Kings making this trade is if they are able to unload both of their worst contracts (Nocioni and Garcia), and pick up a youngster in Derozan as well as the 13th pick in this years NBA draft.  Then it might all be worth it, as Nocioni and Garcia's contracts are lumped into one bad contract as well as reducing our wing depth.  Derozan and the 13th pick would be the sweetener for having to take his contract off of Toronto's hands.  Just Derozan or the 13th pick wouldn't be enough in my opinion.

I think a lot of the facts back me up.  It just wouldn't be a good idea to re-acquire Hedo.  I loved him when he was here, and will remember his time here fondly, and I don't want to tarnish those memories.  So I'm sorry Brother Hedo, but I just don't think it would work out.