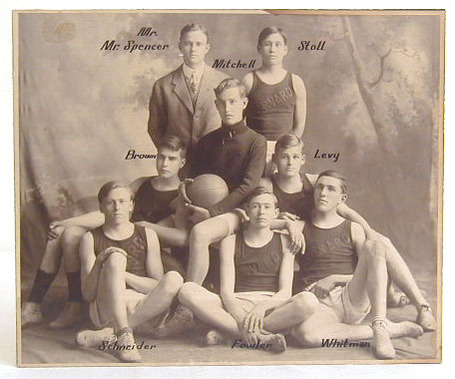 This is what happens when you don’t pay attention to your time machine radio dial, and you wind up setting the station for 1890 instead of 1990. For some reason, no matter how many times I told them that my name was "section," they insisted on calling me "Mr. Spencer". And by the time we shot the photo, I had become "Mr. Mr. Spencer." Sometimes time travel isn’t all that it’s cracked up to be. Oh, and Stoll is a madman!

I got back into the Passat and adjusted the rear-view mirror. I caught a glimpse of Russell leading the guys into the practice facility. Strange times, indeed. I took one last look, just in time to watch Joe Kleine trip on the curb. Ah, some things are timeless.

Faith No More was whisking me towards 1990, where I had a date with destiny and Lionel Simmons. The VW Passat / time machine was spitting a little oil, and the back seat headrest where Theus was sitting was covered in "Soul Glo." But I was burning daylight, and I wanted to at least get this trip done before the day was over.

I caught up with the "L-Train" at  ARCO II. Simmons was watching Ralph Sampson get ice treatments on his knees, and he was giving Sampson the "old man" treatment. I wanted to give Simmons a karma warning in regards to bad knees, but I didn’t want to take a chance on altering future events with my meddling – my daughter does not need a third eye or penis, thank you very much - and I was not about to take any chances.  But Simmons did average 17 and 8 from the small forward position when he was healthy, so I wanted him for camp. I lured him to the car by challenging him to a game of "Sonic The Hedgehog," and we headed for 1991, courtesy of The Divinyls:

Mitch Richmond – Any question? It was easy getting Rock into the car, as he thought that he was getting out of Sacramento. We also invited Spud Webb, as we figured that he wouldn’t take up too much space. We approached the parking spot that housed the VW. Richmond looked down, and noticed that he had a toe on the line. He gave me a sheepish grin, held up two fingers, and got in the front seat.

With a little "Whoomp! (There It Is), we made a quick stop in 1993 to pick up Olden Polynice. Stats notwithstanding, how could you possibly hold a camp without OP? Plus, his fake police ID would have come in handy had we been pulled over by the time machine police. OP provided a lifetime of entertainment in his five years in Sacramento.

The addition of Grant put us at five players. Rather than putting any of the players in the trunk at this time, we chose to set Spud on the rear window deck.

The radio dial was still set for 1994, and the Spin Doctors were singing about a big, fat, funky booty. Say no more – I moved the dial forward a year, and we went in search of Corliss Williamson. The Big Nasty won’t knock anyone’s socks off with his stats. Between Corliss v1.0 (1995-2000) and Corliss v2.0 (2004-07), you had a guy that averaged about 11 points and 4 boards a game. But Corliss was the first guy that was happy to come to Sacramento, Corliss was the first guy to play with Richmond that was willing to take the big shot when the Rock had five guys covering him, Corliss was always ready to play, and never groused when he didn’t. He was an asset while he was in Sacramento, and he brought Doug Christie in trade. Corliss was coming back to the future with us, and not in the trunk (we lured Polynice in there instead with a reverse "OP Dope").

We had time and space for one more guy, so we set a course for 1997. R. Kelly came on the radio, and it was like the scene out of "Tommy Boy." Everyone feigned disgust, but no one offered to change the station. It took us only nanoseconds to arrive in 1997, but we all sat through the entire song:

If I can see it then I can do it
If I just believe it, there's nothing to it

If I can see it then I can be it
If I just believe it, there's nothing to it

Hey 'cuz I believe in me
If I can see it then I can do it
If I just believe it, there's nothing to it

The Passat was now filled with tears, including the trunk (we could hear Polynice sobbing from behind the rear seat). Spud jumped off the rear deck and cuddled in Corliss’ arms, while Richmond dabbed his tears with one of Brian Grant’s dreads. We took a moment to compose ourselves, and then we headed in to fetch Lawrence Funderburke.

"L-Funk" (as he was known to absolutely no one), never averaged 10 points a game or pulled down 5 boards per during his six years in Sacramento. But he always answered the call, and as I mentioned earlier, I needed me some power forwards. We put Lawrence in the trunk with Polynice, advising OP that he was not to put the fun in Fundy. Polynice nodded slyly, and Funderburke sported an unbridled look of terror as we closed the trunk lid.

We arrived back in 2010, and it was late. We opened the trunk of the Passat, and Polynice and Funderburke were asleep and spooning. The guys helped to get them out of the trunk and into the practice facility.

I had enough time to get home for a little Pickle tickle (it’s not what you think – we have a hamster named "Pickle," and he loves to be tickled under his little hamster chin.  He used to be named "Mr. Pickles," but we ran into a little legal trouble with a sandwich chain. We also had to put down "Togo’s" the cat, but that’s another story for another time. Right now I needed some sack time. I’d be traveling to 1998 come morning. 1998. 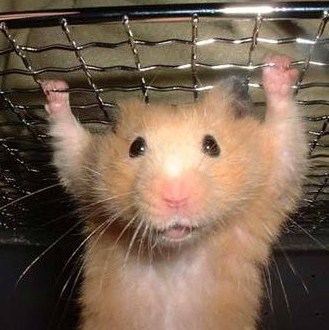