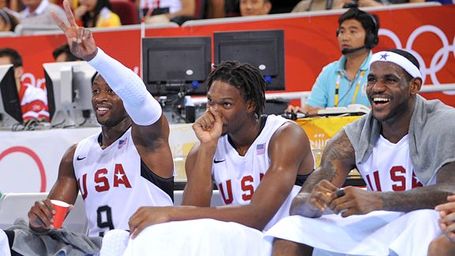 As you no doubt know by now, LeBron James has decided to leave the Cleveland Cavaliers organization and join Dwyane Wade and Chris Bosh in Miami to play for the Heat.  But should we as Kings Fans care? The short answer is not really.  The long answer is a little bit more complicated.  Find out why after the jump.

The first thing you have to realize is that the Kings will only have to play the Heat twice a year.  So the only time we'd ever have to play them in the playoffs would be in the NBA Finals, something that is probably a ways away.

LeBron has mentioned that he's signed a 5 year contract.  That's likely to be the same for Chris Bosh, while Dwyane Wade was offered the full 6 years with Miami's Bird Rights.  Wade is the oldest, as he will be 29 next year.  Bosh and LeBron will both be 26.  The Kings have one of the youngest teams in the NBA, and last year having the team with the least experience in the NBA (that is likely still the case as we've gotten rid of Andres Nocioni and Spencer Hawes while adding two rookies).  We're likely two years away from the playoffs, nonetheless even thinking about the NBA title.

The Glory Day Kings were first really built in the 1998-99 season with the acquisitions of Vlade Divac, Chris Webber and Jason Williams.  In that lockout shortened season they grabbed the 8th spot, but failed to advance, even though they took the Jazz to the brink.  It took another two years for the Kings to even get to the 2nd round, where they were swept by the Lakers.  Finally they were ready for a Championship run in 2002 (4 years after they first got into the playoffs), and even though they lost in 7 in the Western Conference Finals, they came back arguably even stronger in 2003, and only faltered because of Webber's devastating knee injury in the 2nd round.  That team was much more experienced than the current group, and it still took them 4-5 years to actually become contenders.  To me, that's the best case scenario for the Kings.  It's unlikely we'll run into Team USA South Beach edition during the life of their contracts.  If we do, that'd still be remarkable.  It'd mean that DeMarcus Cousins and Tyreke Evans have likely become world class players, and the rest of the team has become solid as well.

But for now we can't worry about Miami.  We have to worry about other up and coming teams in the West, like the now mighty Thunder, the ever solid Lakers and Mavericks, the young but talented Grizzlies, Clippers, and Warriors.  These are the teams that will likely become our rivals over the next few years as we rebuild ourselves back to relevancy, not Miami.  So even if Miami manages to pull off a few titles in the next few years, I don't think it will be at the expense of the Kings. And if it is? Well that means we got a lot better than I thought we'd be, a lot quicker than I thought it would happen.  And that's still a good thing. Because our team will likely still be relatively young.

Our future is bright.  Let Miami dominate for the next 4 or 5 years before the Big 3 break up once more.  We can wait.