When the full 2010-11 NBA schedule was released earlier this week, it became clear the Kings would have a pretty accomodating slate early on but huge difficulty from mid-December on. (Sort of like 2009-10.)

But just how easy is the first part, and just how difficult does it get?

I used Bill James' log-5 prediction method, as adapted to NBA use by current Rockets analyst Ed Kupfer, to map out the weakest and toughest stretches of the Kings' '10-11 schedule. There are some inherent difficulties in doing this now, one of which being several teams changed dramatically this summer. For now, I've used last season's record as the variable for opponent strength; clearly, Cleveland won't be as good as they were last year, and Miami will be better. But season-to-season quality tends to hold pretty well in the NBA, so big picture this should look just about right. (Later, when Basketball Prospectus' new book comes out, I'll update using Kevin Pelton's team projections.)

As the key notes, the purple line represents the game-to-game win probabilities, based on opponent record and home court advantage. The red line is a moving 5-game average of the Kings' win probability. That helps us see trends in the schedule's difficulty. One more important note: I have assigned the Kings' ability (or winning percentage, in this case) as that of a 32-50 team. That's my official prediction as of August 13. Put it in the book, and ... well, you know. 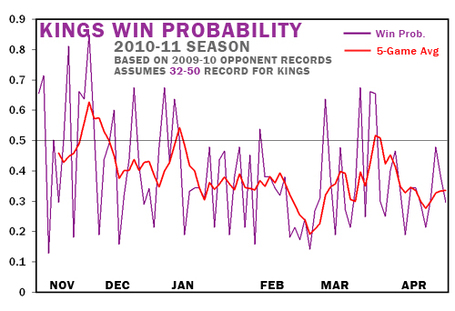 After the jump, some interesting (to me) notes about what log-5 says right now.