Revenge of the Box Model

Share All sharing options for: Revenge of the Box Model

A little over a year ago, I introduced a test version of the so-called Box Model, a compact graphic way to show team performance. There was some really great feedback in that thread, from fans of the idea but also from critics. Holmdel and smgmatt, in particular, made some key points about the readability of the graph.

It's been a while, and I think about the Box Model every now and then. And since there's no way I can write as beautifully as section214, I've taken another shot at the Box. Here's the Kings' 2009-10 version of the prototype. An annotated copy, the Lakers' and Warriors' Boxes and more explanation after the jump. 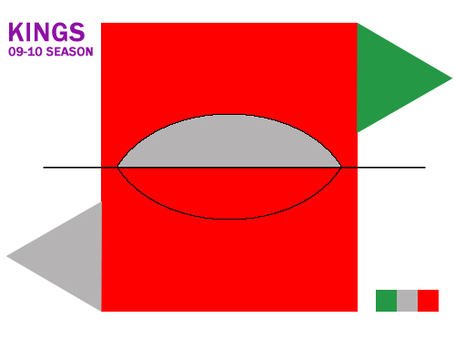 Here's the annotated version for some cursory explanation: 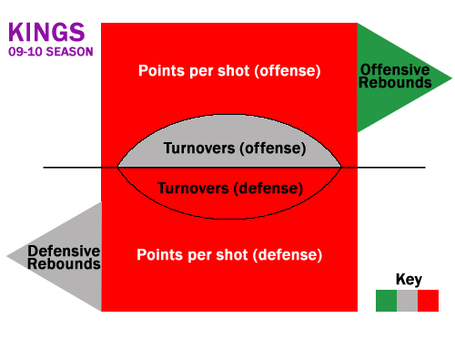 * The first thing you might notice: this box includes both offense and defense. I wanted to find an economical way to present both sides of the court on one graph. The old Box Model didn't really allow that, because it had a lot of detail. Which brings me to ...

* There's still some representation of what offensive rebounds and turnovers actually do. You'll notice that the turnover half-ovals cut into the PPS rectangles; that makes sense, because turnovers take away from a team's ability to score. Inversely, offensive rebounds add to a team's scoring ability, so the "added" triangle can be interpreted as extending the PPS rectangle.

* The color scheme is as simple as possible. I really had to keep myself from adding in a fuller range of values, but three is good for now. Green signifies good. Gray signifies average. Red signifies bad. It's important to note that the colors stay with the team being studied: a red PPS rectangle means that the team has a bad shot defense, it doesn't mean the opponent's PPS is low. The Kings have a bad shot defense -- that's why the lower PPS rectangle is red.

The Kings were pretty bad last year. We know this. The Box Model shows you how they were bad, and whether they were good at anything. Let's look at it again.

Good on the offensive boards, average in own turnovers and defensive reboundings, bad at everything else.

What about the champion Lakers? 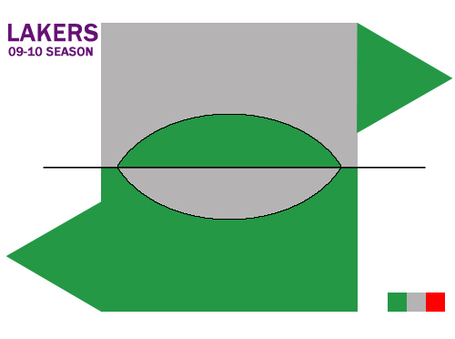 There's no red there. That's a good team. The Lakers were about average in shooting and turnover creation, and good in rebounding on both ends, own turnovers and shot defense.

That's depressing, so let's look at a less glowing Box Model. Say, anyone seen the Warriors? 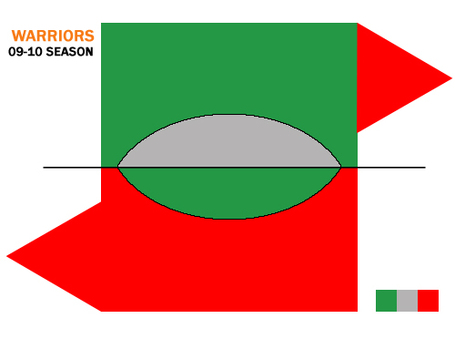 This one tells a pretty good story: the Warriors shot well, and forced a lot of turnovers without giving up the ball too much. But rebounding on either end? Shot defense? Baaaad.

We already knew the Warriors were bad, and we knew the Kings were bad. But this is a nice, easy way to show you how they were bad. Because all bad basketball is not the same.

One more advantage of stripping details and going with a simple color scheme? You can shrink it down to be even more economical.

As always, I appreciate thoughts and feedback. I hope to, in the next few days, adapt this for game-by-game use with a few test runs. Adapting for individual performance might be trickier, but I have some other ideas on that.