Spoiler Alert! The time machine is not the strangest thing about this episode.

The alarm chirped menacingly from the night table. I flailed at my sleep-depriving nemesis, neutralizing it on my third attempt. Mrs. section214 nuzzled me with a well-placed elbow to the top of my spine. I stirred to the state of consciousness that I was apparently destined to achieve for the morning. I laid there, wondering if it had all been a dream.

"Would you care to explain the Volkswagen in the garage?" asked Mrs. section. "I went out to the garage last night, and there it was. What happened to the Oldsmobile?"

"I loaned it to a friend," I answered benignly, while wiping the sleep from my eyes. "He’s part of an illegal ring that imports Pandas and lead paint from the Pacific Rim, and he needed the extra room."

"Well," Mrs. section responded, "Don’t forget to feed the dogs before you leave for work." 1,935. I needed coffee.

45 minutes (and a $12 "I love you" from my daughter) later, I was in the Passat. I quickly determined that the traffic on Westbound 80 coming out of Roseville was not going to allow me to get up to the required 88 miles per hour, so I exited the Freeway at Madison Avenue and turned around, heading up 80 East. I set the radio to 1998. CHUMBAWAMBA!

The Passat entered 1998 just as it had left 2010, heading east on I-80. As I slowed to 80 miles per hour, a pair of Mercedes’ shot by me, one on each side. The plates on the left read "C-Webb," while the plates on the right said "J-Will." Yep, I was definitely in the right place.

I turned around and made my way down to ARCO. The practice facility was still two years away from being built, so I headed for the arena. The security guard was a dead ringer for Rex Hughes. He initially denied me entry, but when I offered to him that I knew Grant Napear’s secret nickname and that it was guaranteed to enrage the redhead, he agreed to let me pass. I could hear the guard laughing over my shoulder, repeating "Peaches" over and over again to himself as I disappeared down the hallway.  If my daughter was to wind up with a penis over this one, so be it. It was worth it.

I had a pretty big shopping list for this stop: Chris Webber, Vlade Divac, Peja Stojakovic, and Jason Williams for sure. I also had my eyes on Scot Pollard and Jon Barry, two fan favorites whose contributions far surpassed what appeared on a stat sheet.

I made my way to the hardwood floor. Vlade was under one basket, taking a drag on a Camel and trying to teach Peja proper pronunciation of English profanities. Peja was struggling a bit - "Beetch. Cheit. Phock." Barry and Pollard were at the other end, both telling JB how good he was. Webber and Williams entered soon thereafter. Vernon Maxwell was sitting in the first row, trying to burn ants with a magnifying glass and a flashlight. I was determined to stay away from Mad Max. Oliver Miller was sitting in the second, third, and fourth rows. No way the Passat handles that payload.

Jerry Reynolds appeared in the tunnel. "Oliver!’ he shouted. "Buffet is open, and Jerome James is already in line!" Miller rumbled down the tunnel. "Vernon," Reynolds continued, "Michael Hawkins is rummaging around in your locker, and he has your black book." Maxwell shot down the tunnel. Reynolds winked and left me with the gang of six. I gathered myself, took a deep breath (note – never take a deep breath after Oliver Miller runs by you), but before I could say anything, Divac spoke, and the following conversation unfolded:

Divac: Mr. Jerry told us why you are here.

Barry: Yeah! A time machine? Oh, boy! I can’t wait to see how my hair plugs turn out.

Divac: It is a very unusual plan. I told Mr. Jerry, ‘If you can build time machine, maybe I can build restaurant.’ We shared good laugh.

Webber: Yeah, I think I’ll open a restaurant, too. Heh-heh. Good one, Vlade.

Pollard: I once made a time machine when I was at Kansas. I traveled back in time and visited the Mayans. My hands were a combination of claws and suction cups, and the Mayans worshipped me.

Williams: Hey, Scot! I’ll take some of whatever you’re having there, you f*cking weirdo. I swear to God, Pollard, you are the sickest f*cking f*ck that I’ve ever f*cking met. I f*ckin’ love you, though, you f*ck.

Stojakovic: I no Russian. I Serbian.

Williams (With Webber, Divac, and Pollard all rolling around on the floor amid tears of hysterical laughter, Williams throws his arms into the air in disgust and resignation):  F*ck it. I f*ckin’ give up.

Barry: Man, the future. I’ll bet that my old man will be a head coach by then.

Pollard (rolling his eyes): Yeah, that’ll happen. And they’ll make bobbleheads out of my likeness, too. Hey, that reminds me of the time that I visited Stonehenge…while it was being built.

Stojakovic: What is bobblehead?

Vlade: Section, we are interested in coming to the future with you, but we are concerned that maybe in the future the Kings will get players that will be even better than us and we will wind up traveling a long way, only to not make the team.

Me: I give you my word, Vlade, that won’t be a problem for some of you. And Peja’s English gets a lot better in the future.

Williams: Well, it’s not going to get any f*cking worse, I can f*cking guarantee you that.

Me: By George, I think you’ve got it.

Stojakovic: Who the f*ck is George?

Pollard: Man, I haven’t traveled forward in time yet. Wait ‘till the future cats get a load of me. Hey section, I’m going to be the camp character, right?

Me: Uh, sure, Scot. You bet. (I didn’t have the heart to tell him about one Ronald William Artest, Jr.)

We made our way out to the Passat. Webber wouldn’t even settle for shotgun – he insisted on driving. Williams took shotgun, and I wound up in the backseat in between Peja and Vlade, who were engaged in a slap fight with each other. Pollard refused to share the trunk with Barry, so JB headed to the roof with assurances from all of us that it would not mess up his hair. Webber flipped the key to the ignition, started the time machine, and then turned and looked back over his shoulder at me.

Webber: You really think that you can pull this off, section?

Webber turned back and peered through the windshield. 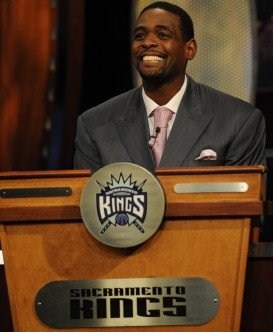