30Q: Can the Kings Be Elite Offensive Rebounders?

Share All sharing options for: 30Q: Can the Kings Be Elite Offensive Rebounders?

Last season, the Kings finished sixth in the league in offensive rebounding. That performance was the best it had been in years. This was with Spencer Hawes, Jason Thompson, Sean May, Andres Nocioni, Jon Brockman and, for half a season, Carl Landry manning the frontcourt.

Things have changed up front. Samuel Dalembert, one of the best rebounders in the league, has replaced Hawes. Hassan Whiteside has replaced Brockman (a world-beating offensive rebounder) and May at the back of the rotation. DeMarcus Cousins has been added. There will no more small forward-masquerading-as-power forward nonsense. This is a longer, stronger, more athletic frontcourt.

How will that affect the offensive rebounding?

After the jump, I break it down based on the different frontcourt combinations' rebounding expectations.

For veterans, I used last season's rebounding performance as the data here. For the two rookies, I took about 15 percent off their college performance. It's a rough approximation -- good enough for our purposes and in line with what each did at Vegas Summer League.

For the backcourt, we'll use the default Tyreke Evans-Beno Udrih pairing. This will make our projections somewhat conservative -- Francisco Garcia is a better rebounder than Udrih -- but it's the default heading into the season, so there you have it. For the small forward position, I'm spliting the difference between Omri Casspi and Donte Greene, who should see similar minutes no matter who starts.

Here are the most likely combinations. 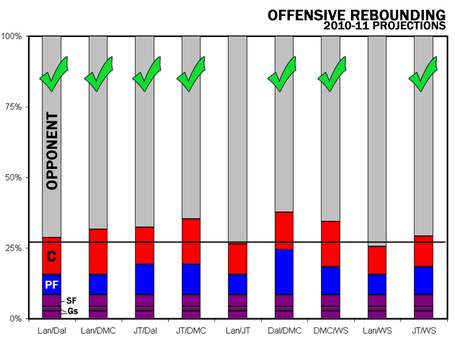 The combos I expect most frequently are on the left, moving down to the least common. "Lan" is Carl Landry, "Dal" is Samuel Dalembert, "DMC" is DeMarcus Cousins, "JT" is Jason Thompson and "WS" is Hassan Whiteside.

Seven of the nine combos would be projected to beat the league average for offensive rebounding. Six of the combos -- including expected pairings Landry-Cousins, Thompson-Dalembert and Thompson-Cousins -- would rate comparably with the league's best offensive rebounding team last season, the Grizzlies. Cousins-Dalembert would break the scales. The only expected unit projected worse than league average includes Landry-Thompson ... but that unit is basically at league average.

Assuming everyone rebounds on offense as they have (in the NBA or college), we can expect the Kings to get plenty of offensive rebounds game after game, and it wouldn't be a surprise if they finished in the top three in the league in the category. Including either Cousins or Dalembert in any line-up projects the unit to rebound offensively better than league average, and in the other non-Whiteside case -- Landry-Thompson -- the difference is negligible. The big upgrades since last season have certainly bolstered the team's offensive rebounding.

That's not the case on defense, where there are substantial diminishing returns. Adding good defensive rebounders will help, but it's not simple addition. In other words: no, Cousins-Dalembert won't hold opponents to one offensive rebound in every 10 opportunities. (That's what a projection similar to the offensive rebounding one says. It's not right.) On defense, let's surmise we'll be improved. To what degree is more a guess than an estimate.