There's something off about this picture...

Needless to say this wasn't a good week for the Kings.  It almost ended on a good note, with a solid win against New York and what looked like a solid win against Detroit before a 2nd half collapse dropped Sacramento to 1-4 on this 6 game road trip, with a not very winnable game against the Hawks coming up to finish it up.

Now that's what I'm talking about.  New York scores the most in the league and we held them to almost 25 points below their average.  Tyreke made a big difference on that end, and Samuel Dalembert was huge too, with 6 blocks.  Amar'e Stoudemire usually kills us, but only was able to manage 25 points on 6-22 this time, with a big credit to Sammy D.

3.  Carl Landry has got his Groove Back

Carl has definitely looked more like himself this week.  He's not shooting his jumpers as far away (and he's shooting them with more confidence as well) and more importantly, he's not taking as many jumpers, opting to go inside for the majority of his points.  As such he probably had his best week of the year, topping double digits in all but the Detroit game.  A couple problems he still has is knowing when to pass or how to deal with a double team.

Of the starters, JT probably has his minutes jerked around the most.  But he made the most of the opportunities he got this week, scoring 22 and 19 in two different games, and also rebounding extremely well even when he wasn't scoring.  JT is a pretty good option to put next to DeMarcus because he won't need the ball, but he'll still be able to contribute in other ways.  One thing I would advise Paul Westphal of though: Do not let JT guard perimeter players (another reason I couldn't understand the JT at the SF experiment).  He has trouble even with PFs who can shoot the ball, as he did trying to guard guys like Andrea Bargnani and Charlie Villanueva.

He was a bit rusty against New York, but his defense on Felton was great and helped set the tone for the team as a whole.  Then against Detroit he was pretty great on offense, especially setting up teammates (11 assists).  Hopefully he keeps up on the road to recovery.

This was a good decision in my opinion, because he was getting no time in Reno (almost inexplicably too, as he wasn't getting in foul trouble in the minutes he was getting, and yet still led the D-League in Block Rate).  This way Hassan will get to practice with actual NBA players, learn the system, and learn what life in the NBA is like.  It's also good preparation for him in case we end up needing him because of a big man like Dalembert or Landry getting traded at or near the trade deadline.

Nobody has convinced me more how much we need a good quality PG than Pooh this year.  He does a great job of finding guys where they want the ball, and he is by far the best passer on the team.  Unfortunately he isn't the answer long term.

8. ARCO Arena is going to be renamed Power Balance Pavilion

Hey, if someone wants to give us the Maloofs money for naming rights and it helps alleviate some financial stress and keep them in Sacramento a bit longer, that's fine with me.

1. ARCO Arena is going to be renamed Power Balance Pavilion

Big Cuz had almost the opposite type of week Beno had.  He still was effective at times, but he only shot 37.1%, a terrible percentage for a big man of his size and skill.  He also was in foul trouble most of the week, racking up 4 or 5 fouls in 4 of the 5 games.

3. Samuel Dalembert is Frustrating to Watch

I can see now why the fans in Philadelphia always described Sammy as frustrating.  The dude can be a marvel to watch on the defensive end (see New York game), and he also has his moments on offense when he doesn't try to do too much, or comes off the pick and roll for an easy dunk.  But its the moments when he plays as if he's the main scoring option that make me want to pull my hair out.  He'll try to take it to the basket from the high post, he'll try to do fancy dribbles between his legs, and when he does it often ends in either a missed basket or a turnover, thus killing the play.  Frustrating.

Cisco's main job in the starting lineup is to be our designated sharpshooter but he was anything but in these past 5 games as he only hit more than 1 three pointer twice, and shot a combined 5-22 (22.7%) from downtown.

5. Jermaine Taylor Probably Shouldn't be Starting in the NBA

And that's ok.  He can end up being an alright player off the bench for some team, but he's a bit of a chucker and his defense also isn't that great.  He's super athletic though.

2.  Defense in Every Game but the Knicks Game

The Defense was terrible this week other than a very solid game against New York.  The Toronto and Washington games especially were atrocious.  Combined the Raptors, Wizards, Celtics and Pistons shot a combined 53.7% from the field.  That's unacceptable for an NBA team.  The league worst for Opponent FG% is given up by Toronto at 48.8%, so we're way bad.

3.  Reports that the Maloofs Were Offered an $100 Million Loan to Move to Anaheim

Things like this make me nervous, even with my confidence that the Maloofs want to stay in Sacramento above all other options.  But I'm also confident they won't stay if there is no movement on a new arena and soon.

With Tyreke out most of the week, someone needed to step up for the Kings.  That person was Beno, who showcased some of the craziest offensive efficiency I've ever seen.  Look at those shooting percentage for these last 5 games.  67.2% for a guard, mostly relying on mid-range jumpers!  That is absurd. ABSURD.  Beno also does a great job protecting the ball when he attacks the basket, leading to a lot of his layups going in when they otherwise should be blocked.  Beno's defense isn't great or even good, to be sure, but his offense is amazing sometimes, and it was more than amazing this week. Shouldn't she have started her report something like this:

"Joe emerged from his Escalade in a t-shirt hugged to his ripply chest due to the freezing early January valley temperatures. His nipples undulating as he tried to hop the curb only to fall into my waiting arms. Whereupon he whispered sweet nothings through my gorgeous 80’s revival curls and penetrating into my inner earlobe."

PW: Chenp22 didn’t put our faces in that gif.Beno: That bastard.

Against Phoenix before bumping knees with Nash

The Vfettke Would Always Win if Photoshop was Allowed Caption Winner: vfettke

"The Kings… will lose. As will your friends. Good, I can feel your anger. They are defenseless. Take your banana peel. Strike them down with all of your hatred and your journey towards the yeti will be complete!" 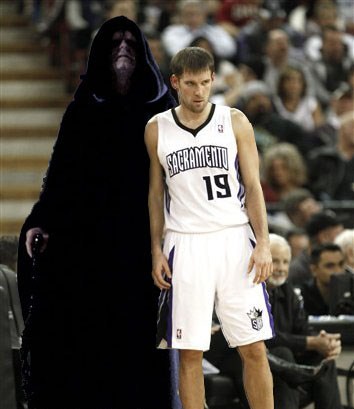 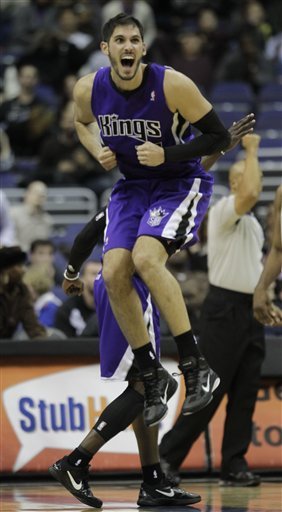 This week's caption contest winner will get a million dollars*.

Considering that Tyreke was out for three of the games on the road trip so far, do you consider this to road trip to be less of a failure?

v. Portland 1/19 W (Historically we haven't done well against Portland.  But this is POOH night! Anything goes)

@ Golden State 1/21 W (Kings are going to want payback for that epic collapse at ARCO.)

Nostradumbass Record for the Season 16 - 22