I couldn't figure out how to embed this video into my usual GBU picture, so we're just going to settle this as a replacement just this once.

A 1-2 week for the Kings, with their only win coming on a 50 foot buzzer beating three whisked into the hoop by the chariot of Apollo himself.  I'll take it!  On a side note, I've been gone for much of the past week, so if I say something inaccurate, or left out something worth mentioning, please feel free to add it in the comments.

Tyreke's miracle game-winner was just what this fanbase needed, at just the right time.  Unfortunately the good feeling didn't carry over into the Denver game, but at least for one glorious moment, it felt good to be a Kings fan again, and it renewed hope for this team in the future.

DeMarcus Cousins continued to play well this week, despite having a bad scoring night against the Clippers.  He had a career high and several big plays against the Grizzlies, and he started off really strong against the Nuggets.  He's got a lot of learning to do yet, but I continue to like what I see from him on the court... most of the time.

These are some big names too, so there is definitely some real interest in getting this thing done.  Let's hope it is so.  Make sure to like the Here We Stay group on Facebook and Twitter, we're going to try to have people at the City Council meeting discussing the Arena later this month.

Both Omri and Cisco (fresh in his new Starting SF role) played better this week than they had been the last few.  But they still continue to be inconsistent, as evidenced in the Denver game where they combined for 5-16 shooting.  I like what Westphal is doing splitting the SF minutes between Cisco and Omri (they're the two best shooters on this team and we need floor spacers), but they need to reward his trust by being reliable night in and night out, Cisco especially.  He makes way too many mental errors for a veteran.

6. JT Back From Injury

It was weird seeing JT in a suit on the sideline, because the dude simply hasn't missed many games.  He had a rough day back at the office against Randolph, but he bounced back nicely against Denver, hitting 8-9 from the field and being one of the few bright spots in that game.

We supposedly fixed this problem over the summer by trading Spencer Hawes for Samuel Dalembert, but we continue to get outrebounded regularly.  The Clippers had 14 more rebounds, The Grizzlies had almost the same as us (which is why this isn't in the Ugly column), and the Nuggets beat us by an outrageous 23.  Box your man out, and secure the rebounds.

Carl Landry continues to insist on shooting long jumpers, despite career efficiency %'s at the rim.  I don't care if you're wide open Carl, TAKE IT TO THE BASKET OR PASS.  More often than not, he misses those jumpers.  One of my biggest frustrations with this team (right behind Dalembert ISOs) is when I see Carl take a long jumper.  Its a waste of talent when he does that.

Pooh did not play well this week, missing his shots, and making more mistakes than usual.  He's a nice player, and definitely deserving of a chance in the NBA, but he's not ready to be even a backup point guard on a good team.  PG and SF are definitely positions where we are currently lacking quality NBA talent.  Beno would be one of the better backup PGs in the league, but as a starter, he pales in comparison to the rest of the NBA.  At SF, we have a couple guys who could be quality starting SFs (Greene and Casspi) in time, but right now they aren't, and the veteran (Cisco) doesn't act like a veteran half the time.

Against Marc Gasol, the Kings did swell, but against Z-Bo?  Not even close, as he terrorized whoever was guarding him, especially Jason Thompson, who picked up 5 fouls in only 15 minutes trying to guard him.  Keeping him off the offensive glass was a problem too, as he had 9 offensive rebounds.

Before the Clipper game there was a lot of speculation on whether or not Tyreke would opt to have surgery on his foot, which would've caused him to miss a substantial amount of time.  Thankfully, this now seems to be not the case.

This is by far the biggest weakness in Beno's game and the biggest reason the Kings need an upgrade at his position.  Against the Clippers for example, his defense cost us as Tyreke had to switch onto Baron Davis, who had been abusing Beno, which in turn led to the more explosive Eric Gordon getting on a role by abusing Beno.  Its not that Beno doesn't try, he just really isn't physically capable of being a great defender.  He also tends to reach too much, leading to a bunch of silly fouls/And-1s.

3. Donté Greene: From DNPs to Starter and Back Again

No player on this roster can be as frustrated with his role than Donté, and understandably so.  It's one thing to not play a player as much once he's started most of the games, but to not play him at all cannot be good for his confidence.

It's true the Kings could save some cash trading for Yao, but it wouldn't win them any games.  I'm glad that its been reported the Kings aren't interested, but all I have to say is that last year I myself was making fun of numerous fanposts saying the Kings should trade Kevin Martin for Tracy McGrady.

Although he reverted a bit back to "NaTyreke" in the Denver game, this was still by far Tyreke's best week this season, as he nearly won the game against the Clippers, putting up some great numbers on the way, and really winning the game against the Grizzlies, essentially twice, with his steal and dunk to give the Kings their first lead late, as well as "The Shot" moments after Mayo had given the Grizzlies the lead back.  Most impressive to me has been Evans improvement on the defensive end, an area where I thought he showed little effort in at the end of last year and the beginning of this one, but these last few weeks especially it seems like he's been picking it up on that end.  Hopefully the Denver game isn't the start of another slump, but a mere bump in the road to recovery for our young star. Everyone who posted in this thread is the Winner.

It never gets old and I know you're going to watch it again even though its posted above.

Geoff Petrie showing Mario Elie how to whistle for a cab, Princeton style.

As The Warriors’ Reggie Williams shoots free throws late in a game in Sacramento, Kings’ GM Geoff Petrie taunts him with a "lip pinch" taunt. Petrie was later fined by the team and was sent to bed without his supper. 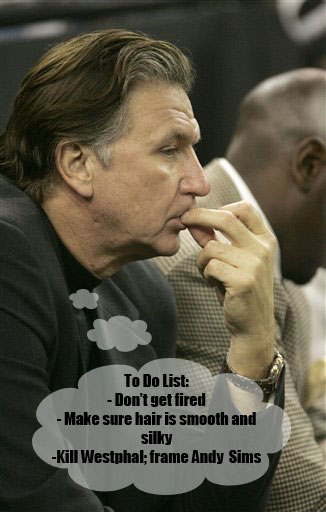 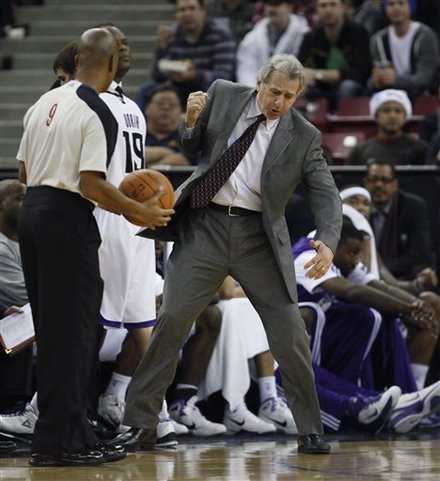 This week's caption contest winner will have to participate in a halfcourt shooting contest with Tyreke, with the loser having to hang out with Peaches for a week.

Tyreke Evans hit one of the greatest game-winners we have ever seen this week.  What is your favorite Kings game-winner?

Mine, and I think this is one that is shared by quite a few Kings fans, is th Mike Bibby game winner in Game 5 of the 2002 Western Conference Finals.