Warning: This is not one of my cheerier weekly recaps.  Proceed with caution.

When Sammy doesn't try to force the situation on offense, he's decent.  He's great on the other side of a pick and roll (something the Kings need to run more), and he's great at crashing the offensive glass and mopping up.  He's also a decent passer.  His defense is almost always excellent, but its his offense that makes me want to tear my hair out.  Its good to see him play within his limitations every once in a while.

We beat each team we played in rebounds, including the Hawks by a huge margin (17 offensive boards in that game). Yay? Yay.

4.  Donté Played His Heart Out

It can't be easy to go all the way from not playing to then being asked to start again, but I think Donté handled it well.  He played solid defense and shot the ball well everywhere but from three.  Unfortunately that's the problem with him.  He needs to be a good shooter to fit in with our main guys, to help spread the floor, and right now he isn't.  He's pretty bad actually.  It's surprising considering how well he shot last year, but a summer of bulking up and not working on your shot can lead to some regression unfortunately.

Another week with Carl shooting less jumpers.  I'm loving it.  He can hit them, but he needs to take advantage of how good he is inside.

Omri has been hitting the glass hard as of late, notching 23 rebounds in the last 3 games (20 in the last two).  He does need to be more consistent in his shot though.  It seems as if he shoots more when he's not making his threes too, which is a bit Nocionish.

We did not get enough for Kevin, a near All Star level player.  You don't dump those kind of players for cap space and guys who will be unrestricted free agents.  Now it looks like the most we will be able to get for Carl is cap space and a pick, which is at least something.  But we likely could've gotten more picks and cash by getting a better deal for Kevin.  This one's on Geoff.

As good as Beno's offense has been, his defense has been equally bad.  I don't know how many times I've said this, but it is not for lack of effort, he just simply can't keep up with guys on that end.  But it costs us a lot of points, especially against Golden State, where he was asked to guard Curry, who ended up with 34 points.

The Kings did not shoot above 68.2% on Free Throws in any game this week, while opponents never shot less than 85%.  That's a huge difference, a game changing difference.  I don't know what can be done to change it, but its an area of worry.

11 turnovers in the last two games for Tyreke, with most of them being down the stretch.  That's way too many.  Then there are the plays that aren't turnovers, but are equally as bad, such as coming out of a timeout where you need a basket, and dribbling for 5 seconds before launching a contested three pointer.  Tyreke has the potential to become one of the top players in the game, but he needs a mentor, and that's why I think the Kings need to go out and get a guy like Chauncey Billups (not necessarily Chauncey Billups) who can become that mentor.

5.  DeMarcus Cousins Needs to let the Game Come to Him

From the half a season I've seen of DMC, its clear that he can let his emotion take over his game.  Sometimes this can be good, when he's going against inferior opposition, but most of the time its not.  He's like a Superhero just discovering his powers, but doesn't understand fully how to use them yet.  This is a learning process for him, and the fact that he had two 20 point games this week and I don't think he did all that well says a lot about how good this guy can be.

Each game this week featured a late game collapse, each worst than the last in my opinion.  Against Atlanta we held a 9 point lead going into the 4th and lost it and more during a 13-0 run by the Hawks over a period of almost 3 minutes.  Then against Portland we held a 7 point lead and let them go on an 11-2 run over SIX minutes.  2 points in 6 minutes, its a wonder we even got into OT in that game.  Then the Warriors game.  I don't even want to talk about that.  One of these days inexperience is going to have to stop being an excuse, especially when the team continuously puts themselves in this type of situation.

2.  Francisco Garcia Out for a While

Cisco re-injured his calf this week and that really hurts us.  Not having Cisco means we can't spread the floor as easily.  Omri can take his spot, but Francisco is much better in the mid-range and on defense, and now we also lack the luxury of being able to put Cisco and Omri in at the same time.

Against Atlanta we had .6 seconds to hit a shot.  An alley-oop attempt makes sense there, but what didn't make sense was having DeMarcus throw the pass, or having Tyreke attempt the lay-in (he's not exactly a big leaper).  Tyreke actually got free, but the pass was waaaay off and sailed into the third row, nowhere near the basket.  Then against Golden State, the Kings had .9 seconds to simply score, since it was tied.  I would've gone for a catch and shoot here, but again the alley-oop was attempted and again it failed.  Hopefully this play gets crossed out from Westphal's playbook for future reference.

Overtime has not been the Kings friend this year, as they have yet to win a game in extra time.

I did not get a good vibe from Ailene's piece the last week on Hassan.  If you're a loyal reader of StR, you know I think Hassan is a great talent.  But there have been a lot of superb talents that haven't panned out simply because of a lack of passion and hard work.  You can only rely on your physical gifts to get you so far, the rest is up to you.  Another reason the Kings could use some veterans on the squad.

What I don't like about this is the fact that they have picked someone who hasn't made an actual proposal, but is simply requesting 90 days to analyze the situation and then make a proposal. Or not.  It's extremely frustrating.  I hope it works out, but if Taylor can't come up with something (and he's been on the record as saying Public Funding will definitely be needed, something that hasn't gone over well with the City of Sacramento before), I'm afraid the Kings will move within the next year or two.  This is our last chance. Don't eff it up.

To be honest, nobody probably deserves Player of the Week this week, but I'm going to give it to JT for being the most consistent (consistently good that is, there were several players who were consistently bad).  Other than a knack for whining on literally every single whistle blown by the referees, JT is a consummate professional.  He doesn't whine about playing time and he doesn't force too much.  His rebounding is excellent, especially on the offensive end, and he's also a decent passer, which helps our offense.  He still can improve in the post (which is less of a worry for me, since that's DeMarcus's area) and as a defender, but I always appreciate Jason's effort.

Kings keep hurting themselves the way they're running the offense

You know you've got a problem when a 90-year-old man is calling you out on your stamina.

AnotherStupidSN Caption: Sacramento Kings Forward Omri Casspi reacts upon hearing of Arco Arena’s upcoming name change. When asked later about his surprising reaction, Casspi said "I’m stoked, man, those things are delicious. I’m a huge fan. With the discount they’ll be giving us, I’ll probably gain twenty pounds." When a reporter informed Casspi that the new name is "Power Balance Pavilion" and not "Power Bar Pavilion", the Forward’s reaction was much more subdued.

Omri Casspi is whistled for a technical for using a jetpack on the court. David Stern issued a stern warning to the league reminding everyone that jetpacks are a violation of the NBA’s uniform policy.

Alternate caption: Screw you, vfettke. You’re not the only one with photoshop. 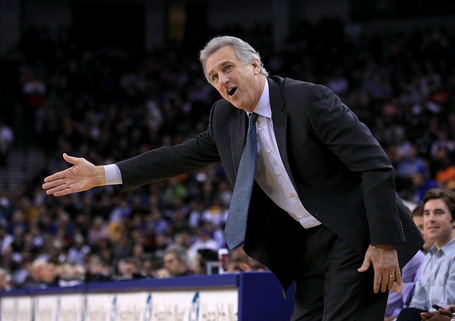 This week's caption contest winner will have the memory of both Warriors games from this season erased from their brain for eternity.  Ignorance is Bliss.

The trade deadline is coming up.  Disregarding the expiring contracts, do you see anyone else on the team being traded?  If so, who?

v. Charlotte 1/25 W (Sports 1140 has been broadcasting this as Latino Fan Night because of Edu*rdo N*jera.  This means war.)

Nostradumbass Record for the Season 17 - 24