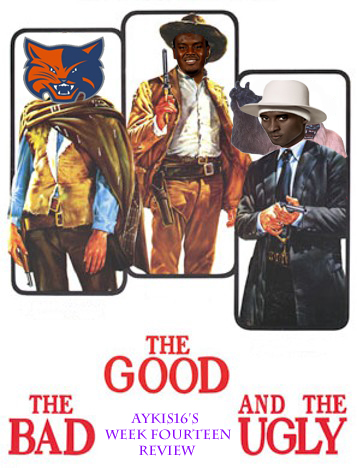 A loss to the Kings isn't the only thing Kobe didn't expect...

Wow what a difference a good week makes!  The Kings won 3 of 4 games this week, and the 3 wins came against the Blazers, Lakers and Hornets.  That's impressive stuff.

Slowly but surely the Kings have started to really improve their defense as a team.  The highest FG% they gave up was in the lone loss to the Bobcats at 45.1%, and they held each team under 100, with the Hornets scoring the most at 96.  The Kings have now brought themselves to middle of the pack (16th) defensively, a performance not seen since 2005-06 when the Kings finished the season with the 12th best defensive rating.

52 points, 22 rebounds, 9 assists, 4 steals and 2 blocks combined in two nights against two of the top teams in the league.  As a 20 year old rookie.  Andrew Bynum and Emeka Okafor are both known primarily as defensive stalwarts too, which make this even more impressive to me.  Its not just his offense though as Cousins has been rotating well and also using his size and length to play solid defense.  Every night I see him do something else that amazes me.  I'd like to once again thank the Sixers, Nets and Timberwolves for passing on this guy at draft night.  One man's red flag is another man's treasure.

3.  Omri Casspi Solidifying his Grip on the Starting SF Spot

With Francisco Garcia out due to a calf injury, Omri has been making the most of it.  He's hitting the glass hard, scoring when needed, and doing a lot of little things well.  His off-the-ball movement is probably the best on the team, and its a bit sad to watch sometimes how hard he works to get wide open and then doesn't get the ball.  Another thing he's been doing well that James mentioned at the Hornets game is the good job he's been doing getting the ball into the post.  The biggest improvement in Omri's game, and why I think he'll remain the starter when Cisco comes back has been his defense, especially in the last two games.  Omri was assigned Kobe Bryant in the 2nd half of the Lakers game and while he didn't shut him down, he still managed to make life tough for the former MVP and force him into some bad shots.  He did the same against New Orleans as well, coming up huge on Marco Belinelli late in the game.

4.  Kings Offense in the Wins

In all three games the Kings won this week, they shot 50% or above.  That's a sign of better spacing, more ball movement, and reading the defense better.  Experience if you will.

Top Hat has quietly reverted back to his old self coming off the bench, putting up double digits in three of the four games this week, and being an absolute terror on the offensive glass.  His defensive rebounding is still terrible, but I'll take this Carl 100 times out of 100 compared to the one that settled for jump shots every time down the floor early in the season.

At long last it seems we have our old Tyreke Evans back.  Yes this version still isn't perfect (like using 22 of 24 seconds on the shotclock without giving the ball up in crunch time against the Hornets and then missing a jumper), but its much, much better than the hobbled one we saw for the first two months of the year.  His jump shot is looking a lot better lately too, and its opening up other areas of his game too.

Twice this week Pooh played in familiar territory, and twice he came back victorious.  Pooh went to college in Portland, and he helped lead a nice run against them in the Rose Garden.  A few nights later he had his High School jersey retired in LA and also upset the hometown team.  What a great week this must have been for him.  I love rooting for Pooh, he's living proof that hard work and dedication will allow you to accomplish your goals.

I have to give props to Luther for how he performed when he came in against New Orleans.  He has barely played at all for a while, and to come in and to put in some good work in limited minutes off the bench was much appreciated.  I know we all cringed when he pulled up for that transition three, but it went in, and it seemed to help his confidence a lot.

9.  Beno Udrih Contributing in Other Areas

Beno had the scoring load lessened on him this week with the re-emergence of both Tyreke and DeMarcus, but he still managed to help out in other ways, dishing out assists, starting fastbreaks on his own rebounds, and putting in a lot of effort defensively.  Beno could probably score 20 a night if you needed him too, but you also probably won't win many games if thats the case.  It's better for him and the team if he can simply excel in a more limited role, as evidenced by the Kings winning 3 of 4 this week.

In what was seemingly going to be a formal approval process of David Taylor's "plan" at the January 25th City Council meeting was instead another delay in the process until two weeks from now.  I kind of like this because I wasn't happy they were going to approve the one guy without a plan, but I also don't like it because yet again this thing is getting delayed.  I want a new arena, I don't care where it is (scratch that, yes I do, in Sacramento), and I want it 5 years ago.  Please get this done. Please.  I'll sign a check right now as my contribution.

Tyreke got into foul trouble in the last three games, getting 5 against both Charlotte and New Orleans, and while he only got 4 against the Lakers, 3 of those came early.  He keeps getting called for little ticky-tack things too which is annoying, especially considering he's probably our best perimeter defender.

JT stepped on Trevor Ariza's foot near the end of the first half against New Orleans and didn't play at all in the 2nd half.  He is wearing a walking boot and is listed as day-to-day.  JT is a warrior, but lets hope he's alright.

First off, kudos to Ailene for admitting she misquoted Carl Landry the other day, but that doesn't change the fact that she did indeed misquote him.  This brings into question how many other times has she possibly misquoted people and simply not been called on it?

This was possibly the most boring and least entertaining games I have ever watched.  I'm glad I was able to watch it on DVR and not live, because I feel truly bad for anyone who had to watch it live, and think anyone who actually went to the game should get a full refund.  There was just no flow or rhythm to the game, and it had a lot to do with the referees blowing their whistle during every instance of contact.  59 fouls in a 48 minute game, with Sacramento shooting only 36% to Charlotte's 45%.  As a referee you have to let some things go or you ruin the product itself.  But they set the tone early that everything was going to be called (both teams in the penalty in the first 4 minutes of the game? Seriously?) and they stuck to it.  At least they were consistently awful.

2.  Donté Greene is Kind of Blowing his Chance

With the calf injury to Francisco Garcia, Donté has gotten some playing time as of late, but he's not really capitalizing.  His three point shot has all but abandoned him this season (he only hit 1 of 6) and unfortunately for him, needing our wings to hit threes when they're open is kind of essential to our offense.  Also he got scorched by Kobe Bryant on both ends of the court, which isn't too bad, since its Kobe Bryant, but still.  When you're put in the game for defensive purposes, it looks bad when the guy puts up 21 first quarter points on you, including 4 off steals for breakaway dunks from guarding you.  His effort is there, but its not producing tangible results.

Sam definitely played his best week as a King.  He was instrumental in each of Sacramento's three victories this week.  In Portland it was his defense on LaMarcus Aldridge that was the game changer.  Aldridge had just been named Western Conference Player of the Week, and Dalembert helped hold him to just 9 points on 4-14 from the field.  Against the Lakers, he went bonkers offensively, scoring a season-high 18 points on a variety of cringe-inducing fadeaways that somehow went in each time.  Finally against the Hornets he had huge plays on both end of the court, scoring 16 points, including a crucial tip in late in the game, as well as a huge block on what should have been an easy layup for Chris Paul.  Sammy looks like he is a lot more comfortable out there now, especially during the times he's paired up with DeMarcus Cousins.  I know I've given Sammy a lot of grief this season, but he was absolutely phenomenal this week and we wouldn't have won these games without him.

Comment of the Week:  (Yes its an image and chenp22 already won that, but dammit, this is too good not to be up here)

PW: Come on, try to push my arm down. This Power Balance bracelet is supposed to make it impossible to tip me over.

Exhibit G: Hassan Whiteside, come on down, you’re the next contestant on The Line-Up Is Wrong!!!

The Vfettke Would (Almost) Always Win if Photoshop was Allowed Caption Winner:  chenp22 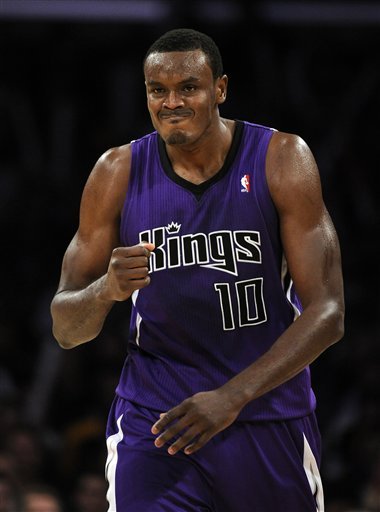 This week's caption contest winner gets to vote for who he wants to compete in the Taco Bell Skills Challenge at the All-Star Break! It's a special privilege.

Honestly, I just want to see the team win, and think we'll still do enough losing the rest of the season that 10 more wins wouldn't change our chances in the lottery too much.  Besides, screw the ping-pong balls.  They don't like us anyway.

v. Boston 2/1 W (Hey we beat the Lakers at their place, now we can beat their rivals at ours)