Share All sharing options for: Kings' Defense Improving (On Paper)

The Kings lost all those games during that awful 2-22 stretch because of a bad offense and a bad defense. The team is winning again ... well, the team has won three of its past six games. Progress. But the progress hasn't come on offense, where the Kings still rate No. 25 in the league. But the defense had made moves, and now ranks No. 19 in the league. Progress!

But when did the defensive resurgence begin? 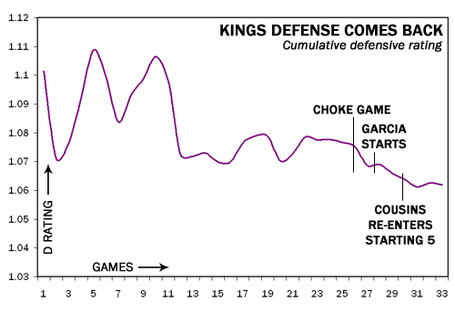 Right around the time DeMarcus Cousins was benched for the choke signal toward Reggie Williams, oddly enough. But since Cousins has re-entered the starting line-up (joining new addition Francisco Garcia there), Sacramento's defense has maintained. You can't really credit Garcia because the defense improved when Samuel Dalembert replaced Cousins a few games prior, but you can't credit Dalembert because Cousins is holding it down.

I say we credit Chuck Person.