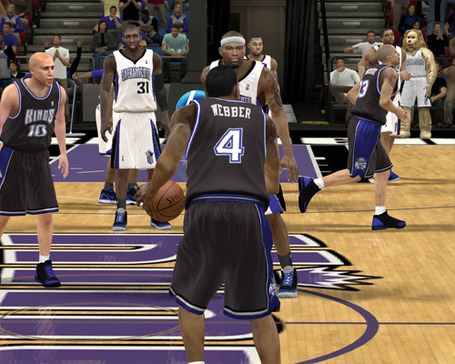 This would be one hell of an exhibition game

Last week, 2K Sports released their latest iteration of their yearly basketball series, NBA 2K12.  With no end to the lockout in sight, 2K12 is easily one of the best ways to get your basketball fix, particularly if you're a Kings fan.  This year, 2K has released several classic teams, including the best team in Sacramento Kings history, the 2002 team starring Chris Webber and co.  You can also play as a young Mitch Richmond, although he's on the 1991 Run TMC Warriors.

I've spent a good portion of the week playing the game, and I have to say it's been very fun so far.  After the jump, a Kings-heavy review, as well as screenshots from the game.

While last year's 2K11 was one of the best basketball simulations to date, 2K12 steps it up another notch, particularly with the additions of so many classic teams.  Last year's edition focused on the G.O.A.T., Michael Jordan, allowing you to play in several great moments from his career and eventually draft him to your own team.  This year expands the retro feel to include more than 30 classic teams from NBA history, allowing you to play as guys like Magic Johnson, Larry Bird and more.

2K is all about the detail, so each classic game is presented as a telecast from that time period, and the rules are the same as well.  So that means when you go to play as Bill Russell's Celtics v. Jerry West's Lakers in a 1965 game, the game plays it in a grainy black and white, with no three-point line and jump balls every quarter.  It's really neat.

The 2002 Kings team and the 1991 Warriors are not unlocked the same way as these other teams.  They are unlocked through the use of a code that comes with your game if you get the XBox 360 or PS3 version.

The 2002 Kings roster is incredibly fun to play as and is one of the best offensive teams in the game.  The full roster in the game is Vlade Divac, Chris Webber, Peja Stojakovic, Doug Christie, Mike Bibby, Bobby Jackson, Scot Pollard, Hedo Turkoglu, Gerald Wallace and Lawrence Funderburke.  There are also two computer generated roster filler characters to give the team an even 12.  No love for Jabari Smith or Mateen Cleaves.

When you play as the 2002 Kings as the home team, the court also becomes the classic ARCO Arena floor, although the floor says "Kings Arena" (I guess ARCO didn't want to pay for the rights).

The likenesses for all the players are very good, except perhaps for Scot Pollard. Pictures of the 2002 Kings: 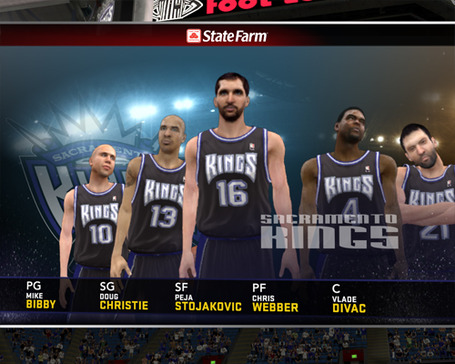 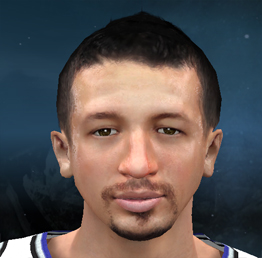 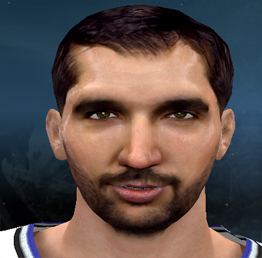 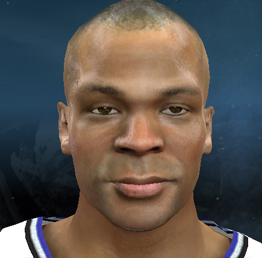 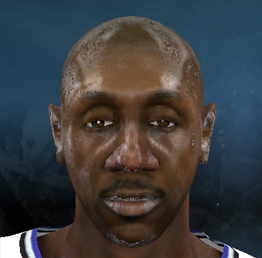 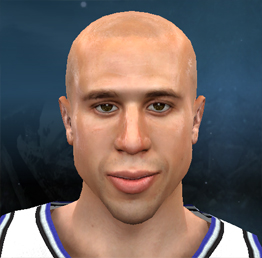 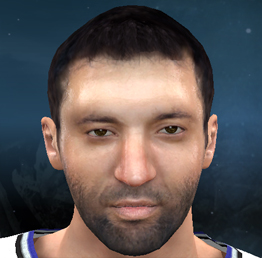 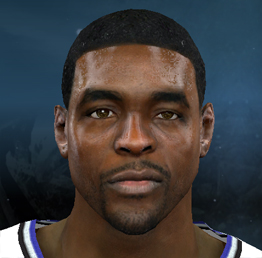 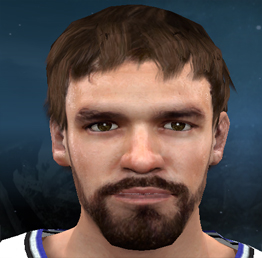 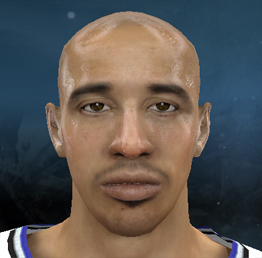 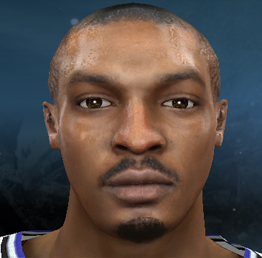 Another fantastic game mode that 2K has been known for is the My Player mode, where you create a player and play as that player throughout his career.  This year has seen some new adjustments to how you get drafted, setting you up in a single exhibition game and then having pre-draft interviews.  The questions and answers you select are very nuanced.  In my game, I was interviewed by Sacramento, Detroit and Milwaukee.  When the Sacramento representative interviewed me, one of his questions was about how Sacramento isn't as big as a Los Angeles or New York, and just asking me whether Sacramento would be somewhere I'm interested in playing.  Obviously I selected the "Yes" answer, but was happily surprised when my player's more detailed answer included "I know there's a rabid fan base in Sactown and I'd love to play there".

Unfortunately I wasn't drafted by the Kings, but not to worry: 2K also added a new game mode this year similar to My Player called "Create a Legend" where you can take a single player from the NBA and play his career, much like the My Player mode.  I'm gonna take Hassan Whiteside to the top!

Association mode has been a staple of the franchise for a while and probably the mode I spend the most time in.  In this mode you are essentially the GM, the coach, and the players.  You control everything, from trades, to hiring coaches and developing talent, to the individual players and the plays called in the games, and much more.

The 2012 Kings roster in the game is currently accurate as of July 1st and does not include any of the rookies, due to the lockout.  In fact, the only rookies in the game are Ricky Rubio and Robert Vaden.  This didn't stop me from creating "Swimmer Baguette" and putting him on the Kings roster though: 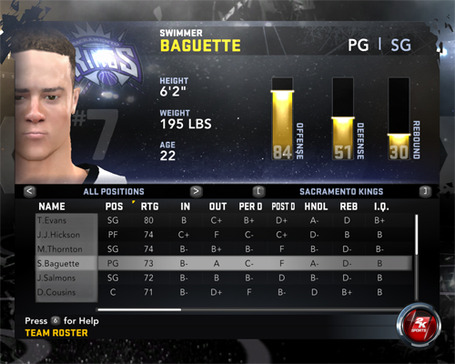 Skyler Funnybutt is next up

Here's some pictures of the roster: 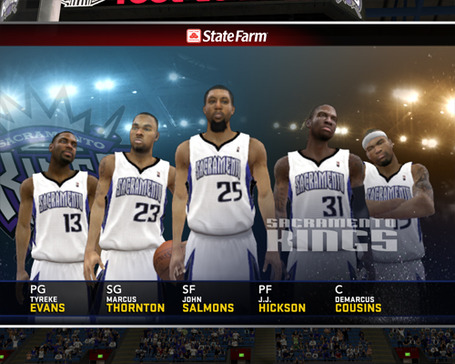 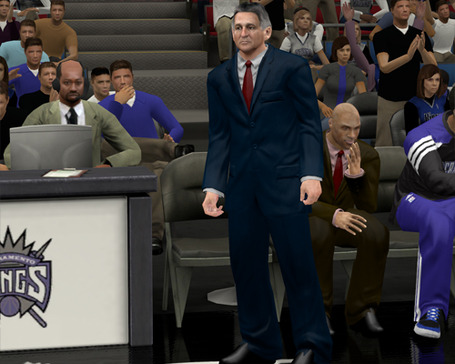 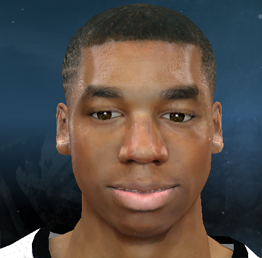 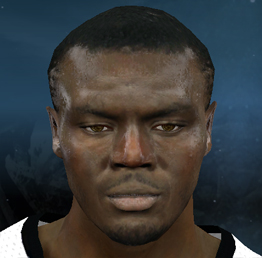 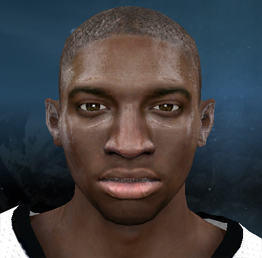 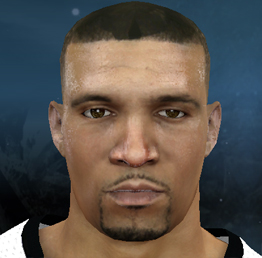 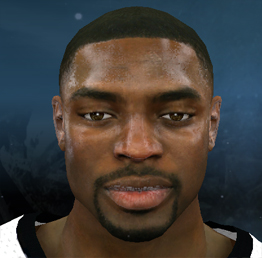 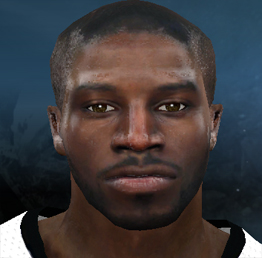 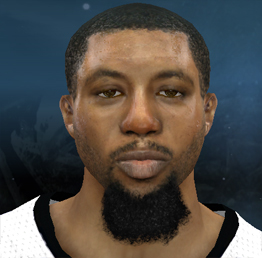 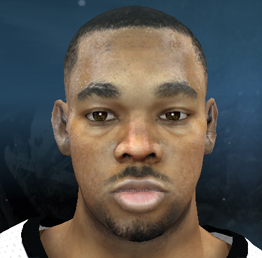 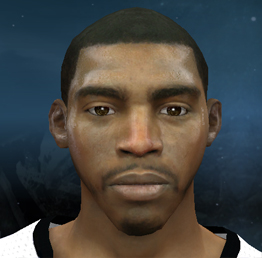 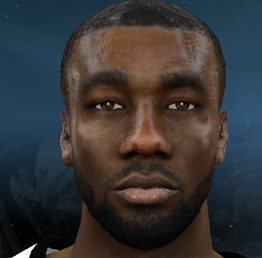 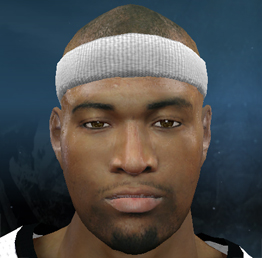 Every team also has a bunch of jerseys you can choose to wear in the game.  The Kings have the Baby Blue, the Gold Lamé, the Royals jerseys from last year, the Artest-era Purple and Whites, the Webber-era Black and Whites, and the new alternate Black jerseys from this year.  These new Black jerseys look really nice, and I am already considering buying one when they do come out for sale. 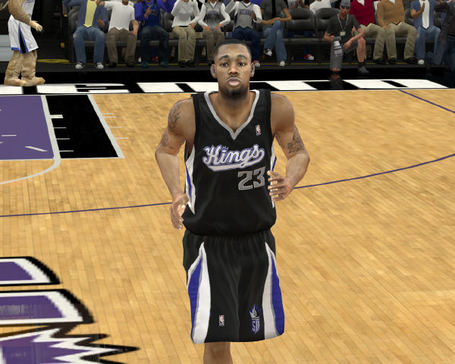 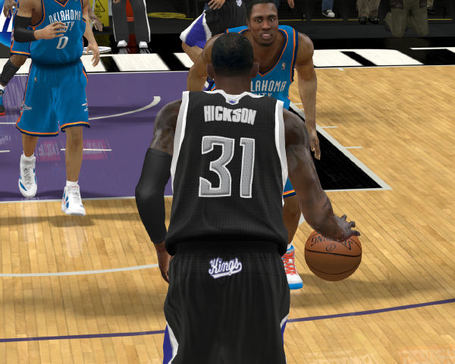 All in all, the game has been very fun so far, and if you're already considering buying it, I'd definitely recommend it.  Until the lockout ends, it'll be the only Kings basketball we get. 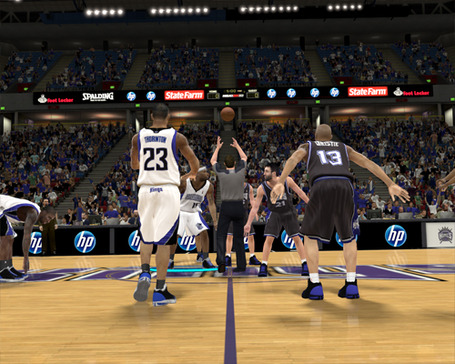