Share All sharing options for: Peja Stojakovic, Forever a King 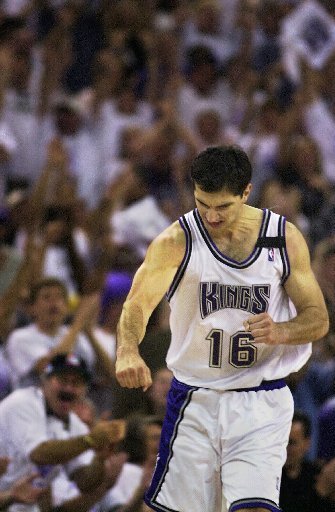 Peja Stojakovic announced today that he was retiring from the NBA at the age of 34 after 13 seasons in the NBA and finally winning an NBA championship this past summer with the Dallas Mavericks.

Peja Stojakovic is my favorite Sacramento King of All-Time. It was Peja and his shooting that spurred me to become a Kings fanatic. I'd spend hours outside shooting as far away from my hoop as I could. At recess, I'd infuriate my friends by camping at the three point line and jacking it up every time I had it (so I guess I was more like Andres Nocioni than Peja).

Peja did more than just shoot the ball though. At his best, he could do a little bit of everything, rebound, pass, and defend (the "Dirk Stopper"!). He was amazing using cuts and screens to get open off the ball, and whoever was assigned to guard him knew they'd be in for a tough night. His 2003-04 campaign, where he finally became the primary focus of the offense thanks to an injury to Chris Webber, ranks as one of the best performances by a Sacramento King ever, and he ended up finishing 4th in MVP voting.

Injuries derailed his career. The problems began near the end of his tenure in Sacramento and really intensified in New Orleans. Peja was downgraded to a mere spot up shooter. He should have been so much more, a perennial All-Star candidate. Healthy, he would have challenged Ray Allen for that All-Time 3 Point Record. As it ends up, he's 4th.

Nobody else has ever worn the #16 in Sacramento Kings history. Nobody else should. Peja belongs in the rafters with Vlade and Chris, because he was just as important to this team and this city.