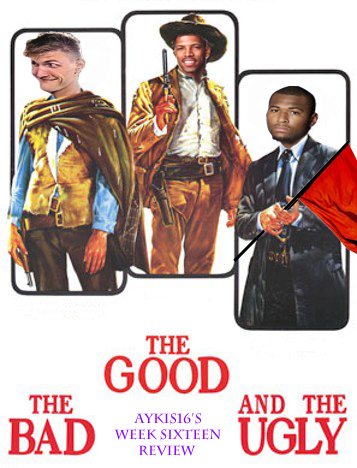 Three tough opponents, three tough losses, by a combined total of just 7 points.  This team continues to frustrate with its inability to win close games.

1. DeMarcus Cousins Has Become a Beast on the Court

2. Tyreke Evans is Consistent Once More

Sure, Tyreke's execution late in games this week hasn't been the best, and neither have the turnovers.  But what he's accomplished aside from that has been awesome.  21 points on 56.3% shooting against Utah.  One assist away from a triple-double against Dallas.  30 points on 50% shooting and 9 boards, 4 assists against Dallas.  Tyreke is putting up star numbers as of late, and has once again become consistent.  Its hard to remember how young this guy is sometime, when he's already so good.  The one thing he still isn't consistent enough with is his three point shot, as he shot 0-8 from downtown this week.  Just one of those threes falling down each game would have won two games and sent the other one to overtime based on final scores.  Here's hoping he makes a third year leap from stud to star like Kevin Durant and Derrick Rose have.

After reviewing David Taylor and the ICON group's portfolio, I have to say I'm pretty impressed.  This seems like a last hope, but based on their credentials, if they can't figure out a way to get an arena built in Sacramento, nobody can.  I applaud Mayor Johnson for being proactive on this issue, and I applaud the City Council for being unanimous in their decision, something that rarely happens.  Now I hope that when the 90 day process is up, the Taylor/ICON group will be able to come back with a definitive plan for getting an arena built.

I cringe every time Samuel Dalembert shoots the ball.  He has an ugly shot.  He is 7'0 tall and shouldn't be shooting fadeaway jumpers.  But in a week like this, he was hitting them.  I don't know if that's a good thing though, as it just seems to encourage him to shoot them more often.

Luther has done a great job all year of coming in and playing limited minutes.  Its when he's asked to play a heavy role that he's struggled.  But against Utah and Dallas, he did a good job on both ends of the court in my opinion, hitting his shots and providing good effort.

Another week of dominating the boards for Sacramento, snagging at least 45 in each game and limiting the opposing team to under 40 each time.  The Kings get a lot of offensive rebounds, second in the league in fact, and they're first in second chance points.

7. Jason Thompson Near the Basket

JT came back from injury this week and did an alright job.  One thing I noticed is that he seems to be using a softer touch around the basket as of late.  Previously he would annoy me when he would throw the ball at the basket like he was trying to break it.

Donté didn't ever play more than 13 minutes in any game this week, but he was decent whenever he was in.  I think he'd be the starter still if he could knock down the three with any consistency, simply because his defense is better than Omri's at the moment.  Unfortunately for Donté, Omri's defense is improving (nobody told Kevin Durant though), he's a better rebounder, and he's already a much better three point shooter.

To me, the Utah loss was far more disappointing simply because Sacramento had the lead most of the game and let it slip away at the end.  Dallas was more of the same as the Kings started off well and then failed to execute.  The difference came when both the Jazz and Mavericks switched to a zone defense.  The Kings couldn't handle it all.  It didn't help that against Utah they made several lazy passes in the vicinity of Andrei Kirilenko during crunch time that led to fastbreak opportunities for Utah.  The Kings did better at figuring out Dallas' zone, but unfortunately couldn't stop them from scoring on the other end.

Against Utah:  Give Omri Casspi the ball, slips in his hands, he throws up worst missed three pointer of his career.  Kings lose.

Against Dallas: 1-4 Flat for Tyreke Evans, he drives to the basket straight into Tyson Chandler, throws up a prayer hoping for the foul, doesn't get it.  Kings lose.

Against Oklahoma City: Inbounds play, Tyreke gets it, shoots a three for the win from the top of the key, misses.  Kings lose.

Other than against Dallas, the Kings had far too many turnovers.  18 against the Thunder and 20 against the Jazz.  Those turnovers were the biggest reasons the Kings lost the game, and you can even point to specific instances as well.  For example, the Kings lost by two to the Thunder, yet right before halftime committed a turnover on a 24 second violation.  Eric Maynor then hit a halfcourt buzzer beater as time expired.  Tyreke was by far the biggest culprit with a combined 12 turnovers in both those games (6 in each).

Aside from the Utah game (where he only hit his threes), Omri has been having an opposite week of sorts, hitting his inside and mid-range shots but not the ones from distance (he went a combined 1-7 from three against Dallas and OKC).  Unfortunately, we need Omri to be able to hit the three at least at a 40% clip.  We're one of the worst three point shooting teams in the league, and with Cisco out, Omri is our only reliable shooter from outside.  I know I rag on him for not being able to hit anything but threes, but hitting threes consistently is still darn useful.

5. Beno Didn't Get the Ball Enough

Jerry Reynolds is right.  The Kings need to get Beno the ball more, and let him take more shots, especially when the offense is struggling.  Beno is the most consistent shooter the Kings have, especially in the mid-range, and yet he only shot about 8 times a game in each game this week.  His average is at 10.3 so that's not a whole lot different, but the Kings would do well to defer to Beno when they're struggling.

This is less bad, than it is simply sad.  The signs came down at ARCO this week, and starting in March the new Power Balance name will be visible from I-5.  I likely will still call it ARCO, as will many Kings fans.  Here's hoping section214 wins one of the letters and that Mrs. section214 lets him keep it.

1. DeMarcus Cousins is Still a Beast Off the Court

You've heard by now of the incident after the game in which DeMarcus confronted Tyreke and Donté about the final play against OKC.  The problem is that he might have been right, but he went about it in the wrong way.  Now he might be suspended and lost a little respect from his teammates.  Its disappointing, especially with how well he's been playing as of late.  That anger, that passion needs to be bottled up and used in a productive manner.

I don't think Pooh has had a more ineffective week in the NBA.  He's supposed to be a sparkplug, but he didn't provide much of anything this week.  He was a liability on both ends of the court, getting burned by opposing backups Earl Watson, Jose Barea, and Eric Maynor, and only scoring 5 points on 9 shots.

JT is a good passer for a big man, but only when he's swinging the ball on the perimeter.  When he tries to get it down low, he's not very good.  He turned it over on more than one occasion this week by throwing the ball too high or too far from the intended recipient.  He needs to look at how Omri does it, with the swing around the defender and a low bounce pass.

Yes, this is a little controversial, especially given the fact that he's likely suspended for at least the next game and maybe the two games after that.  But he had a great week on the court as well.  He's learned a lot (again, on the court) when it comes to patience and knowing when to get his shot.  He's more comfortable than anyone else on the team when it comes to dealing with double teams and passing out of them, and he's quickly becoming a go-to force in the paint.  What I liked best about him is he's learning to get to the foul line, and getting there often.  It helps that he has hit them too.  I hope DeMarcus figures out the off the court stuff too, as his presence will be sorely missed if the reports are indeed true that he was suspended.

Comment of the Week: (Another image, so sue me, its hilarious)

If the King had won, I would have posted this, But since we have an excuse to post GIFs, what the hell 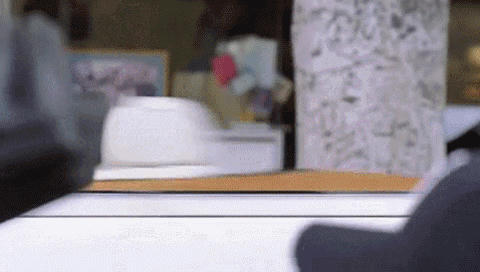 "I know General relativity is a theory of gravitation developed by Einstein in the years 1907–1915. The development of general relativity began with the equivalence principle, under which the states of accelerated motion and being at rest in a gravitational field (for example when standing on the surface of the Earth) are physically identical. The upshot of this is that free fall is inertial motion; an object in free fall is falling because that is how objects move when there is no force being exerted on them, instead of this being due to the force of gravity as is the case in classical mechanics. This is incompatible with classical mechanics and special relativity because in those theories inertially moving objects cannot accelerate with respect to each other, but objects in free fall do so. To resolve this difficulty Einstein first proposed that spacetime is curved. In 1915, he devised the Einstein field equations which relate the curvature of spacetime with the mass, energy, and momentum within it……Oh, time to get back to work."

Chuck Peterson (white shirt) protests that the halfcourt shot that a fan just hit should be negated for having a toe on the line, while DeMarcus Cousins envisions himself behind the wheel of a brand new Ford Festiva. The moment is lost on Urijah Faber (far left), who silently reminisces about Kayte Christensen.

The Vfettke Would (Almost) Always Win if Photoshop was Allowed Caption Winner: wallywagon11

This Week's Picture: (There weren't many good options this week, so sorry in advance.  Feel free to instead make a NBA Player Flowchart of one of our Kings players, past or present as an alternate option). 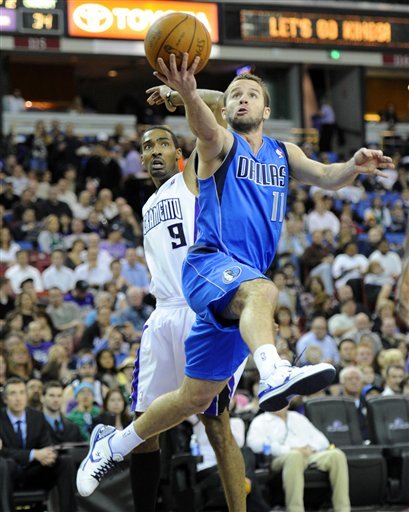 This week's caption contest winner gets to fight ed_m7 to the death for sole possession of a sweaty DeMarcus Cousins headband.  Watch out though, he's a Master of Peruvian Ninjitsu, a martial art entirely based off fighting with sweaty headbands.

Valentines Day is tomorrow.  What do/did you love most about the Kings?

For me it goes back to my dad taking me to the games when I was little, a tradition I one day hope to continue on with a future son (or daughter).  Those are memories that last you a lifetime.

Nostradumbass Record for the Season 19 - 31