DeMarcus Cousins was pulled off the Kings' team plane to Phoenix and suspended for the team's Sunday game against the Suns, reports FanHouse's Sam Amick, because of an altercation between Cousins and Donte Greene in the locker room following Saturday night's loss to the Oklahoma City Thunder. Cousins was angry Greene inbounded the ball to Tyreke Evans on the Kings' final possession with Sacramento down two. Cousins thought he was open, and Evans missed a three-pointer that would have won the game. Cousins started chirping at Evans and Greene as they all left the floor; in the locker room, words allegedly turned into fists.

Cousins and Greene were separated, reports Amick, but once the team made its way to Sacramento International Airport and loaded up on the team charter, an absent Geoff Petrie made the call to pull Cousins off the plane. (Petrie is off scouting.) Amick reports that Cousins could either be shipped to Phoenix before Sunday's 5 PM Pacific start, or that he could miss the entire three-game road trip heading into All-Star Weekend. The Kings play at Oklahoma City on Tuesday and at Dallas on Wednesday.

Cousins was also upset about a non-call on Nick Collison on the rebound opportunity on Evans' miss. Cousins, in his post-game comments, said he was "clearly fouled" about 14 times, which means his agent will be hearing from Stu Jackson in short order.

Was Cousins open on the final inbounds play? A few looks after the jump.

This is what Donte Greene is looking at. 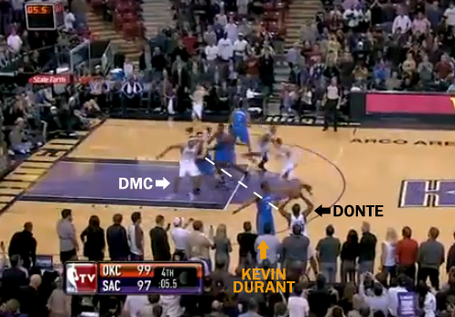 Cousins basically has his right arm free and plenty of space to get a post move on the left baseline. But Collison is all over Cousins' left arm, and Kevin Durant is positioned specifically to take away the post entry. In getting the ball to Cousins, Greene would be flirting with a Durant deflection and a Collison deflection. Instead ... 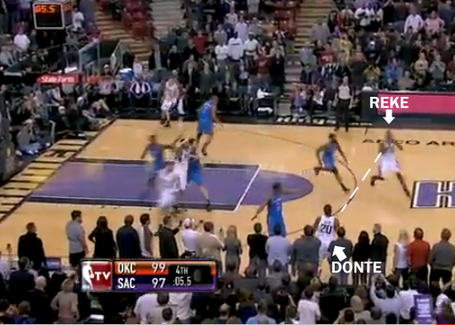 ... Donte goes to a wide open, no-risk Tyreke Evans. Oklahoma City obviously wanted to prevent the easy two, instead taking its chance with an Evans or Beno Udrih three-pointer. James Harden is covering Evans, sure. But he's definitely not denying the pass. Durant definitely is more concerned about Cousins in the paint than Evans beyond the arc. Even as the pass goes in, look at Durant. He's done his job by helping deny the ball to Cousins. (Note that Boogie is still calling for the ball as Evans receives it. He's less open than ever, though Evans has a better angle than Greene did.)

In real time, complete with Cousins' initial burst of anger. (Skip to 2:20.)

A few quick takeaways from my head:

* On the one hand: don't blow up your teammates right after a tough loss, especially without hearing why you didn't get the ball. On review, Greene would have had a tough angle getting the ball to Cousins precisely because Durant was denying the ball to the post, and because Collison was seriously contesting the entry. Greene looked to Cousins, and couldn't do it. I'm sure Greene could have explained that, if given the opportunity. I'm sure at some point Cousins -- other issues aside -- will realize that the play wasn't as easy as he thought it was.

* You've got to understand where Greene is coming from: he doesn't play much. He can throw a dangerous pass to Cousins on the block, with a serious possibility for a turnover or a deflection that leads to a broken play. Or he can get the ball to the Kings' best perimeter player with no chance of turnover or deflection. If he does the former and it's a turnover? He ain't playing in crunch time for a while, is he? And it's not like there's great personal reward if he does get it to Cousins. Maybe Boogie was just creating that needed incentive structure. "If you pass it to me next time, I won't punch you in the face."

* BASKETBALL PLAYERS! STOP FIGHTING EACH OTHER! YOU'RE ALL TOO PRETTY FOR THIS S--T!

* I'm not going to question the team's decision to suspend Cousins, or even pull him off the plane. I will say, though, that if Francisco Garcia was vehemently disagreeing with the decision, as Amick reports? I ride with El Flaco. I appreciate a fast and stern reaction from the franchise ... but Garcia is the team leader, and one of Evans' closest teammates. If he wanted Cousins to stay with the team and work it out? I'd listen. It isn't like Garcia is just Cousins' dude or whatever. If this was a proxy battle between Boogie and 'Reke, it says something that one of 'Reke's dudes wanted Cousins on the plane.

* Would you rather a prominent King call out Evans' uncreative and regularly unsuccessful crunch time plays now, or in 2-3 years when a playoff spot is in the balance?

* Speaking of O.J., neither he nor Tony Allen got suspended for their gambling brawl earlier this season.

* I'll say this about Cousins, in addition to the thoughts above: you ever have a fire -- on your barbecue grill, in your flambe pan, when you're camping, in the fireplace -- that refuses to go out? No amount of water or dirt or blowing will put it out. The attempts to put it out, in fact, make it stronger. That's DeMarcus. All this discipline this year ... it hasn't done one little thing to put out that fire. It's burning hotter than ever. That fire can rip through the Kings and destroy the team. Or it can be focused on the opponent, and it can scorch a path to glory for Sacramento. Which will it be?