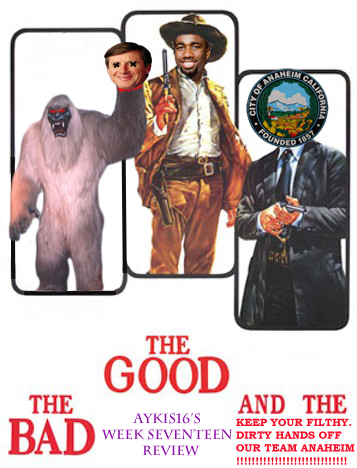 Remember when Cuz had Beno's back after Chris Paul knocked him down? Well Beno has DMC's back too.

What a roller-coaster week huh? That nice Phoenix win, with those two icky blowout losses, followed by a nice All-Star break and David Stern and the City of Anaheim trying to ruin all that is good in this world.

2.  DeMarcus Cousins in the Rookie Game

DMC didn't win the MVP like Tyreke did last year, but he did a good job representing Sacramento, scoring a game-high 33 points to go with 14 rebounds and 3 steals as the Rookies won for the 2nd year in a row 148-140.  It would've been nice to see Tyreke play as well for the Sophomores, but this way I didn't have to root against either player.  Good job Boogie.  You're definitely the co-MVP with Wall in my books.

After several disappointing games with Sacramento, Jermaine Taylor finally had a very nice game.  He got off to a hot start shooting wise, showcasing his athleticism in the open court, as well as a nice stroke on his three point shot (he hit 3-6).  Jermaine filled in Tyreke's shoes as well as you could've hoped, finishing with a career-high 17 points (7-12 from the field), to go with 5 assists, 4 steals, 3 rebounds and a block.  If he could utilize that athleticism to become a pest defensively and consistently play like this on offense, he has a chance to become a solid player in this league.  Do I think he does that on the Kings and thus becomes an answer to some of our prayers for added depth in the backcourt? Probably not, but if Tyreke misses more time due to the Plantar Fasciitis, we'll certainly get a chance to see.

4.  Quality Win in Phoenix After Turmoil

After all the ruckus surrounding the team heading into Phoenix, I don't think anybody expected them to win this game.  Instead we got the team coming together through the adversity and putting together a solid effort to come out victorious.  Sammy D had one of his "I Can't Believe You Did This" games, putting up 18 and 15 in DeMarcus's absence, and Donté had a super game as well, with 19 points in just 25 minutes.  Carl Landry was the driving force late, scoring all 20 of his points in the 2nd half.  Just a great team victory and one of the nicer moments of this season.

One thing the Kings have been doing well lately is getting to the line and hitting their free throws.  The Kings got to the line a total of 89 times (29.6 FTA per game) and hit 71 of them (79.8%).  That's a pretty big jump from averages of 24.3 FTA and 72.9% for the season (especially when you consider that those averages were lower before those games).

They do in fact happen, and here is one.  Listen to her Maloofs.

Tyreke had to miss the last two games of the road trip as well as the All-Star Weekend Festivities due to his plantar fasciitis.  He previously only missed one game all season directly due to the PF all year, but it seems to have taken a turn for the worse.  Evans met with a doctor in LA this weekend to get a new opinion, and we'll see what comes of it.  If Tyreke ends up shelving the rest of the year, I don't see too many more wins in our future.

The Kings have a bad habit of leaving shooters open when they switch.  Dallas took advantage in the 3rd quarter of an otherwise competitive game, and Jason Kidd led the way with 6-7 from downtown in that quarter alone.  Dallas as a whole finished with 13 threes on 50% shooting, a season high in threes made for a Kings opponent, and 9 more than the Kings that game.  It was the difference maker in the game.

Its clear DeMarcus isn't going to get much positive attention.  The stories that sell with him are those of a malcontent, one that might explode at any given minute.  One day I hope to see this change and instead focus on what he does on the basketball court.  But he'll need to do work on his end to make that happen as well.

4.  Inconsistency in the Rotations Again

Three games, three different starting lineups.  I know it was helped by DeMarcus missing one game and then Tyreke missing two, but its still pretty inconsistent.  JT went from starting back to the bench and only 9 minutes against Dallas.  Pooh didn't play at all against Phoenix and then played 38 minutes against OKC (albeit was a blowout with a game the next day).  Luther Head and Jermaine Taylor both started in Reke's place.  DeMarcus started at PF for the first time against Dallas.  It's just a lot of inconsistency, but the blame can't fully lie in Westphal, considering the inconsistency of our roster.

One thing that can lie with Westphal though is not getting enough touches for Landry.  With Tyreke out, Carl should be the go-to scorer.  He showed that again in Phoenix, and that was simply with DeMarcus out.  But against OKC, a team with no real defensive presence inside other than Ibaka, he only got two shots in 21 minutes (and still scored 8 points).  He played more against Dallas, but only got 6 shots for 9 points.  We need to use Carl to his full capacity if we hope to win with one of Reke-DMC out.  In fact, the only game the Kings won without Tyreke this year had Carl score a game-high 22 points.

6.  Beno Regressing to the Mean

After a poor shooting start to the season, Beno had a ridiculously hot December-January, shooting 50+% in both months.  He's only shot 43.2% so far in February though, and just 40% this week.  The Kings rely on his consistency, so it tends to throw them off when he shoots poorly.

I don't know what to say.  Am I overreacting to re-surfaced old news simply because David Stern is confirming possible talks? Or maybe its because March 1st is so close?  All I know is this doesn't sit right with me, and I hope that pookeyguru won't have to add a new listing to his "25 worst moments in Sacramento Kings history" fanpost.

2.  Craig Sager and His Stupid Face

We get it Craig Sager, you like attention.  Why else would you wear all those crazy suits?  But to throw DeMarcus under the bus during an awards ceremony is just callous and mean-spirited.  Screw you Craig Sager.

The Kings average 102.9 points given up in the NBA, or the 21st most.  Minnesota is the worst at 107.9.  In the 7 games Tyreke has missed, the Kings have gone 1-6 and given up an average of 121.3 points.  That's a huge difference.  Tyreke's not a world beater on the defensive end, but he's above average, and his replacements on this team are pretty bad as well.

The Kings have had a few "embarrassing" losses this season, but this was the worst in terms of point margin.  The team came out lethargically and OKC did not.  It almost reminded me of last year's season opener against the very same Thunder.

Donté had the best week of the season and earned some more playing time in my books.  He STILL can't hit a three pointer with any consistency, but he's becoming pretty good at scoring in the mid-range or by taking it to the rack.  This offseason could be a career changer for Greene, depending on how much work he puts in.  Getting a consistent jumper (especially from range) could be a game changer. 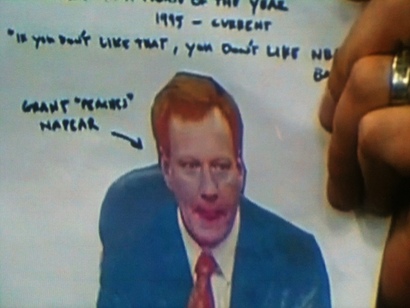 Thanks to fan neofreire663 for making the sign.  Wonderful, wonderful work.

Oh, and Craig Sager is not fit to lick Jim Grey’s sweat off of Grant Napear’s saliva off of Bill Walton’s hemp-scented balls.

The dunk over Curry was especially awesome.

Luther Head looks on, very confused as to why Barea keeps trying to put the ball in the basket

The Vfettke Would (Almost) Always Win if Photoshop was Allowed Caption Winner: Nobody! Because last week's picture was too lame to photoshop and so nobody did. 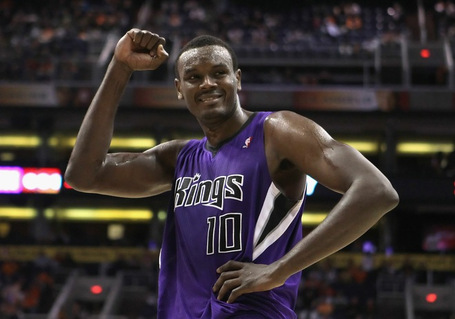 This week's caption contest winner gets a thingamajig with a doodad.

Lottery Projection and Profile of the Week: (With the season more than half over, its time to bring back this popular feature from last year)

Obviously the Kings biggest need on the court right now is a floor general, a guy who can get players the ball and keep the offense from screeching to a halt when times get tough.  It'd also help if this floor general could hit his shots and play some defense.  Kyrie Irving seems to fit that bill.

Irving isn't super athletic like the last few top point guards that have been drafted have been (Wall, Rose, Westbrook), but he's very efficient and mature for his age.  He's an excellent shooter (not Curry good, but solid) and decent defender.

The one problem with Irving is that he has only played 8 games this college season as he sustained a toe injury that will likely keep him out most of the year, if not the entire year.  Irving is still atop most people's boards (he's definitely the best point guard prospect in this draft), but he could decide to stay in College one more year, what with the possible NBA lockout and the fact that his stock may fall due to missing so much time.

I doubt Irving is on the caliber of franchise altering talents like Chris Paul or Deron Williams, but with Reke-DMC already aboard, the Kings can afford to take the safe route this time, and probably need to if he's available.

What does your gut tell you? Do the Kings file for relocation by March 1st (In a funny twist of coincidence, I have several things riding on the March 1st date in my personal life as well. Ugh.)?

Mine says yes, and I hope to God I am wrong.  GBU Week 19 will either be a very optimistic recap or a very depressing recap.  Be positive for me, you guys.

Nostradumbass Record for the Season 22 - 31