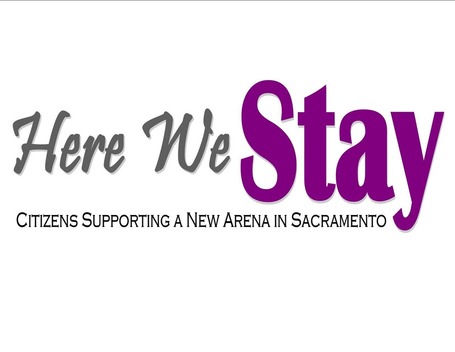 I apologize for no GBU picture this week.  The Yeti ate my free time this weekend.  Accept the Here We Stay Logo in its place, for this weekend at least, for it is neither bad or ugly.

An upsetting week overall, but there were still some good stuff, am I right guys?  Like the Orlando game... and other stuff...

After the Memphis game, Coach Westphal was asked why Sammy started over DeMarcus and he said that he thought that Sammy had been playing better and deserved the start.  I agree with him.  The three games before that he averaged 17.7 points and 10.7 rebounds off the bench, and obviously with better defense than the big rookie.  Sammy has started to win me over a bit, although I still cringe every time I see him shoot (I don't think I shall ever stop doing that) and I'm glad the Kings kept him through the deadline.  As long as we can keep him for a reasonable price this summer, I'm for it.  Hopefully the CBA helps us in this matter too, because Geoff Petrie has not been good in this regard recently.

Before the deadline, the most I thought the Kings could get for Carl was a future first round pick.  While I would've been alright with that, I was ecstatic when I found out that we got a nice young talent in Marcus Thornton for him.  I liked Thornton a lot last year, and thought he was misused by Monty Williams this year.  Thornton has already proven he can score a lot of points in this league.  If he can learn to do that consistently, perhaps as a scoring punch off the bench, I think he could be a very nice piece for the future for us.  I'm even more excited by the possibility of him and Tyreke together at times.  Both of them have to be treated as threats, and if opposing defenses gang up on one, it opens up the floor for the other.  Plus Marcus is a RFA so we have a much better chance of keeping him than we did with Carl.

What a great team win against a much better team.  Jermaine Taylor was especially good, scoring a career high 21, but everyone who played did their part to contribute to victory.  Luther Head's defense was a huge factor, especially in the 4th quarter.  The team needs to watch tape of this game and learn from it.

I'm so proud to be a part of this movement with all of you.  With all these rumors flying around and the uncertainty around the Sacramento Kings franchise right now, we were still able to sell out a late February game against the Clippers.  I can't wait till Monday to hear the ARCO thunder again, and technically, one last time as the name officially switches to Power Balance Pavilion the next day.

Omri's stats don't blow you out of the water this week, but to me at least, it seems he's been doing a better job of contributing asides from hitting spot-up threes, especially in the mid-range and attacking the basket.  One area he still needs to improve on is his strength, as he tends to get manhandled by bigger SFs in the post (see Jackson, Stephen).

1. DeMarcus Cousins Has a Bad Week

Yes, he's a rookie, and if you look at his stats they might not seem so bad, but for a rookie of DeMarcus's caliber, after the great last couple of months he's had, this was a bad, almost terrible week.  It was almost like a regression in his whole game, being impatient on offense and not trying on defense.  I wasn't upset with Coach Westphal's choice to bench him.  Hopefully that shakes him out of this stupor, although it is possible that he's hit the proverbial rookie wall as well.

My God is it atrocious.  Right now the only backcourt (not counting Tyreke and Cisco) player Sacramento has that is capable on defense is Luther Head, and Sacramento can't afford to play him big minutes.  Sacramento's interior defense isn't great either aside from Sammy, but even he can't do much when the guards routinely let their man get right to the rack each and every time.

What a disappointing rookie season for Hassan.  With Carl gone, he might've actually gotten some burn now too, but it looks like he's going to have to get surgery for his knee.  Hopefully next season he'll show off some of his promise in the NBA.  I guarantee he puts up better stats than he did this year: 2 minutes played, 2 personal fouls, PER of -18.3.  Yes, PER can be negative.

It seemed that Donté had turned a bit of a corner last week, but its back to square one with him.  The biggest problem with him continues to be his shot, not just from three, but from everywhere.  Only 5-19 from the floor in 4 games this week.

I like Pooh Jeter.  I really do.  But I don't see him becoming more than a 3rd string point guard on a good team.  He's already 27.  He turns the ball over a lot more than we were told he would (Turnover rate of 17.9%.  Tyreke is at 14.7% for comparison).  It would help if his three point shot was consistent, but its not (26.3%).  Point Guard is still the greatest position of need for the Kings.

Apparently Mayor Johnson might've blown some goodwill with the Maloofs after a scathing statement was delivered following the family's decision to file for an extension on the relocation deadline without telling Johnson.  KJ's statement reeked of CYA, and I hope it didn't piss off the Maloofs enough to not come to the Here We Stay night on Monday.

2. Blowout Losses to Miami and Memphis

I know we are without some of our main players, and both these teams are good.  But its almost like we didn't put up a fight.  We're better than that, and the team knows it too (see the Magic upset).

14 points on 6-22 shooting after 30 points in the 1st quarter.  Our offense completely stagnated and it derailed our otherwise good start.  Momentum is everything, and we lost it.  Charlotte took over from there, and that was all she wrote.

One thing every game had in common this week was that Sacramento turned it over more than their opponents.  Aside from the Miami game (12 turnovers), the Kings turned it over 18 or more times in the other three games.  That's way too many.

Beno stepped it up a notch this week, not only scoring at his usual efficient self, but also setting up his teammates at a better rate than usual.  Without Tyreke, Beno really needs to look for his shot more, because he's more consistent than any of his teammates.

Image / GIF of the Week: Kfipp had these great photoshops coming all week, check them all out:

We have worked hard all day and we have accomplished soooo much. I’m not ready to give up for this. We knew they would likely file before the 28th but that shouldn’t change our plans. Here We Stay is more than just an effort to build a new arena, we are now a community of people working their asses off to fight for what WE believe in.

I’ve said it too many times today, but I’m damn proud of being a Sacramento Kings fan. People have been working twitter like it’s nobody’s business all day. We have gotten endorsements from most bloggers around the country. Our story made it to the front page of Yahoo. I can bet anyone that there’s less than 1,000 tickets left for Monday’s game. And WE all did that.

One last stand, guys. If anyone is still willing, let’s just go down swinging. I know I will feel much better, no matter the outcome, after doing what was in my power to fight for what I believe in. If they’re gone, then they’re gone, but WE should all keep our heads held high because WE did the right thing and WE didn’t just sat and let it happen.

I can’t lie, I was also deflated as hell (probably still am), but if we all get down then not only is the team doomed, but our efforts will go to waste. I’m willing to be the idiot that will keep going. Anyone out there still willing to be an idiot with me?

"Children want what they want when they want it." ... Andy Sims

Sammy celebrates his victory in the slam-dunk contest after jumping over the Honda Center and slamming Craig Sager through the cylinder.

Though given ample opportunity to amuse each other with the caption contest for the GB&U, StR members could find no joy and supplied only half-hearted attempts at humor. Sorry SammyD, even your fadeaway has less of a chance of producing an amusing rimshot

The Vfettke Would (Almost) Always Win if Photoshop was Allowed Caption Winner: vfettke 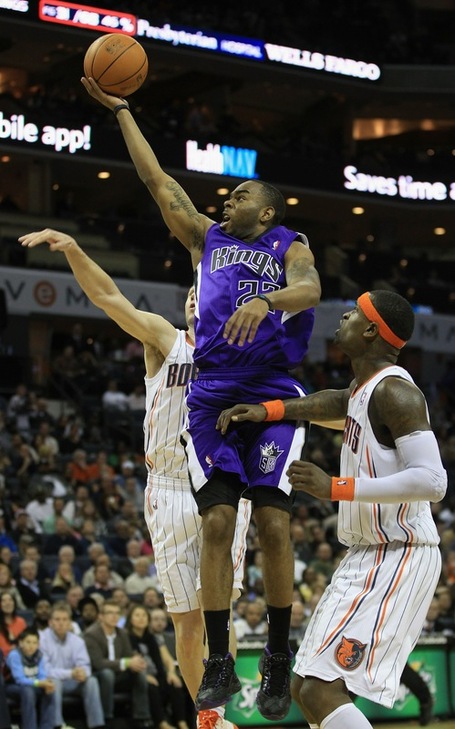 Did you like Derrick Favors last year?  Then you probably like Perry Jones this year.  Don't get me wrong, Jones and Favors are different players.  Jones is more offensive oriented, Favors defensive.

Jones is an explosive athlete and a great finisher at the rim.  He's shooting 57.7% so far in 27 games, but only averages 14.1 points because he doesn't see the ball as much as he should.  Most of his work comes from beating his man off the dribble or using his touch around the basket to score.  He's got good mechanics on his jumper but doesn't shoot it enough to have it as a consistent weapon.

The problems with Jones lie in his defense and rebounding.  He's not a good rebounder already, and despite his prodigious athletic gifts, is a poor defender.  That's usually an effort thing.  You have to want to be a good defender, and right now Jones hasn't shown that.

Still, a frontcourt of Jones and Cousins going forward could be extremely potent.  Jones is more of a project from a talent standpoint than Cousins was, but he has almost as much potential.

Do you think the Kings should've done more at the trade deadline or are you fine with what they did do?

I would've liked to see some more activity.  There were deals to be had for the right price, and waiting for the new CBA is good and all, but if you can get someone now, get someone now.  By the way, in case you hadn't heard, the Deron Williams to Sacramento rumor was false, Amick confirmed.

2/28 v. L.A. Clippers W (With the crowd pumping for Here We Stay night, I'm betting on our boys coming through with the win)

3/2 v. Portland L (Sacramento always has trouble against Portland, and now they have Gerald Wallace too.  This is gonna be a tough one)

3/5 @ Utah L (Utah did lose Deron Williams, but Devin Harris is more than capable himself)

Nostradumbass Record for the Season 24 - 33