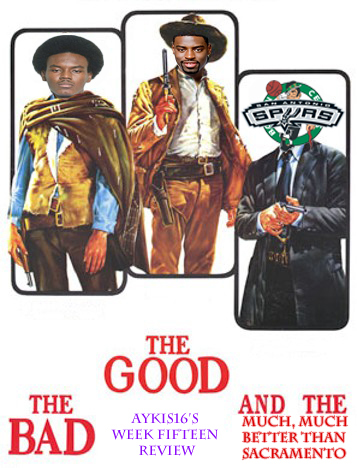 Like many other weeks this season, the Kings came up empty handed.  Yet this week was different as the Kings have nothing to be ashamed of.  They played the #1 and #2 teams in the league, chock full of future Hall of Famers, and they gave it their all.

In the 2nd quarter against Boston, Donté had 13 points on 5-8 shooting, including 1-2 from downtown.  He was a +16 during that time as well as he hit shots from everywhere on the court.  The problem with Donté, of course, is that he only does this once every blue moon.  For example, he has scored just 2 points after that quarter on 1-7 shooting.  This offseason will make or break Donté's career.  He's got all the talent in the world, he just needs to harness it.

In both games this week there was one guy who came in and seemed to make a major difference, and that was Pooh.  Against Boston he was a major part of the 2nd quarter run that turned a 7 point deficit into a 9 point lead.  He also helped bring back some energy against San Antonio, something that I thought was lacking in the first half.

5.  DeMarcus Keeping it Together Against Boston

I was impressed with how well DMC handled himself against the Celtics.  Boston gets away with a lot of pushing and slapping, and Garnett was probably talking trash to him all game, but it didn't seem to throw DeMarcus off.  Even the flap with Rondo ended up with Rondo getting the technical.  Westphal sent DMC to the bench as a precaution, but he did nothing wrong.  More impressive was his ability to get going in the 2nd half after a poor start.

When Darnell left the Celtics game due to shortness of breath, you had to hope that it was nothing serious.  Fortunately it wasn't, and he was able to come back and play against San Antonio.

The Kings couldn't get much going consistently against the Spurs, but Carl was one of the few that could.  17 points on 8-13 shooting is impressive stuff, as is the way he got it, taking it into the teeth of the defense and utilizing his excellent headfakes.  Now if only he could grab a rebound or two...

Its not just been Tyreke who has been more aggressive, its been the whole team.  The Kings shot 24 Free throws against the Spurs and 27 against the Celtics, and more importantly they hit most of them.  Getting to the line is an easy way to get points, as is attacking the basket, and the latter tends to lead to the former.

This doesn't mean much to our team right now since Hassan still hasn't played since the home opener, but its going to limit his ability to practice, and if there is anyone who needs to practice time its Hassan.

This was less Carl's fault and more him being out of position.  He was forced to guard Pierce most of the time due to the Sammy-DeMarcus-Carl lineup, and it led him to early foul trouble.  This is just my opinion, but I don't think we should be using that frontcourt when the opposing SF is of the Paul Pierce's caliber.

We've seen less and less of "Bad" DeMarcus as of late, but against the Spurs it was quite evident.  His shot selection wasn't the greatest, and we saw a return of the "I'm going to pretend to be a point guard and lose the ball because of it" routine.  Five turnovers mars an otherwise decent statline (7 points, 10 rebounds, only 2 fouls).  But his defensive rotations were exceedingly poor, and he couldn't get anything going consistently offensively.  Hopefully this is but a minor setback.

1.  1st Quarter Against the Spurs

The Kings came out lethargic at least to me, and while they picked it up later in the game, it was that early setback that doomed them from the beginning.

In both games the Kings inability to prevent penetration from the perimeter doomed them.  Rondo got to the rim at will, and so did Tony Parker, Manu Ginobili and George Hill.  Tyreke does a good job when faced with his man in isolation, but he's terrible at fighting through screens, and good opponents like the Celtics and Spurs know that.  One good screen up top on Tyreke allows Rondo/Parker/whoever to get right by, and too often help doesn't come in time.

20 turnovers against one of the top defenses in the league is not gonna get it done.  Yakety Sax y'all.

What stood out to me about Tyreke this week is how much more aggressive he looked.  I was exceptionally pleased with the 8 FTA he got in both games; There is no doubt in my mind that with his slashing ability he should be among the league's best at getting to the line.  Reke is finally back to his relatively consistent self, and if anything slightly better, thanks to an improved (but still not great) jumper.

Image / GIF of the Week: (I don't know how I missed this the first time but its an instant classic)

That's a great question. How could they not like this guy: Sounds like the name of Brad Miller’s Fantasy Team.

The Vfettke Would (Almost) Always Win if Photoshop was Allowed Caption Winner:  vfettke 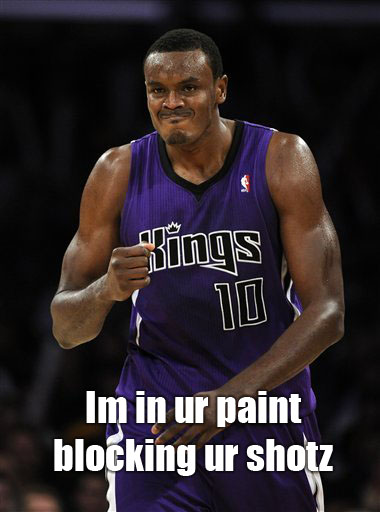 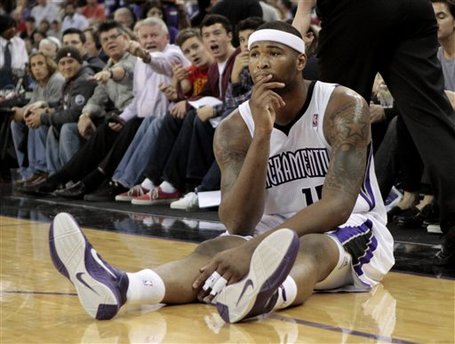 This week's caption contest winner gets a low-five from Kevin Garnett.  Wear a cup.

San Antonio and Boston are both elite teams.  What did you take from watching them this past week that you think the Kings could learn from?

v. Utah 2/7 W (Deron Williams might or might not be playing.  This is still a formidable opponent, but the Kings could eke out a victory if they continue to play as hard as they have been)

v. Dallas 2/9 L (Dirk Nowitzki is a modern marvel and the team has been clicking lately.  I simply hope for a competitive match)

Nostradumbass Record for the Season 18 - 29