You're A Loose Cannon, DeMarcus Cousins, But You Get The Job Done

Share All sharing options for: You're A Loose Cannon, DeMarcus Cousins, But You Get The Job Done

One of the wonderful things about watching DeMarcus Cousins this season has been the mystery, the drama concerning his day-to-day performance. Will DeMonster show up? Or will the sulky foul machine take over? It's been a real Jekyll and Hyde season, and -- my tongue is not in my cheek, I promise -- it's been incredible to watch. There's something within me that prefers drama over predictability. I don't believe I'm alone.

The other great about Cousins' spiking production is that it means he's had some wonderful spikes. This isn't mediocre one game and awful the next. It's HOLY S--T! one game and "Ugh" the next. You'd prefer five HOLY S--T! games in a row, right? But I'll take two or three out of five. That allows our hope some air, and DMC himself a glimpse at a future he can reach.

Favors has been far more consistent than Cousins. Looking at GameScore, John Hollinger's modified PER for individual game performances, Favors has been about twice as consistent as Cousins. (The standard deviation on Favors' GameScore is 4.1 For Cousins, it's 7.1.) Even if you dislike Hollinger's numbers, we're using them uniformly here. Look at anything you'd like: Cousins is more erratic in scoring, the glass, fouls, defense ... everything.

Here's a chart of the game-by-game GameScores for Cousins and Favors. 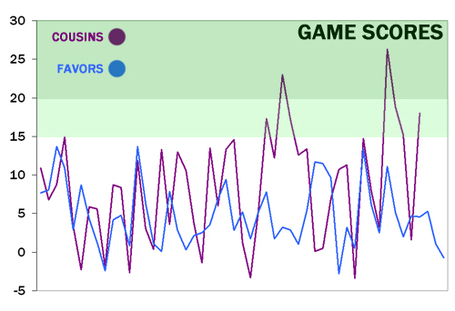 Just a ton of valleys for Cousins ... but look at those peaks! Would you rather have Favors' consistent production right now -- consistently average, at best -- or Cousins' wild fluctuations?

I'll take the screamin' ride DMC has presented. (It's worth noting that Cousins' crazy inconsistency has resulted in a PER of 15 even -- aka "good." Favors is at 13.1.)