The Making of a Memory

Share All sharing options for: The Making of a Memory 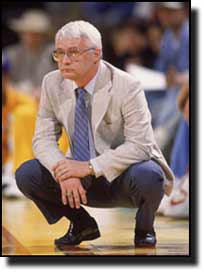 Pictured Above - A Gentleman

So I arrive at the arena last night at about 5:10, parking in my usual spot behind the practice facility. I have a few minutes to burn before I am to meet up with edm7 (Ed-V-P! Ed-V-P!), so I check in with Mrs. section214, take in about 45 seconds of Grant on the radio, and then I start to make my way over to the main entrance.

As I turn the corner of the practice facility, he comes into view. The one, the only Jerry Reynolds. I swear that the man gives off a slight glow.

I think that Jerry may be on his pregame walk, so I really don't want to disturb him, but under the circumstances I don't want to pass up the opportunity to convey to him how much I have appreciated his efforts over the years. The man built a time machine, for crying out loud, so I think that at least a little appreciation is due.

(Note - The purpose was not to interview Jerry, so I'm going to do a lot of paraphrasing here.)

I said something along the lines of "Mr. Reynolds, it's a pleasure and an honor, sir." Jerry gave me a warm handshake, and I hope that he asked for my name, because I followed with "My name is Rob, but I am also section214 at Sactown Royalty." (Come on section, I think to myself. Not so anxious - play hard to get.)

Jerry's eyes lit up and he said something along the lines of "Hey, I really love reading you guys...well, most of you, anyway. In fact, I find myself agreeing with you more than just about anyone else over there. That shouldn't especially make you feel good, but it is what it is." (Now at this point I am damning the fact that Jerry is married and I am straight, because I really feel like getting down on one knee and proposing to him.)

I say something stupid about us really working hard to maintain the integrity of the site, and how proud we are that we have really become the most comment-driven Kings site around. There are some great writers out there in the blogosphere, but we have somehow created the corner pub, and it is our members that make the site what it is, just as it is the Kings fan that brings the synergy and energy to arena. (Laying it on a little thick there, aren't you section?) Jerry agreed, noting that our site was the place to go if you really wanted to take the temperature of the true Kings fan. He offered no insight on the relocation situation (and I didn't press him), but he hoped that something could be worked out. My take is that Jerry is the consumate company guy, but he has also become a true Sacramentan during his 26 years here and that he would hate to see the team leave.

I mentioned that if the Kings did leave, the bright side would be that it would improve my finances, and that I would be able to spend more time with my wife. I then quickly added "Well, I think that being able to spend time with my wife would be a good thing." Jerry said that he and his wife have long contended that one of the keys of their successful 43 year marriage is that he has been gone for much of it. (Maybe I can get him to adopt me.)

Geoff Petrie wandered by at about this point. I said something clever like "Hi, Mr. Petrie." Petrie asked me if I was keeping Jerry in line. I responded that I always follow Jerry's recommendations, and it pays dividends 38% of the time. If life were a 3-point shot, Jerry would have me above the average. Petrie laughed politely and was on his way.

Pete Carill walked by next. I met Carill briefly at Morton's Steakhouse years and years ago. He was leaving the restaurant, and I was there at a business dinner. As he walked by, I said "Good evening, coach." (Good grief, can I ignite a conversation or what?) Carill put an arm on my shoulder, said hi to all of us, and may have even recommended the filet. The chandeliers shook in his presence. The years have gone by, but the man still carries that magic (and respect) with him. I trotted out my tired tried and true "Good evening, coach." Coachie gave me a warm nod, but made no food or beverage recommendations.

I was cognizant about not taking Jerry away from his pregame walk, but danged if he didn't look rather engaged in the conversation. So I asked him about team needs. It is Jerry's contention that the Kings need to bring in two very good players, and one needs to be the best player on the team. As Jerry and I discussed this, his take was that the stud that comes in needs to be the best player on the team today. That does not mean that (for example) Evans or Cousins may not eventually become the best player, but for this team at this moment, they need an alpha-male-lead-dog-stud-of-a-player. We talked about the draft pick for this next year, and agreed that if you could get such a player (Jerry didn't name names but I threw out guys like Danny Granger and Andre Iguodala and he didn't throw up or punch me in the face), you pull the trigger.

I really had the feeling that Jerry would have spoken with me for another 5-10-20 minutes had I pressed it, and he was giving me zero indication that he wanted to be on his way - no shoulder turn away from me, no looking at his watch, no eyes rolling up into his head...nothing! But I didn't want to overstay my welcome, and I knew that edm7 would dock me a day's pay if I kept him waiting. I thanked Jerry for everything that he has brought to Sacramento over the past quarter decade, and Jerry thanked me for my support.

Simply, Jerry Reynolds is a man that has had to work for everything that he has attained in life, but there is a part of him that realizes that he has done it within the confines of a game played by the young and young at heart. He is aware that his success is well-earned, but he gracious and humble and generous and warm and appreciative and real. In Kings nation, Jerry Reynolds is a national treasure.

So my evening is made, and it's still almost two hours until tipoff. I hook up with edm7, and I quickly start working the main entrance with him. (There was a gentleman already there by the name of Toby(?) giving out the chant fliers - the guy rocked). During my time outside the entrance, I met kromeace, talked with lietothegirls, and shared a bro-hug with muff209 (before he got all "shvitzy.") I shared a few minutes with jjham15. I met Aykis16's dad and brother (Aykis58 and Aykis12?). A personal favorite moment was when a guy came up to me and said "grantnapeareatskittens." I knew that this was his screen name, but it sounded so much like code that I couldn't help but laugh. I wanted to respond with "The eagle flies at midnight," or "My, that is a lovely bunch of coconuts." Overall, I was really struck by the sense of community, and how fortunate I was to have found Sactown Royalty.

The last epic pregame moment came when I met the one and only Tom Ziller. Amazingly, Tom and I had never met (I believe this to be largely due to Tom's efforts, and the restraining order that he took out sure hasn't helped). That said, if you've read him, you've met him. Bright, witty, not an ounce of pretentiousness. Sounds a little like Mike Tyson, though, which may explain why he keeps such a low profile. I also noticed that he had Howard Hughes-length fingernails, and he had a short little henchman on a leash - I think that he called him "Smithers." At one point one of the local TV cameras drew near and Tom gave out a wicked hiss. Suffice to say, perhaps we should stop pressing TZ so hard to make the StR nights.

The game itself and the fan involvement has been well chronicled. I will simply add that the team and the fans combined to make it an evening that I will never forget. I will never be able to properly thank all of those involved in the "Here We Stay" efforts for making the evening a once in a lifetime experience.

I don't know how all of this is going to turn out, and I'm not going to worry about it here. But I am going to reflect a bit, count my blessings, and thank each and every Sactown Royalty member for making this site what it is, and for allowing me to be involved in one of the best times of my life.