In the hours before Monday night's sell-out against the Clippers, the Sacramento Bee's Phillip Reese presented a quick analysis of whether Sacramento fans had already abandoned the Kings. It's a very short read, so please go over and consider the tone of Reese's writing. Basically, Sacramento fans are the worst in recent years in terms of supporting their team. In all leagues. (The issues about NBA-NFL attendance comparison are incredibly difficult; that Reese presents that data with minimal investigation is disappointing. Even NBA comparisons are wack because of the measures Reese uses; consider that ARCO's sell-out capacity is only 300 seats more than the NBA's average home attendance. If the Kings sold out every game, by Reese's measures Sacramento would still be around No. 15 in the league in attendance. That tells me something is wrong with the measures Reese uses.)

Reese's closing question: "But if you owned the Kings, would you stay in a town showing the following attendance trend line?" Then, he presents a graph that shows really bad attendance compared to Sacramento's usual attendance lately. He ignores (or undersells, really) the biggest factor in the lagging attendance, though. So I did him a favor and remixed his graph. It's below. 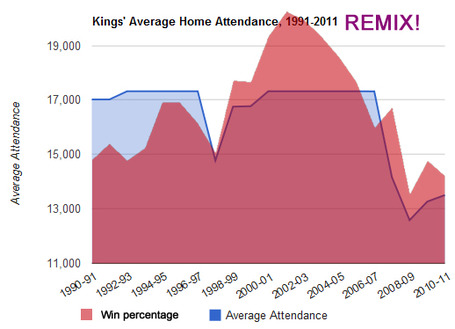 The red overlay is the team's winning percentage in each season Reese looked at for attendance. Strangely, winning percentage seems to coincide with attendance. The Kings have had one season in the entire 26 years of their Sacramento existence in which the team was over .500 and ARCO wasn't sold out every game, and that was the lockout-shortened 1998-99 season.

Attendance sure is down lately. Because the team sucks. Mix in a bad economy and boom, there you go. I imagine if In 'n' Out started serving bad hamburgers (heresy, I know), their business would suffer. I imagine if IMAX on Arden started showing really bad 3-D movies, the box office would suffer. Quality matters, especially in a down economy.

I appreciate Reese's work regularly -- he's one of the good guys, and valuable to our community -- and I disagree with Grant Napear's assertion that The Bee is responsible for pushing the Maloof family out of Sacramento. That's simply not true. A critical, digging press is necessary for an advanced civilization, and The Bee's skepticism on previous arena attempts has been justified. Readers deserve the facts laid bare, not just want one side or another wants you to hear.

As such, I think Reese ought to revisit his theory that Sacramento has given up on the Kings. His readers deserve a more full-bodied analysis.