This page has gone out of its way, and admirably so, to avoid name calling, blame laying and general mean spiritedness in regards to the Kings’ potential departure. Some of this is due to the general quality of the people and writing that frequents this page. Some of it is due, I think, to at least a subconscious belief that if we are kind to the powers that be, as opposed to antagonistic, perhaps it will appeal to the better angels of their nature. I respect this, I appreciate it, I applaud it. But fuck it. Let’s be honest. The Maloofs are fucking idiots. Half-wits. Fat, tan, sweaty, party shirted douche bags. 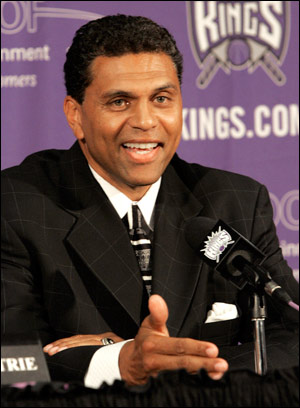 
What’s that you say? They’re millionaires? Clearly they’re doing something right? You’re right. They were great at inheriting their father’s fortune. And equally great at wasting it on stupid shit. Seriously, maybe it’s impolite to call them doofuses but these are guys that decided to film a national TV spot celebrating their fortune by showing them eating Carl’s Fucking Jr. I like Carl’s Jr. If I’m ever rich I’ll still eat Carl’s Jr. But if I’m going to flaunt my fortune to the viewing public I’d hope I could come up with something slightly more, I don’t know, sophisticated. Think of who else has done Carl’s Jr. commercials. Paris Hilton. Audrina Partridge. Kim Kardashian. If taste is defined by understanding the discrepancy between thinking things are good because they’re expensive and knowing things are expensive because they’re good we’ve had the ownership equivalents of Kim Kardashian. Which is great if you’re a (horse’s) ass man.

I’ve heard, and even thought to myself, that the Maloofs are perfect for Orange County. The fake tanned, subdivision, Buffalo Wild Wing capitol of the world (with apologies to Phoenix). Never have a city and an ownership base been more copacetic. But that’s not fair to Orange County. People in Orange County actually have assets. They’re real estate tycoons and consultants and professional surfers. They don’t dissolve their WNBA franchise or sell their distributorship or run a casino that still remains Las Vegas’ most popular destination for common-law bachelor parties.

The Maloofs and Sacramento were never a good fit. Sure in the heady days of the real estate boom they reflected a movement in town toward conspicuous consumption. But that was us at our worst. It was never an accurate depiction of the people on this page. The people in this city. The real fans of the Kings. Chuck Peterson an obvious exception, but he’ll look far more comfortable sitting courtside in Anaheim anyway, I’m sure he’s already started tanning. Sacramento does deserve a team. But it also deserves better. And it now looks like those two things, sadly, can’t syncopate.

On the positive side think about how much better we’ll all feel next year when the Maloofs are offering a "Bottle Service" option for Royal’s home games.